As far as that other thing goes, we seem to be holding steady and are even venturing out of the house and going so far as to let other people within five feet of us.  Quarantine appears to be over. 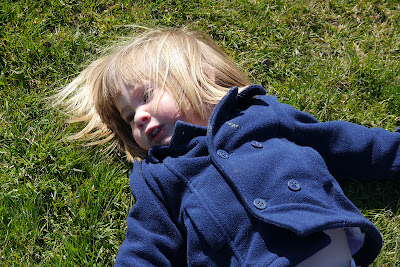 No, I'm back to that other problem.  The one I've talked about here.  And here.  And here and here.  Willow is once again refusing to nap.  Or go to bed.  Or sleep past 5:30.  We (kind of) have the going to bed under control--we're following The Sleep Lady's advice, and it seems to be going relatively well, if a bit slower than we'd like.  The 5:30 thing, well, it's light out and the birds are a-chirping so you kind of can't blame her, plus the early morning is Dave's shift so this kind of feels to me like the least of our worries (I am quite sure Dave does not feel the same).

But the naps.  Oh, the naps.  I CANNOT DEAL WITH THE NAPS ANYMORE.  I am this close to saying, fine, go without naps and go to bed screaming with exhaustion at 6:30 and never see your brother and sister or father, SEE IF I CARE!  But then I remember that my insistence on naps has much more to do with my need for ONE TINY LITTLE HOUR when I am not watching a small person to make sure she doesn't jump out a window or eat a light bulb.  Because she would.

Yesterday, for instance, we planned our entire day around jumpless-windows and sleepy-Willows.  After the 5:30 wakeup, we were easily out the door and at the special playground with the sandbox by 8:30, where I sat and stared in mind-numbing boredom as Willow shoveled sand (there are other things to do there.  She is not interested in any of those things) while Dave bought $300 worth of window guards.  We stayed until it was nearing naptime, and then we drove home.  She did not fall asleep on the ride home, so after her milk and cuddle time, I took her in her room to read stories.

For an hour.  And after an hour, I gave up, as my back was killing me, my legs were numb, and I was so frustrated that I doubt my voice was at all soothing.  I refused to read anymore, Willow flipped out, so Dave took her for a drive in the car to calm down and go to sleep.

He drove for half an hour.  Willow screamed the whole time.  And do you know what she screamed?  "That's not going to work!"  "I don't want to do this!"  Dave came home.

Okay, we figured.  Fine.  We hauled Willow back in the car to go back to the sandbox so Dave could affix the window guards.  Guess who fell asleep right when we got there?

Sometimes I think she's just trying to mess with me.

So, obviously, I was afeared for the nap today.  Especially since it's pouring out and not exactly conducive to running around until exhaustion.  (I did the best I could, though.  We stomped in some puddles). 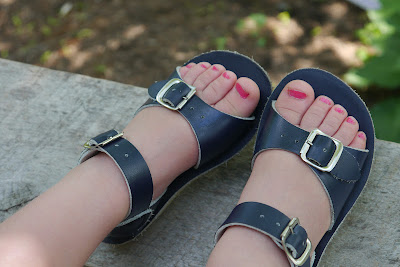 
But only if she took a nap.  And I reminded her of this whenever she got twitchy as we were reading stories.

Folks, it worked.  I know you're all shocked.  And you know what?  I DON'T CARE.  I WILL BRIBE THIS CHILD EVERY DAY IF THAT'S WHAT IT TAKES.


Even if it means getting silver and purple nail polish all over the house.

If it works, go for it.
And remember when she is 16 you won't be able to get her out of bed!

I found this blog though the Maile sweater link on ravelry. This is the first entry I've read, but I'm hooked after the admission of "mind-numbing boredom". THANK YOU! This goes unsaid too often and its my number 1 fear of having kids.

Oh man!! I'm not entirely against bribing. I do it occasionally when I'm desperate. Desperate times call for desperate measures, my friend! It's why I ran errands today with a lollipop in my purse, a backup lollipop in case he dropped it, and quaters for the rides in Walmart.

I think the best part is Willow saying, "this isn't going to work!" LOL My 2.5-year-old son must have heard us talking about how he'll be able to get out of bed when he's in a big boy bed and do whatever he wants... he recently said, "Nathan get out of big boy bed, go in family room, play with toys, get back in bed." I'm doomed!

I'm all for bribing. I told Parker if she doesn't get any more 1's on her school work (4's are awesome, 1's mean you're lazy) this year, I'll buy her a fish. The swimmy kind, not the yummy kind. Now I AM willing to buy her that fish, but I'm telling you right now, I won't be buying a fish.

Yeah, I think my problem now is figuring out a bribe every day. Should I offer up the Science Center today? Or just set aside a stash of treats? Ice cream?

And hey man, you might be buying a fish! And if you're anything like us they will ALL DIE.

I am 23 tomorrow and I still take naps... though that might be the baby taking all my energy away while he grows... But still. I have to bribe myself to sleep sometimes!