For those of you following the Saga of Willow's Sleep, I must report a small hiccup: on Wednesday night, we went to see RockNoodle's school talent show.  Which, for grownups, was of course equal parts amazing (RockNoodle's performance, those of her friends) and rather painful.  But Willow was unequivocally delighted, and as such was waaaaay too excited to sleep.

Fortunately, there was  no crying.  There was no calling for Mommy.  There was just intermittent chatter in her crib--she was trying to get herself to sleep, she just wasn't having much success.  We stopped hearing her about 40 minutes after I put her down.

And--that's fine.  Annoying, since I need to put her to bed figuratively as well as literally before I can relax, but at least she knew she was supposed to get herself to sleep and she managed it eventually.  But then I heard some intermittent chatter at 1:30 am.  The Sleep Lady advises rushing in to immediately soothe, so they don't wake up any more than they have to, but I confess I couldn't quite make myself get out of bed until I heard her actually calling for me.

She informed me that she was done sleeping, that it was time to get up.  I disabused her of that notion, and sat down next to the crib.  She argued with me for about five minutes, then gave up and lay down again.  It took her about ten minutes to fall asleep, which is a lot for her--usually, when she decides to go to sleep, she conks out pretty quickly.

I am not like that.  It took me a while to get back to sleep--and I was awakened before 2:30.  She was up and chatting with herself again.  And again at 5.  I did not go in either time.  She went back eventually.

I feel like this is still progress.  She couldn't sleep--I get that.  But she didn't feel the need to freak out and wake everybody up, and she did manage to get herself some sleep. On Thursday, she woke up and was awake for over an hour, but I never went in, and she got herself back (eventually).  I know this is not exactly what The Sleep Lady recommends either--but I don't want to create another habit I have to break, even if it means losing more sleep than might otherwise be necessary right now.  Besides, last night she didn't wake up at all! 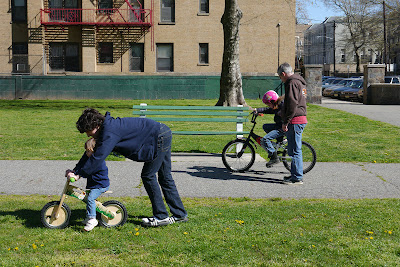 So I feel like this is cause for celebration.  But even more celebratory than that are the activities we did yesterday, activities that were so exciting and tiring that it's no wonder she slept through the night.  RockNoodle and Willow rode their bikes. 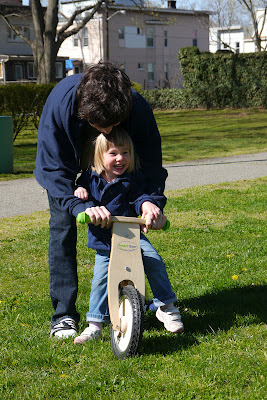 This has been a long time coming for both of them--we bought Willow her balance bike for her birthday, which was ages ago and snowy(ish).  It is, to be honest, a little big for her still, but she can reach with her tippy toes, and anyway she was having waaaay more fun being pushed around by Toaster anyway. 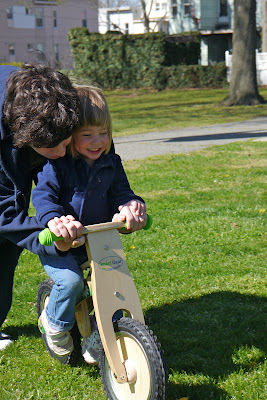 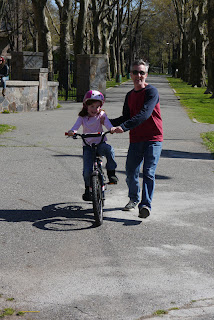 As for RockNoodle, this is something we've been working up to for a while.  And in the end, what worked, was taking the pedals off her bike so she could have a balance bike too.  When she reached the point where she was comfortable coasting down the enormous, steep hill we use for sledding, we figured it was time to try pedals. 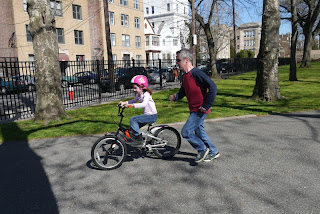 And off she went!  There were no falls, no tears of frustration, no terror--none of the hallmarks of my first time without training wheels. 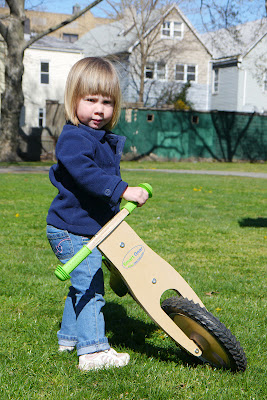 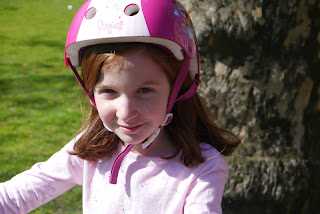 All in all, a banner day for everyone.
Posted by Nikki Van De Car

I've been following your Saga, and I can relate! It sounds like you're making good progress. Nathan naps about 50% of the time -- or less -- and today was the third day straight without a nap. (The few minutes before bedtime were horrendous.) Tomorrow will be the fourth. But before this napless jag he had napped for five days straight and I thought I'd won the lottery!

At bedtime, especially when he's had a nap that day, Nathan can take up to TWO HOURS to go to sleep. Usually it's about an hour and a half. But he finally stopped calling for us (one day we said, "Don't call mommy or daddy, just go to sleep") and plays with his stuffed animals until he conks out. We also stopped going in there to "reset him" because that was adding to the problem.

You're smart not to rush into Willow's room as soon as she waks up in the middle of the night, especially when she's just babbling to herself and not upset or calling for you. How else will she learn to fall asleep on her own? :)

When our kids were just babies, did we ever think sleep would be such an important topic?