So all those photos--that was the fun part.  Because on the flight home, we discovered we had the Plague.

Not that plague--no buboes, no black tongues.  No, it was much, much worse.  On the runway at LAX, halfway home, I scratched my head and found...a bug.  That's right, I am that person.  I am the person that you fear more than anything when you board a plane and rest your head against the seat.  I had lice.  On a plane.

I spent the the 5-hour flight leaning forward at a 45-degree angle, trying to put out of my mind the fact that, if I had them, then Willow almost certainly had them, not to mention that we had certainly brought them with us on the flights to Hawaii, so the damage was pretty much already done for those folks, so what was the point?

And when we got home to our mercifully unoccupied and therefore uku-free house, I locked Willow and me away in one room while Dave ran over to get The Stuff.  Fifteen minutes later, Sesame Street was on, towels were down, and the three of us were half-naked on the TV room floor picking stuff out of our hair like monkeys.

Except we hit a snag.  Literally.  My hair, which though it is Very Clean and Normally Not Bug-Ridden, tangles easily, especially in humid places.  Like Hawaii.  Plus it was so long it would have taken the entire freaking bottle just to do my head. 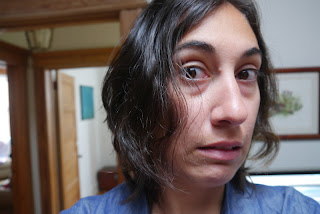 So I cut it off.  Or rather, I instructed Dave to do so, with no finesse, just one chop--which, by the way, dulled our scissors to the point where he was sawing through it by the end.

What can I say?  I panicked.  It was a lot shorter in the back--an inch long, in some places.

Anyway, I had them.  Willow had them.  Dave had them.  None of us had very many, but there were bugs crawling on my head, and on the head of my very small and squirmy child.  (Well, at that point they were all dead.  But still.)  We spent the rest of the day cleaning absolutely everything and bagging absolutely everything, including all of Willow Most Beloved and Necessary For Sleeping stuffed animals, so you can imagine how our bedtime situation has been of late. 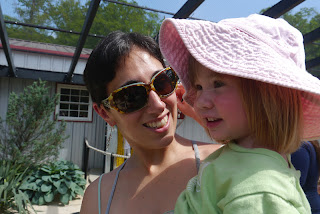 Now now. It's not THE WORST thing you could bring on a plane. It's not bed bugs or Ebola or... you know... a bomb! Still pretty awful, surely, but anyone lucky enough to be taking a trip to Hawaii can afford a little misfortune, so I'm not too concerned about the other passengers. Getting lice on the way to Delaware would just be cruel.

My kids went through a stage of getting head lice every week for at least six weeks, I tried everything but they just kept catching them. Then I bought some stuff called Mother Earth which was just a blend of essential oils, lavender, rosemary etc. They smelled fantastic and no more lice! You can try tea tree oil products but the best way to go is gallons of conditioner and a comb every night!