At the end of the tunnel, there may be light 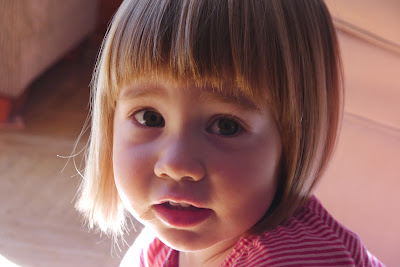 On Friday night, I was a desperate woman.  Not only was I having nap issues and middle-of-the-night issues, but (despite its being the rare occasion when we had friends over, and wouldn't I have loved to join the party) I spent an hour putting Willow to bed.  We haven't had bedtime issues (travel and illness-recovery notwithstanding) for over a year.  This was patently unacceptable, and something had to be done.  Immediately. 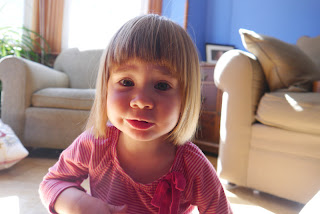 And so, following the commented suggestion of SB, I rode all the way to Union Square Barnes & Noble and picked up a copy of The Sleep Lady.  (I also picked up some monkfish, tomatoes, fresh milk, and a spring salad, lest anyone think I am immune to the allure of the Union Square Farmer's Market).  And I read it on the way home.

For those unfamiliar with her approach (as I was) it's an extremely kind and gentle cry-it-out.  We have tried Ferber many times , to some success--it's how we got bedtime happening--but usually it doesn't go particularly well, and we have always had to break a rule or two.  We had been psyching ourselves up for another round of Ferber, but knowing that it never worked in the middle of the night or for naptime, we weren't feeling all that confident. 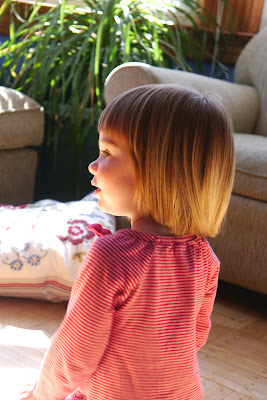 The Sleep Lady has you stay right there with her while she cries.  Which, let me tell you, actually sucks.  On Saturday night, I got up at 1:30, explained the situation to Willow, and listened to her cry and plead.  I frequently pointed out to Willow that I was right there, that I loved her, that it was all right--but she did not agree.  "Come out come out come out"* and "Snuggle for a while" and "Hold you for a while" are not things you want to hear when you're right there and could easily pick up your child and hug her and snuggle with her--it requires far more self-control to stay right there with it rather than watch tv and try to distract yourself from it.  But I managed, and after an hour and fifteen minutes, she gave up.  I watched her lay down, and go right to sleep.

And bedtime last night was normal.  Naptime yesterday....well, naptime was also normal!  In that it was buckets of awful!  She was overtired from having been up so much the night before, and absolutely would not go down.  Fearing that more overtired would lead to a poor bedtime, we walked her in the stroller until she fell asleep.  (I hate doing that, but like I said.  Desperate woman.)  Dave and I discussed it, and while there are certainly arguments to be made for having a come-to-Jesus at naptime as well as in the middle of the night--consistency, get it all done, etc.--to be perfectly honest, I don't have the strength.  I also think Willow is so freaking stubborn about naps that she'll transfer that stubborness to nighttime as well, and it'll just be a general disaster.

Which, so far, nighttime appears not to be.  Last night, after spending half the night dreading the worst, I got up with her at 4, listened to her plead--but not cry--for twenty minutes, after which she lay down and went to sleep.  Which is better than we ever got on Ferber. 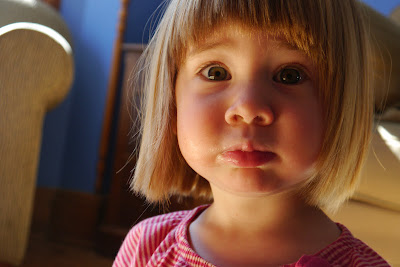 And she got a new haircut.  I LOVE IT.


*Ah yes.  We put her back in her crib.  This was partly because I couldn't fathom how on earth we were going to fix bedtime if she could just walk on out of there, but the eagerness with which she went back in makes it clear to me that she was not ready for her Big Girl Bed quite yet.
Posted by Nikki Van De Car

I must admit, I've never done any kind of sleep training since mine had a recurring ear infection, and I felt terribly guilty for being strict with him when his ears would burst the next morning (many times this happened!). We've since always snuggled him to bed, and snuggled him during the night. We were begining to think he'd never sort himself out and despaired a little (a lot!), but then, shortly before Christmas, we moved house (huge move, different countries, long story!) and so bought him a big bed and Thomas the Tank Engine bedding in the process. He's never looked back. He often (not always!) sleeps through, and often pushes me out of bed so he can go to sleep on his own. He's only fallen out of bed once, and that's because he stuffed it full of his toys and their was no room for him! After our recent experience, I'm a full believer that they come to it in their own time and be more secure for it, we just have to hold our will! I'm just telling you this story, because I share so much of your pain reading your stories, and think you're doing a great job, don't doubt your instincts!