What I Did Yesterday 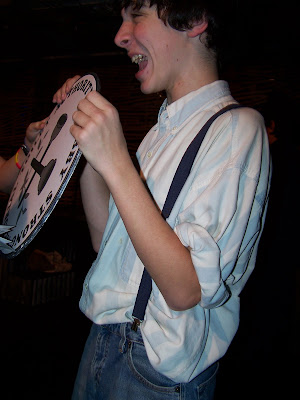 Toaster is actually happy in this photo, not terrified.  I went to see him in his most recent play, Urinetown, yesterday--and I went without Willow.  Totally weird.  Like I'd forgotten my purse or something.

Toaster was his usual great self, but it's so disconcerting seeing him out of the context of our house.  He's thirteen now, which isn't so very old, and yet it seems ancient.  Last year seems like it was five years ago, he's changed so much in such a short time.  I'm very familiar with Willow doing that, but I didn't really think kids kept it up past toddlerdom.  Apparently teenagerdom is just the same thing all over again.

And he's, like, really good-looking.  Check out those suspenders.  All the kids in the play didn't look like kids anymore, and I've watched these kids for years.  So yeah, the entire play was an exercise in feeling like I'd misplaced my child and Toaster's entire childhood.

Willow stayed home with Dave and RockNoodle, wherein she did not nap.  'Twas not for lack of trying on their parts, but the girl is, uh, still being nursed to sleep.  I know.  Bad, bad, bad, and more bad.  She was exhausted, and RockNoodle was all, hey, at least we know she'll sleep well tonight!

Duh, duh, duh.  Yeah, even then I had a sneaking suspicion that all would not be so simple.  Willow woke up at 1am, and Dave did his usual "No, no, time for sleeping, we love you, good night," but it didn't work.  She was sitting up her crib, crying.  He checked her more carefully, and she was slightly feverish--teething fever, I imagine, since there was nothing this morning.  He gave her tylenol, and said, "Okay, time for sleeping."  It didn't work.  At this point, we've all been up for an hour, and Dave is offering up two alternatives: either he takes her to sleep on him on the couch as in days of yore, or I nurse her to sleep.  Having fought so hard and so many times to wean the child from night nursing and having finally succeeding at making this the one sleep issue that doesn't involve nursing, I was sick at the thought of going through it all again, which I'm convinced that caving even one time will do.

Anyway, I didn't do it.  I went into her room, and she was at least lying down, so I patted her back for about five minutes and she went to sleep.  I think she was just exhausted at that point, and perhaps the tylenol had kicked in.

Am I wrong about this?  Will nursing once not lead down the path of nursing every night?  Because we're coming up on another trip to Hawaii and I'm frankly terrified.
Posted by Nikki Van De Car

I can't offer you any advice other than to say I still nurse my little one every night. He's never really slept right through and it's just easier for tired old me! I can't necessarily say if it's the right thing or not, as I'm due back to work later this week and have no idea how all that's going to work out, but hey-ho, that's the way it is!

The only thing I'm noticing is that he doesn't actually want boob so much during the night as he used to, so maybe they just decide for themselves when to cut it out?