After the flight on the way over to Hawaii, I was pretty much convinced that I would never, ever, not even a little bit again fly anywhere with Willow all by my own self.  It's not that she was ill-behaved--she wasn't.  She barely cried.  The problem was that she barely slept.  Which means that she spent really a long time sitting on my lap staring at the seat in front of her.  Until she just couldn't stand to do that any longer, and so we walked.  Up and down the plane.  For four hours.  It's not that big a plane.

When we got there, Willow seemed to be experiencing an ever-fluctuating Wow This is Awesome! and Dear God I'm Too Tired to Live.  I found myself explaining that I really have a very chill and happy baby, and this child who is exhausted but doesn't seem to believe in napping/sleeping/anything that isn't nursing, is some changeling, as if I got somebody else's bag at the airport.

Not really.  She settled down after the first few days.  And we did all kinds of fun stuff.  We went to the zoo: 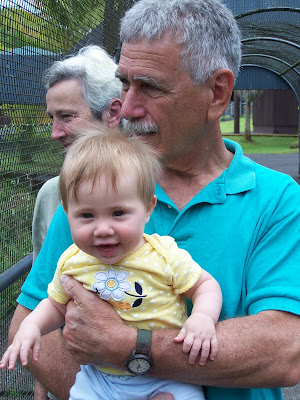 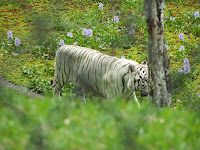 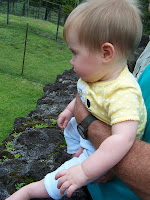 Where the rest of us saw boring things like monkeys and white tigers, while Willow was more interested in the fascinating walls and pipes.

I feel like I post too many pictures of Willow at the beach, but they're just so wonderful.  She is never so happy as she is there, and it's delightful to see.  That, and we were in Hawaii.  Of course there are pictures of her at the beach. 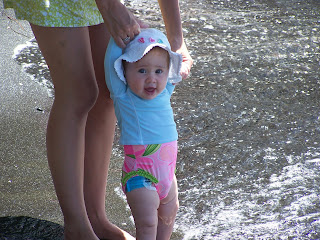 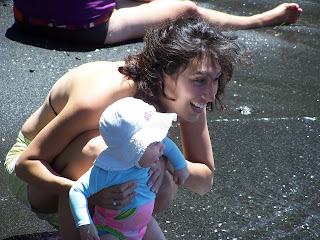 I'm trying to teach her to keep her eyes on the ocean, but all that sand is distracting.  Especially black sand. 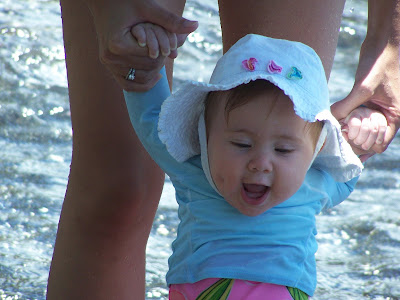 Plus there's singing to be done. 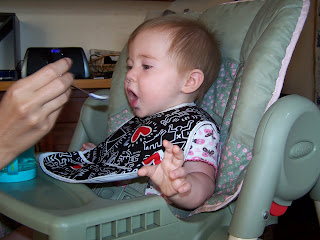 She ate poi for the first time to, er, somewhat limited success.  It started out yummy enough, but then we had to resort to Cheerios, and there was no going back.  Willow's Hawaiian blood may be thicker than water, but it is apparently thinner than poi.

On the other hand, beach love!  Surely that counts in the Hawaiian column! 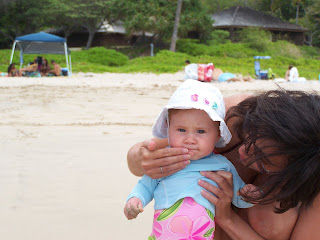 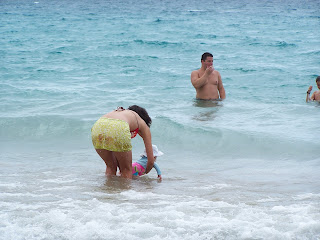 White sand tastes better than black sand.  And the surf is better too. 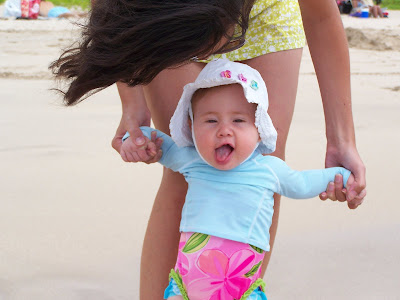 But the singing is just as good.

We are glad to be home.  But sleepy.  Willow finished her second nap before noon today.  But speaking of sleep--did you guys all know that airlines provide these little bassinet things that screw into the wall?   I didn't know that!  They came and got me and moved us to the front row, where they screwed in this little bucket that I put Willow in and that she slept in for five hours.  I didn't sleep, because it's kind of a shallow bucket and I was afraid she'd roll out (they have a net that you can put over her to keep her in, but it would have been touching her face.  Which would, obviously, have woken her up).  But five hours.  In which she slept, and not on me.
Posted by Nikki Van De Car

You have the cutest baby. Take lots of pictures, they don't stay little for long enough!