So here we are, a month later, and I have completely reversed my position.

Allow me to explain.  Last time, it felt to me like we were putting Willow down to cry herself to sleep to make things easier for us, because we were tired of the whole scene, and because we needed sleep, blah de blah.  That, of course, didn't work out at all, because making my baby unhappy made me feel way worse than a little lack of sleep--feh!  Sleep is for people who don't love their babies!

But recently, it became very clear that it wasn't just Dave and me who weren't getting enough sleep, it was Willow too.  Crazy not enough sleep.  She had gotten herself to a state where she couldn't fall asleep at night unless she was on someone, and she couldn't be put down to sleep unless she had been sleeping on that person for hours.  We tried everything.  We tried letting her sleep on me for a couple of hours (from, say, 8-10) and then putting her down.  Nope.  We tried letting her sleep in the bed.  Nope.  Nothing worked except Dave sleeping with her on his chest (and him upright) from 11pm until 2am--not until then was she willing to sleep in her crib.

It was awful.  Certainly Dave was exhausted all the time, but Willow was also exhausted--from being up so late, from crying hysterically every time she woke up, from sleeping on a person, which is not particularly good sleep, considering how they move and breathe and stuff.  She was getting (naps included) about ten hours of sleep a day, and it wasn't nearly enough.  Her days were spent trying to sleep, and failing at it--which manifested itself as a whole lot of crying.  It just wasn't good for her.

And so we decided to see if she was any better at putting herself to sleep than we were.

The first night she cried for twenty minutes, and I drank a lot of wine.  She woke up an hour after that, and cried for another fifteen minutes.  I drank more wine.  Don't judge me.

But after the first night, she hasn't cried at all when she's put to bed.  She goes right to sleep.  She still wakes up after an hour, and we go in and pet her and tell her we love her,  and she cries for another few minutes, and then is down for the night.*  Last night, she woke up after an hour, and had gone back to sleep before Dave even made it into her room to calm her down. 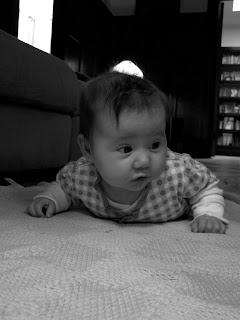 Conclusion?  Right decision.  She's a happier, more well-rested baby.  She isn't any better at taking naps necessarily, but I'm hoping that will come.  But she smiles all the time, she's more chatty and better able to interest herself in trying out new things, rather than just focusing on how tired she is.  She laughed for the first time today, an honest to goodness crackup giggle.  And I thought the smiles were the best thing in the entire world.* 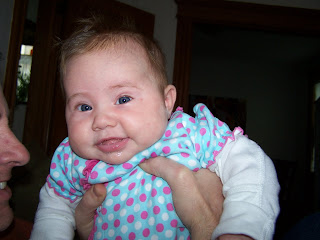 *Down for the night caveat: I'm still feeding her in the wee smalls.  She goes right back to sleep each time, and I'm hoping that she'll just grow out of this on her own time and we won't need to do anything about it.  We'll see.

*Smile caveat: they are nigh impossible to document.  This is a wimpy little half-smile.  The problem, of course, is that she'll be smiling delightedly at you, but has no earthly reason to smile at a weird metal camera thing.  That provokes only staring.  So this is Willow mid-smile release into blank stare.
Posted by Nikki Van De Car

Ahh, the parallel lives of Willow and Francie (well, mostly the crying jags and asterisk parts). Good to know we're not alone.