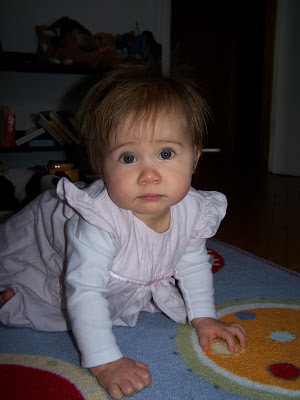 Well, it turns out the fever was not so low-grade, nor was it teething.  My girl is sick again.

No sniffles or anything, just a high fever and general unhappiness.  The first clue came yesterday when she would eat neither dinner nor Mum-Mums.  Something was clearly very, very wrong.

I hate when she's sick.  With an older kid, you can kind of hold them and pet them and let them watch a lot of tv, and they know they'll get through it.  Willow doesn't know what to do with herself.  She wants to play, but she doesn't feel up for it, so she reaches for a toy and then fifteen seconds later throws it away.

On the other hand, even if she doesn't know she'll get through it, I know she will.  It's nice now that she's been alive for a good long while and is fairly sturdy and I don't have to feel like the least little thing will mean serious injury or death.  Glad we've moved past that stage.

The college students are must be major in writing. That means they have a lot of facts in many writing tasks. In order to major in communications field students must take a thorough schedule of English lessons. It means a whole lot of essay writing. This task will help students in conversation. So writing an essay has these kinds of returns. Writing will help students to grow knowledge in best way. A best way is to adapt a method of essay writing which will justifies and streamlines the process. Instead of sitting down and writing an essay from the start to end. It is much easy to do all of your research previous placing each item. Even you can make use best essay writing service. These types of service may help you to add more believable points. Online resources can give more quotes. Even they provide strategies to your paper.
First decide what you want to convey in your essay and put it into words. Your entire essay will turn around this point. So make sure you are clear and brief in your wording. Find quotes from trustworthy sources. It will support what you have stated within your thesis. And relate to your first section topic. Mostly note what you would like to say within your end. Your conclusion part should detail how you are going to unite the topics from your aforesaid topics. Try to merge them together into one solid point. Students regularly make error a conclusion part as a summary paragraph when in fact. It is a chance to drive home your dispute. Your conclusion should about your essay and unite together to hardening your thesis. So know the rules properly to write a best paper for the college. This writing task has a major role in the today’s grade systems.