I suppose it's inevitable that once Willow was born, this blog became All About Baby.  Anyone reading it would think that RockNoodle's worst fears were completely confirmed, and we no longer love her, and for all anyone could tell, we barely even have custody of them anymore.

Is not so.  Not only are they here as much as ever, but we love them as much as ever, and I think (I hope!) we are as attentive to them as ever.  Okay, maybe not quite as ever, since there is a fifth human in our lives, and she is one demanding little pooper.  But we do our best.

I think the blog ignores them because my days are all-consumed by Baby, and I am the one typing this after all.  And generally, she has the good stories, partly because I am free to make fun of her all over the internet.  (I don't think RockNoodle would appreciate it if I told the internet about her unfortunate socks-under-sandals fashion choices, much less the infinitely scarier ventriloquist puppet makeup she draws on her face.)  (Oops.)

And this may not be a good story, and it certainly isn't in the make-fun-of-him category, but I've got to say something.  I've talked before about RockNoodle and Toaster's musical theater endeavors, and I've mentioned how Toaster always makes me cry.  RockNoodle doesn't.  She's a delight to watch, partly because she's just in it to have a good time.  She's always a step behind on the dances, frequently misses cues, and when she has messed up, and you ask her about it afterward, she just says "Oh, yeah, I forgot to do that."  It's charming and fun and easy for her.

Not so Toaster.  If he messes up (a rarity--he's good.  Really freaking good, but that's not what this post is about) he is furious with himself.  He knows every song and every line and while he does have a great time, he pours so much of himself into it that he is both physically and emotionally exhausted.  This can be maddening when you're trying to convince him that yes, he does have to do his homework even though he's tired from rehearsal, and yes, he does have to go to school even though he's tired from doing his homework, and yes, we are terrible people who make him do completely unfair things.  (Of course, to be fair to him, we didn't go through any of this--at all--this time around, which is impressive).

And then you see the show. 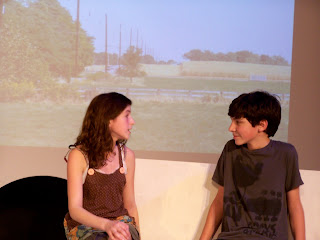 I don't know if anybody is familiar with Thirteen--I wasn't--but it's a surprisingly funny, moving, and catchy show.  It opens with Evan/Toaster singing about how his parents are divorcing, his life is changing, and almost against his will, he's growing up--and he doesn't know how to handle it.

Bah--Gah--eyes watering.  I can't explain how it feels to see a child you've parented (stepparented?) step out under some bright lights and suddenly, before your very eyes, through some mysterious alchemy, become not a child anymore.  You met him when he was seven (and oh, how I know how much worse it must be for his mom and dad) and he read and talked and danced during little league games, and of course you've noticed that he's taller, and you've noticed that he desperately needs deodorant, and you've noticed the voice getting huskier and the peach fuzz appearing on the upper lip, but none of that added up to anything until you saw him kiss a girl onstage and sing about the things you know he's going through but you just don't really think about between all the bath times and the dinner's ready's and the diaper changes and the did you remember to's.

They kiss on stage at that age?! That's it. I'm locking my kid in the closet.