No....not possible.  A knitting post?  On this blog?  Practically unheard of!

I know.  It's been, uh, a while.  But I not only have knitting to discuss, I have colorwork, y'all.  Thus far, I have only dabbled, and so, with great trepidation, I embarked on Fair Isle Yoke, from Susan Crawford's A Stitch In Time, Vol. 1. 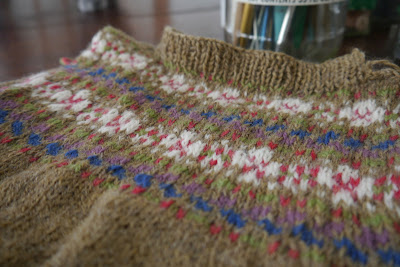 Ages and ages ago.  And I kinda got stuck.  It wasn't the colorwork that killed me, it was the acres of single rib and the interminable stockinette.  But I have now finally gotten to the good stuff.  And I have to admit, I'm kind of hooked now.  I mastered the two-handed knitting on the right side, but purling with two strands at a time was frankly beyond me.  Still, the result is fairly even, and I'm not gonna lie.  I'm pretty damn proud of myself. 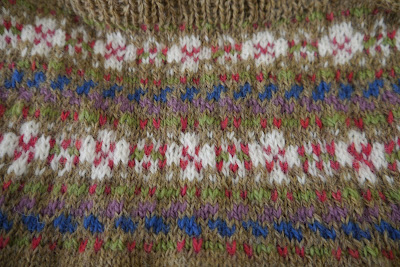 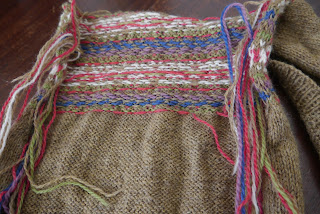 But then you turn it over.

What the hell?  That is a crazypants number of ends to weave in.  Was I supposed to carry the green (and the purple, and the red, and the blue, and the white) back and forth for five rows (or ten rows, or twelve)?  Because even if I knew how to do that, which I don't, it seems bonkers.

Also, the neckline and chest seem a little tiny, even though I knit a bust-size up (I try to be generous to myself).  It might be the fault of the colorwork, which doesn't give as much as regular stockinette, obviously, but the back seems small too.

I'll find out soon enough.  I want to wear it on Christmas (hence the snowflakes).  So that's, um, a sleeve, endless end-weaving, and the sewing.  Totally doable, right?

see you finished, and it looks great on you. ah. accomplishment. sorry i didn't see you when you were here. next time.