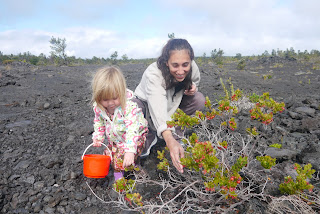 We didn't exactly leave during Thanksgiving dinner.  But after making scrambled eggs for breakfast, and finally taking Willow to do the one thing she'd been asking to do the whole trip--picking Ohelo berries--we settled her down for a nap...and ran out the door.

It was not easy.  We had been planning this for months, and had in fact discussed with Willow, as much as a not-quite-two-year-old can comprehend this kind of thing.  And everybody was nervous, including my parents, because while we see them as often as we possibly can, that still means that months and months and months go by without any face time, making it difficult for them to a) understand Willow when she talks, and b) know all her routines and foibles.  I typed up a detailed schedule, and hoped for the best.

This was me on the two-hour drive to Kona, where we had booked a hotel for the night: "Do you think she's awake yet?  Do you think she's going to be okay?  I think it'll be good for her.  It's important.  You know, to create a little distance, so she doesn't need me with her all the time.  I hope she has a nice long nap.  They'll let me know when she wakes up, right?" 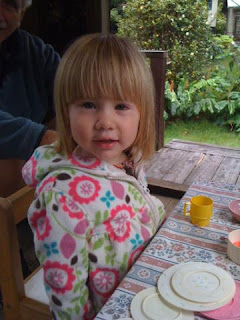 They did, in fact let me know when she woke up.  At 2:45 pm, I received the following: "Drinking tea with Grandpa." 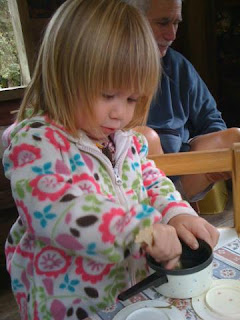 And at 3:00 pm, we were informed that she said: "Make scrambled eggs, just like daddy."* 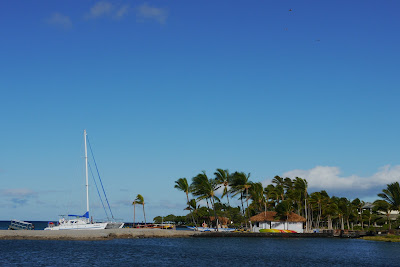 At 3:30 pm, we arrived at the hotel, at which point Dave ordered me a pina colada and told me to put away the phone. 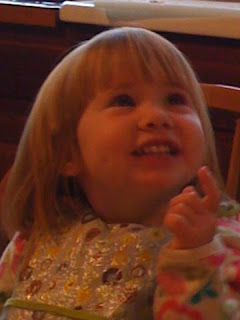 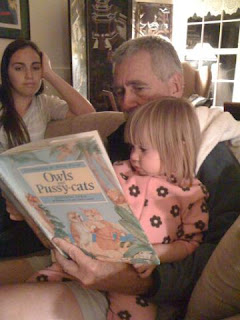 At 4:15, Willow was introduced to the family tradition of singing Walk Like A Man.  She skipped the drinking a lot of whiskey part.  I think.


At 5:30, she was introduced to the family tradition of suffering through my father's rendition of The Owl and The Pussy-Cat.

At 6:00 Dave and I went to dinner.  The waiter asked me to put away my phone.

At 8:30 I wrote demanding to know how bedtime had been.

Not bad for a first time away, I'd say.

You probably had a worse time than the baby, but that's how it goes. Congratulations on getting through it!

Good for you for getting away! It's so important. I didn't even get a night away from Parker when I had the second baby. I'm going to be bitter about that for a few years.

Huh? How's that work? Good lord, you didn't home birth, did you? My respect for you just shot up, and now I have to go give myself a talking to.

No no. No home birth. Please. I hated my rental, but not enough to do something like THAT in it! Our neighbor friend was going to watch Parker for us, but the baby was two weeks overdue and she had to go out of town for the holidays, so we were on our own. We waited until the last possible minute (7cm, but it's not like I knew that), woke Parker up and dragged her with us to the hospital. She whined about being hungry and sleepy the whole drive, and then for 10 minutes more, while Jay circled the hospital trying to find an unlocked entrance. She sat in the corner of the delivery room, but didn't really see anything... mostly because Jay forgot her glasses. It wasn't ideal, but childbirth rarely is.

Ha! Wow, I'm not sure I could have hacked that. Like home birth frightens me, but the idea of dealing with a whiny child AND a brand new screaming one...yikes.