After five days of high fever, we had pretty much given up on going up to Massachusetts for Thanksgiving.  I baked an apple galette, but Dave and I ate part of it on Wednesday night.  We ordered enough Chinese food to feed an army, figuring everything would be closed on Thursday and Friday.  All of this, of course, ensured that she woke up miraculously healthy on Thursday morning.

We still weren't sure we should go--there was nothing saying her fever wouldn't go back up.  But she seemed herself again, exhaustion notwithstanding, and Toaster* and RockNoodle really wanted to go up to see their cousins, and we really wanted to go up to eat good food, not to mention how sad would it look in the baby book?  First Thanksgiving: stayed home and cried. 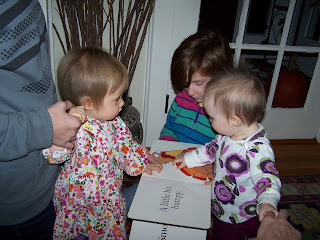 So off we went.  Willow slept most of the ride up, thank God, except for how it meant she wouldn't take her afternoon nap.  We went over to Francie's house for dinner, where the girls discussed turkey anatomy and the merits of dark meat. 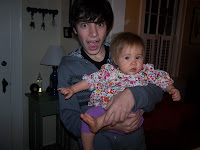 After five days of fever, I was on baby vacation, so Toaster did much of the Willow-watching, while RockNoodle walked her cousin Francie around.  (Yes, Francie's practically walking.  Overachiever.)

I drank wine and talked baby food with Kate.  Which was good, because when it came time to actually eat said turkey, neither Kate nor I had prepared anything special, figuring that our girls would love turkey and bourbon sweet potatoes and stuffing because honestly, who doesn't?  Only they melted down.  Willow kept rubbing her eyes and asking to go to bed in all the ways she knew how--"Can I nurse?  Great.  Now where's the bed?  No?  Not yet?  Oh, come on.  Please?"  It was terrible.  I know the food was delicious, but I can't really remember tasting it.

Willow's lack of nap meant that she was a super tired baby the next day, and our morning was such that by the time I got her down I had closed her in with all my clothes.  I ended up wearing Dave's pants to go shopping, and this circumstance led to him meeting us  us at Uncle Brian's house in my pants.  Dave fits my pants.  This is not pleasing to me.  There will be no photos.

We had a sort of second Thanksgiving on Friday night, wherein Willow and Francie continued to reinforce each other's growing toddler habits:

Willow: Oooh, chicken!  I love chicken!
Francie: Yeah, but you know what's even better than eating chicken?  Throwing it on the floor!
Willow: Whoa!  That's SO much fun!  I think I'll refuse all food and only throw things on the floor!
Francie: I think I'll get out my high chair so I can eat the food you threw on the floor.
Willow: You do that.  I think my mommy will cave and feed me only mum-mums and bread if I refuse everything else.
Francie: Clever, very clever.

Yep.  This is going to be the story throughout their entire childhood.  We're screwed. 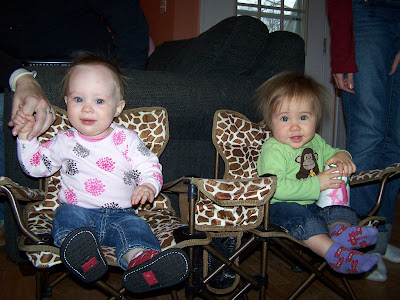 Aw. Glad she bounced back in enough time for all of you to enjoy the holiday. P and I have been stuck together 24/7 for 9 days due to illness/snow. I can't believe we're still speaking to each other!

I LOVE it!!!!!!! My favorite from my Thanksgiving was how "Bean" (that is our nick name for her) sifted through the jello mold and sweet potatoes, using her mouth, to remove the pineapple because she didn't like it. Aren't children quite interesting....or as you correctly stated how could they not like the jello mold cranberry sauce and marshmellow sweet potatoes.

Hilarious - love the turkey discussion bit accompanying the turkey picture. I left that second dinner really coming to terms with the fact that my daughter just might be a rascal.