Okay, so I have a slight problem.  Remember when Willow's doctor said she wasn't putting on enough weight, and we should feed her however much she's willing to eat?  Yeah, that's not going to work.  Because Willow already eats as much as RockNoodle does, and if I let her she would go on to eat all the food we have in the house.  Seriously.  It's frightening.  The child has no sense of self-control, and she will eat herself sick if we let her.

Also, and this part just isn't fair because it's way too early and I wasn't supposed to have to be doing this for ages yet, and it just means my little girl is growing up way too fast and I don't  know how to stop it, but we are at the point where we have to spell things out.  Already!  Messed up.

And whose fault is it?  Aunty Kate, I'm looking at you.  You and your drug-pushing ways. 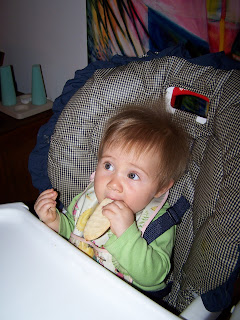 Aunty Kate introduced Willow to these innocuous-seeming things called Mum-Mums.  They are little dissolving rice husks, and are apparently great for introducing babies to their first solid foods.  And Willow is addicted to them.  I have to ask Dave, "did you pack the m-u-m-m-u-m's?" because the word "Mum-Mum" sends her into a frenzy of ecstasy.

As I said, messed up. 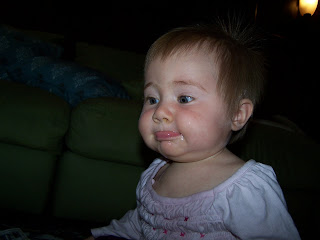 If I have to check her into a Mum-Mum rehab facility, you're footing the bill, Kate.
Posted by Nikki Van De Car

I have a 9 year old daughter (Emily) who has been keeping tabs on Willow since she was born. She thinks Willow is the absolute most adorable baby ever born. I haven't shown her the latest pictures and I know Emily will be thrilled.

That's awesome! And so flattering! Though of course all of us here agree.

One: better send her to the state-run rehab, sister. I'm broke.

Three: that bottom picture - the lip thing - is SUCH a common sight around here too.

What's the deal with the Hurly/Hugo face? Is it a developmental thing? She says "babababa" with her upper lip sticking way out, and we're just never going to tell her that it isn't strictly necessary.