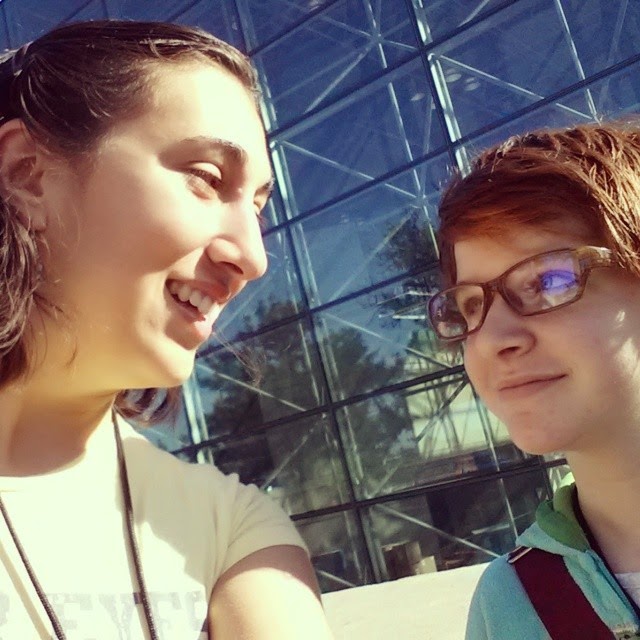 So RockNoodle and I went to BookCon this past weekend, and she was by far the predominant demographic, but there were plenty of grownups lining up to see Veronica Roth and John Green and Cassandra Clare and Holly Black and Maggie Stiefvater (!).

And it got me thinking.  I read a lot of YA.  I have never really questioned this--I just really like it, that's all, and I always have.  And I mean always.  From the time I was able to read novels, I was reading what would now fall under the umbrella of young adult.  I was used to the characters I read about being older than me, and I remember being so excited when I was finally the same age as the characters in the books I read (like when I was ten, and I was the same age as Alanna when she went to the palace to pretend to be a knight...that was awesome).  And of course I kept reading, and Alanna kept getting older and so did the other characters I read about, like Sally Lockhart, who was actually an adult with a child by the end of the series, but you would still find it in the children's section, a fact that now strikes me as odd.

But slowly, I became older than the characters I read about.   I think there are several reasons for this, the most obvious of which is that YA became an even more exciting genre, with lots of children and adults of all ages reading it, and it's a huge umbrella with really nothing bringing it together other than how its characters are between the ages of fourteen and twenty.

But why those ages in particular?  I get why the readers who are that age are interested, but why are the rest of us looking back?  I think it's because we as a culture consider that period of life pivotal--you are on the cusp of becoming an adult, and you could be anything at all.  It's a very exciting time, theoretically.  But I know that I found my teenage years neither enjoyable nor particularly formative.  College had a more profound influence on who I am now, but not in the ways that you might think.  If I had to point to a time that I consider pivotal, it would be meeting Dave and deciding to be a part of his life, and what that meant for the kind of adulthood I would have.  I was twenty-three.

So maybe that's not that far off the age range for YA, and maybe I'm just a late bloomer (actually there's no maybe there).  And the next pivotal point for me would be having Willow five years later--at the ripe old age of twenty-eight, which is decidedly not YA, and parenting really isn't something that is considered or discussed in YA, or not the books I read, anyway.  There's a reason for that, sure--I like to escape as much as anybody else, and I'm fascinated by mythology and why and how we use it, and if I'm going to read a book, I'm thrilled if it's got spaceships and magic and selkies.  But all good science fiction or fantasy novels talk about real lives through the lens of magical spaceship life, and have something relevant to say--it's not just escape.  So why are these books relevant to us grownups?

I have zero interest in adult malaise and wanting to have an affair and being bored with your life and your children or any of those novels; however well-written they may be, they make me want to slap someone.  Is that what I'm supposed to be reading now?  'Cause I'm not gonna.  But though I do and will always love YA, I wouldn't mind if I could read about parenting and spaceships.  Or watching extended relationships with werewolves, not just the beginnings of them.  Because I don't think that our teenage years are our only pivotal ones.  God forbid we stop believing we have the opportunity to change who we are.  (Perhaps that's the point adult malaise novels are trying to make, but they're so depressing and self-obsessed.  Maybe if there were some vampires thrown in or something.)  I have rewritten a lot of myself since Willow was born, and plan to continue doing so.  My personal goals have changed enormously, almost as much as if I'd suddenly discovered I have fairy blood.  I'm thirty-three, and I have more in common with fictional teenagers than with fictional adults--but parts of my story are still missing.  The Raven Boys could easily have been written about adults, but Maggie Stiefvater chose to write about teenagers, which makes me simultaneously glad and sad.  I'm glad that there are books about smart, mature teens.  I'm sad that there aren't books about curious, malleable, and wistful adults.
Posted by Nikki Van De Car

I think those fairies in the Arb really let us down. Jerks.

I am really glad that I can reinvent myself in my thirties. It seems in some ways very scary not to be following the template of a lot of other people - but also liberating!

I've always thought reading science fiction and fantasy books helps me keep an open mind and see opportunities for things getting better. This was something I desperately needed when I was young and continue to make a place for in my life.