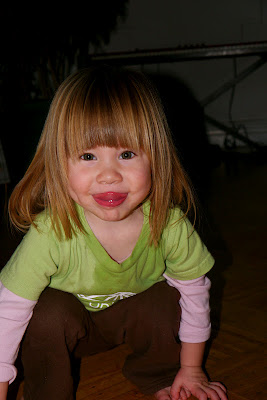 It seems that right now, everything is in this incredibly efficient state of matter and energy conversion.  If, you know, matter was bad and energy was good.   (Just go with me on this one).  For instance, last night we had an electrical outage.  Now, for some two-year-olds, this could have induced hysteria and an insistence that we Turn The Lights Back On Now.  But not Willow--oh no, Willow danced in circles giggling that we were all in the dark and wasn't that amazing?

Great!  Except for this morning, when she asked us to turn the lights off again, and we explained that we couldn't that it was daytime, and the sun was giving the light.  "NO.  NOT DAYTIME.  TURN THE SUN OFF."

Right.  And on the flipside, we cannot change her diapers anymore without rage and screaming and bribery and mud-wrestling.  "Yes I do want to sit in poopy.  No new diaper.  Nooooooo!  No Diapers!"  Which is deeply unpleasant for everyone, but surely indicates that we are ready for potty-training and that will all go very smoothly and wonderfully?  Yes?

Similarly, I have finally for the love of God finished the stockinette section of Paper Dolls!  Hallelujah!  But I can proceed no further.  Because I don't have the needles I need.  Because a certain toddler will not go to Hoboken with me to hit Patricia's .  Because Einstein says I can't.  I have to put my energies elsewhere.

With few exceptions, I am pretty good at making sweaters for myself.   I am not so good at making them for other people.  They invariably turn out either too big or too small or they just don't suit--and I don't blame myself for this particularly, as I can't usually try the sweater on other people and I don't have their arm lengths memorized and what I think sounds like fun to knit doesn't necessarily equal fun to wear. 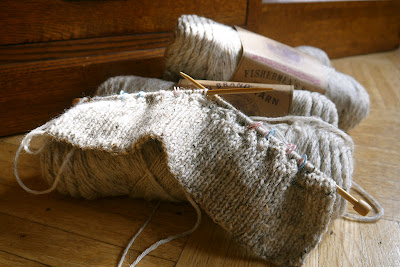 But after numerous failed attempts, I decided to make my mom something she wanted, and that would fit her.  After some haggling, we settled on Lion Brand's Aran Pullover, I extracted measurements, bought yarn, and here we go.  And mom's birthday's in April.  And I'm not super-experienced with cable-knitting, so while I'm confident I can do it, it's not exactly going to fly.  And so really, I don't have time to work on Paper Dolls, I shouldn't work on Paper Dolls, and the needles, the toddler, and Einstein can just quit ganging up on me because I get it and I've put Paper Dolls in the closet, so just leave me alone, okay?

And anyway, it's pretty fun too.  Single-rib may be boring, but it's waaaaay more interesting than US 2 stockinette, and now I've actually got some cables going and it's going to be an adventure. 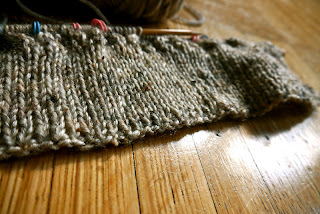 I even cast on using June Hiatt's special single-rib cast-on.  How does it look?  Any different from a regular cast-on?

I feel like I'm constantly at wits' end, struggling to tread water and just keep everything from exploding (nothing like fire and water in your mixed metaphors)--but at the same time finding joys in things that are not normally joyful, like darkness and running up and down hills and finding triangles and squares and circles all over the house and playing hide-and-seek in such a way that doesn't involve actual hiding.  Or sometimes even seeking.  And there's probably some kind of philosophical answer for me in that last bit.

You made my day. Mom

Single rib cast on sounds intriguing! Why have I not heard of this before? And how about a single-rib sewn bind-off? Still trying to figure that one out.