And Now My Knitting Hates Me 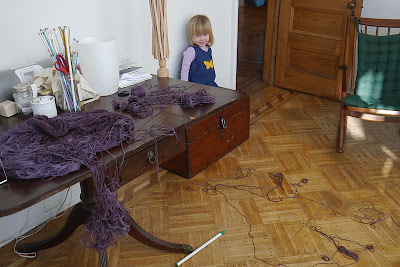 Willow, of course, thought it was hilarious.  I ended up with strands of yarn that were only a few yards long, and crazily tangled to boot. 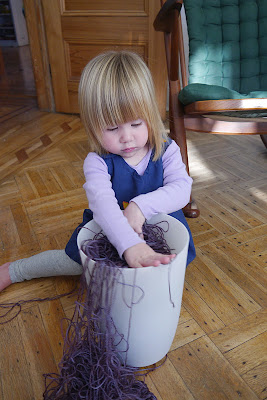 Let me say first that I will absolutely  buy more Sliver Moons Yarns, and that I did of course dutifully check my chest and my other yarns for moths.  Nada.   I was, needless to say, really bummed, and tried to convince myself that there was a useable skein in there somewhere, and that maybe I could just weave in five hundred million ends, because that wouldn't look awful.  But in the end, this is what we did, and rightly so.

Let me say next that I do not like knitting socks.  I don't even like wearing socks.  Until December comes around and my feet are cold and then I really like wearing socks and I even magically like knitting them too.  Plus, inexplicably, all knit my socks have started developing holes in the soles.  (Because I wear them out of the house, with shoes, sometimes?  But isn't that what you're supposed to do with socks?  And frankly, my house is old and therefore riddled with scratchy floorboards and nails that keep pushing themselves out so that's not all that safe either).

So, I thought, hey!  I'll make myself some socks!  I picked out a nice, sturdy yarn (Lorna's Laces Shepherd Sock) and a nice, simple soothing pattern that I'd made before (Herringbone Rib Socks by Kristi Schueler from the Winter 2008 Interweave) and got to work. 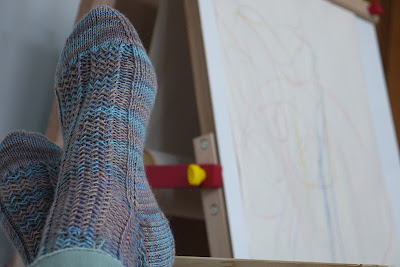 All seemed to be going well.  The first sock flew, was in fact perfect...and then...the second sock.  Let me say first (or is it second?  Third, even?) that I have never suffered from Second Sock Syndrome.   Though certain Yarn Harlots will testify to its existence, I have never experienced it.  I wasn't bored with the sock, I wasn't itching to get going on something else (much) and my life wasn't any more distracting than it had been during the first sock. 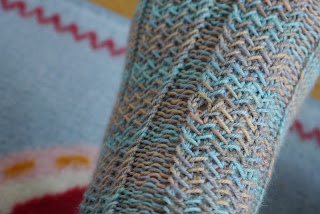 But that second sock, it is a disaster.  See that hole there?  That's only one of many.  My camera refused to even focus on the other ones.  There was one period when I knit round after round fudging with the stitch count hoping that this time it would for the love of God come out right but it never, ever did.  Or not for a good long while, anyway.

And then, just now, the toe started unraveling!  I swear to you, I know how to kitchener stitch.  Give me a stitch and I will kitchener it.  My toes, they do not unravel, especially not mere hours after sewing them!  Someone please tell me what is going on here!