Somebody told me that the year between 1 and 2 was much easier than 2 and 3 and that the Terrible Twos were a misnomer and that once communication is established everything becomes much easier.  And so I've been operating under the breezy assumption that I'm doing great, and I have a total handle on this and hey, communication is just about complete at this point--Willow can tell me what she needs and I can respond and I can tell her stuff and she'll understand and hooray!  Tough part over.  Now all I have to worry about are SATs.

Har de har.  Willow has made enormous leaps and bounds in the last couple of months, and it has been hard on both of us.  She's so excited about her newfound abilities that she couldn't possibly be expected to nap (although lack of nap seriously impairs those abilities).  And I'm tired because she's tired.  But honestly, that's the least of it.  I feel like she's making such giant strides that I don't even know what she can and can't do at this point, or what she does and doesn't understand--I can't keep up.  It's extremely disorienting, and I feel completely out of control.  And hard as that is on me, it's becoming apparent that it's even harder on her.

She loves making decisions.  She gives a little "hmmm" when choosing a book to read, and puts a great deal of thought into it.  She loves being able to go wherever she wants, to decide where we play, what to have for snack, what cereal to have for breakfast.  But being given that kind of control, however important, is clearly dizzying, and while she can't stand to have it taken away when it becomes clear to me that she can't handle it at the moment--the fact is, she can't handle it at the moment.  There are times when she'll freak out into a screaming fit because a square peg doesn't fit into a round hole (a concept she has had a pretty strong grasp on for some time now).  There are very few moments of quiet, peaceful play--she's either running around screaming in delight, or she's exhausted and fussy.  And that can change in a matter of moments. 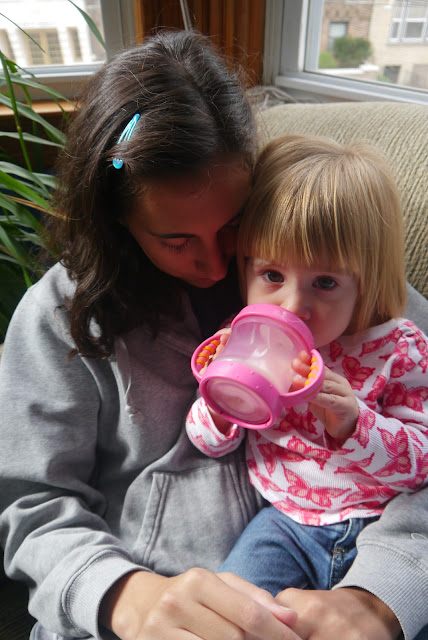 Are all two-year-olds bipolar?

I love all the things she can do now.  I love being able to have conversations, to play pretend, to watch her experience such extreme delight--but this is rough, man.
Posted by Nikki Van De Car

Yes! At least that's the case for my two-days-till-two-years old! Communication is still very rudimentary (but she is bilingual at least by understanding), which adds to the frustration. Moreover, if she is playing quietly, it becomes necessary to drop whatever you're doing and go check - usually that means that she is doing something she really should not be doing. She got smart enough not to attract any attention to that fact. I am looking forward to five! :)

Same here with my 22 month old! He's a bossy old so and so! His current favourite is to ask to be picked up and then points in the direction he wants to go in (usually the cupboard 'up high' that sometimes contains chocolate!), despite the fact that he's been quite competent at walking since he was 9 months old!!!!

You are most definitely not alone! My son can be happy for hours on end, before he completely snaps over something trivial; a square-peg-round-hole problem will send him over the edge, and it's really, really tough to bring him back from that. Some days are easier than others, and some weeks are easier than others...some weeks I think, I did it! I've passed the hardest part! Then he has a meltdown over a cracker falling on the floor, and so it goes.
Have you tried changing the nap routine and/or location? I was driven crazy when J decided that while he loves his toddler bed at night, he will not sleep in it during the day. Now, he naps in his pack-n-play and goes to his "big" bed at night. I had all but given up on the nap, but it makes a huge difference in his behavior and attention span if he rests. Worth a shot, I think...good luck!

Huh...okay, I've tried what I thought were decent changes (and were frankly hard on everybody)--waking her up at a set time in the mornings, pushing the nap back later, instituting a storytime ritual instead of what had been an easy five minute song and down in the crib.

But even when she's tired, if she doesn't want to go down, she'll realize she's starting to relax and she will literally shake herself and sit up and start kicking at things to wake herself up. It's maddening. But I'm all for bigger changes--I might run out and buy a pack and play!