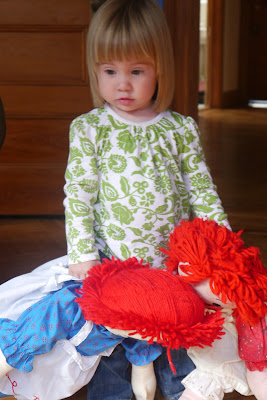 As I mentioned briefly here, my grandmother passed away last year.  She was an artist, though she would never have described herself that way.  She made and collected teddy bears, antique dolls--she made me a Raggedy Ann, an Annie complete with life-sized Sandy, and even a porcelain doll.  But she never got to meet Willow, and for years before Willow was born, she wasn't really up to making anything anymore.

This past weekend, we were reorganizing RockNoodle's room, and during the Great Redecorate, I saw RockNoodle's Raggedy Ann we had bought  her years ago, and I remembered that I had stashed away some my old toys my mom had sent me, and I wondered if there was something in there Willow might want to play with.  I ducked into the closet, and pulled out my old Raggedy.  One of the seams on her foot has split, and some of her hair is pulling away, but she's still quite squeezable.

I handed her to Willow, who squealed and tore off with Raggedy for RockNoodle's room, where she stood and pointed up at RockNoodle's Raggedy Ann.  She held the two of them--both nearly bigger than she is--and spun round and round with them, then held them close so the two Raggedys could give each other a kiss. 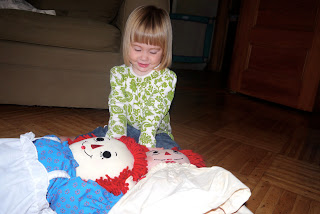 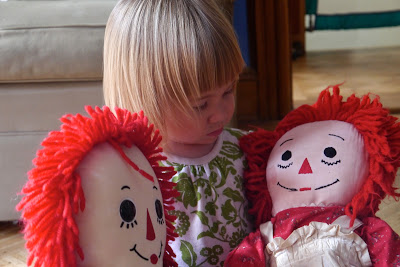 heartwarming story. thanks for sharing

I'm so glad she like the Raggedy Ann. Grandma would be so happy.