So we had to go to Hawaii unexpectedly for sad reasons I don't really want to go into--nothing mysterious; my grandmother passed away, and it was hard, and I'd really rather talk about the fun stuff.

Of which there was plenty.  First of all, there were the plane rides.  Everybody has sat near a crying baby on a long flight, and as we boarded the plane I could see the apprehensive glares of the people sitting around us.  Babies are always cute, except when they're on planes.  Then they're a menace.

But not Willow.  She never cried.  She slept the entire way over, and the entire way back.  We're talking New Jersey to Hawaii.  Dave and I spent the flights planning all these trips we could suddenly take (you know, if we had the money and the time.  It was just that the crying baby obstacle had been removed).  I had heard horror stories of flying with babies who needed to nurse the whole time in order to survive the flight with their sanity intact, and I brought buckets of Lansinoh and told Dave that the hand-gripping that he missed out on in childbirth was coming his way after all.

But no.  She nursed a bit, and then collapsed on the boppy for six hours.  Marvelous child.

She didn't have much trouble with the time change or all the new people and places, either.  She was, in fact, fascinated with such new experiences as wind and sunshine and birdsong.  The few times she's gone outside here at home, she's been burrowed into a giant sleeping bag and unable to see anything. 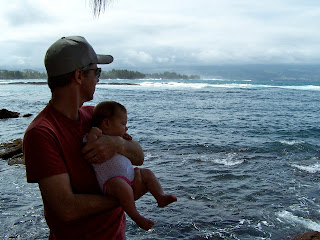 So imagine her amazement at her first trip to the beach.  The smells, the sounds, the warmth on her skin.  And the water around her and the sand between her toes. 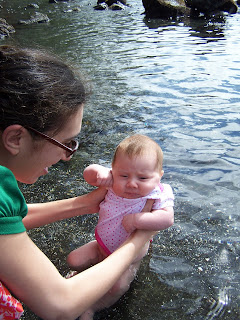 She loved it.  She let out a little shriek and pulled her legs up at first but after that kicked around like it was the most interesting thing in the world.

It was wonderful, despite the circumstances, to get her there with my family.  She made everything a little bit better. 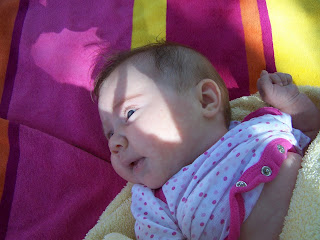 So sorry about the circumstances, but how wonderful to hear she's a good traveler. I want to steal your baby and take her to the beach. That looks like a good time.

you are lucky! its great when they sleep on the flights..we just flew to tasmania from georgia - clocked up nearly 30hrs flying time with 2kids. thank god for stickers.