The Case of the Missing Cheese 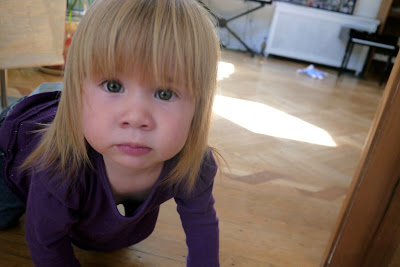 Last night at dinner, we gave Willow a Babybel--you know, one of those tiny wheels of cheese wrapped in red wax.  She was mostly just messing around with it, licking it, taking little bites, etc.--not too interested in eating last night.


And then she dropped it.  I swear, out of the corner of my eye I saw it fall next to my chair.   But when I peered down it wasn't there.  But then I was distracted by Willow deciding to actually eat some food, and when I finally bent down for a closer look under the table, it still wasn't there.

So we figured it was in her booster seat someplace.  Eventually we even picked up her and searched.  Not there.  RockNoodle, becoming slightly concerned about the runaway cheese, crawled around and looked under the table, in the space between Willow's booster seat and her chair, under the cabinet, behind the speakers, under the radiator--we all looked everywhere that anyone could possibly look.  And I just looked again now to make sure.

No cheese.  We didn't hallucinate the eating of the cheese--there was cheese, and then there wasn't.  And while those wheels aren't exactly enormous, they are too big for Willow to have swallowed without any of us noticing.

Where did the cheese go?  I looked in the next room.  I looked in Willow's clothing and diaper.  It vanished.

What would Sherlock Holmes say?  That once you have eliminated the impossibilities, whatever scenario remains, however unlikely, is the truth?  So, what, our cheese has the power to turn invisible?


Update: Aha!  The booster seat has a hollow under the armrest, and somehow the cheese got shoved up under there.  So, instead of invisible cheese, I just have a baby skilled at sleight-of-hand.  I think, on the whole, I prefer vanishing food.
Posted by Nikki Van De Car

That cheese will turn up - probably when it starts to go bad and you HAVE to find it because of the smell.

How does stuff like that happen? Something becoming invisible happens here too. It's infuriating!