Not A Cooking Blog

I've been thinking a lot about food lately.  And doing a lot of cooking, and while I post about it sometimes, I don't post nearly as often as I think about posting.  Because this isn't a cooking blog--but then, it isn't really a knitting blog these days either (though it will be again, I swear to you!)

For people with a toddler, Dave and I do a lot of cooking.  And have done since said toddler was a tiny infant.  For one thing, it's cheaper than going out.  And you don't have to pay for a babysitter.  But because of aforementioned fear of toddler injury, cooking has to occur after Dave gets home, and generally involves a lot of prep during naptime (so take a freaking nap, kiddo).   My day revolves around cooking.  So, temporarily at least, I will embrace this, and bore you with accounts of the food that we eat. 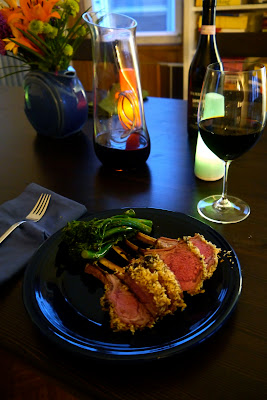 For our anniversary, we jumped off of our cholesterol/alcohol wagons respectively and had Thomas Keller's herb-crusted rack of lamb with honey mustard glaze (right?  That's how to live) and blanched broccolini with garlic and balsamic vinegar.  And a bottle of wine we received as a wedding gift and have been too scared to drink for the past three years.  All that business did not overwhelm the flavor of the lamb, as I was a little scared it would, but instead brightened it--delicious.

The Napless Wonder did not nap, so I rushed about creating the panko/rosemary/anchovy crust and preparing melted onions (which involved creating a sachet out of cheesecloth--I improvised--stupid Thomas Keller and his stuff that needs to be made weeks in advance) only to discover that we had eaten the potatoes that were supposed to go with the melted onions for lunch the previous day (I blame Irene) and so we were one dish short.

Which was fine, since our starch allotment was amply fulfilled by Smitten Kitchen's rice pudding.  We were given some vanilla beans by a friend of Dave's at World Spice Merchants (along with a bunch of other goodies) and after spending years seeing recipes that called for vanilla beans but never quite getting up the nerve?  gumption?  unthriftyness? to go out and get some, I had to search high and low for something I wanted to make that required vanilla beans. 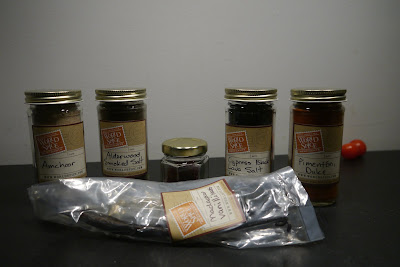 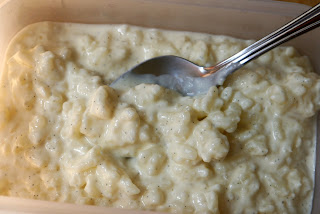 I'm not normally a rice pudding person--but I am a this rice pudding person.  Vanilla beans don't taste like vanilla, at least not the vanilla I know.  They taste warmer, deeper, and have a slight sourness--not to mention the tiny crunch--and make such a simple dessert incredibly fulfilling.  I'm a convert.

Anybody got any good vanilla bean recipes to share?

Email ThisBlogThis!Share to TwitterShare to FacebookShare to Pinterest
Labels: food

I'm not a lamb person but looking at your picture makes me want to eat lamb-lol! I went through the not sleeping phase too. Try to nap whenever you can, throughout the day, when Willow takes naps.

I am a rice pudding person! And this looks amazing. I've made many a rice pudding in my day...but oh! That looks good. Also, I linked you on my blog, yo.