Hawaii, Part One (The Bad Part)

What a cluster___ (thing I don't say anymore because my child seems to suddenly understand everything and I need to watch it.)

To start things off with a bang, we flew separately.  Dave and RockNoodle left early Friday morning, and Toaster, Willow, and I left a little later Friday morning.  Dave and RockNoodle had two stops.  Toaster, Willow, and I had four.  And we missed our third.  (Four stops, people.  With a toddler.  Just kill me).  As Toaster watched our flight from San Francisco to Honolulu pull out of the gate as I struggled behind him with Willow and the stroller (Toaster was loaded down like a pack mule), we heaved a sigh of near-relief.  Okay, so we missed our flight.  But that meant, maybe, that we could be done flying for the day and the airline would put us up in a hotel because it was totally their fault and we could just fly tomorrow, right?

Of course not.  There was a flight leaving in thirty seconds--I do not exaggerate--for Kona, Hawaii, said island being our final destination anyway, and if I could reach my parents to get them to come pick us up on the other side of the island and a day earlier than originally planned on, then obviously that was what we should do.  And that was what we did.  And so when we finally arrived in Kona, having flown for, oh, forever, we all drove two hours back to my parents house (my poor parents, of course, had just made that drive to come get us).

Oh, and I've left out how on Thursday night, before we flew, I came down with a 102 degree fever and what was apparently strep throat, which I promptly gave to Willow after we arrived, and to which she added an ear infection (her first) and so we spent Monday at various branches of Urgent Care in search of antibiotics. 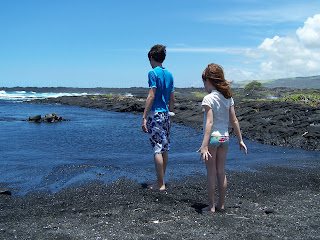 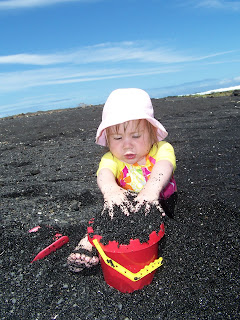 But in between Friday and Monday, we were joined by Dave and RockNoodle (and my bag, which had gone on to Honolulu without me), and we drove down to Punalu'u, a black sand beach, where RockNoodle learned to snorkel and Willow learned that there are joys to be found in sand besides eating it.

There will be much more of that in the next post, which is entirely The Good Part.
Posted by Nikki Van De Car

what an experience! I'm glad you all made it there. Enjoy your vacation and share lots of pics--lol!