These are the kinds of things I always mean to post about, but hardly ever remember--the things that crack me up every single day, but I don't really think about them unless they're right in front of me, because they're so a part of Daily Willow.  And so while I should really spread them out, write a post about each one, I know that I'll never remember, so instead here's a roundup off the top of my head: 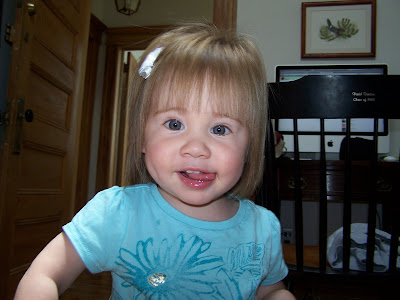 1. Sirens.  I've discussed how Willow is an urban baby (though we are planning on taking her camping soon, wish us luck/sanity), but nothing illustrates that more than her reaction to sirens--we hear lots of sirens, and every one gets a "woowoowoowoo" noise.  And every honking horn gets a "han, han."  It's all day long, woowoowoohanhanwoowoo in our house. 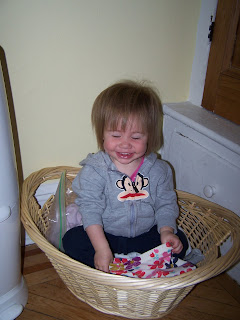 2. Animal noises.  For a while there, cows would "moo."  Now they moo no more.  Cows are silent.  Owls, monkeys, and chickens all have vocal chords, but not cows.  Asking what a cow says gets you nothing but a glare.

3. Mommy as Stereo.  We sing songs for naptime and bedtime, but I have become a veritable jukebox.  It started out with Froggie Went A-Courtin', and that was great, but it got dull, so I changed it up every once in a while.  And now the song choosing can go on for minutes as I start a verse of You Are My Sunshine (emphatic headshake no, every time--hates that song), As I Went Down To The River (generally meh), and so forth until I finally hit on a track that she likes.  And then we sing and sing and sing and this bedtime thing is getting dragged out and I have to work on that I know.

4. Toy Preference.  There is none.  Oh, we keep some favorites in the crib--but who knows if they are favorites?  If they weren't in the crib, they probably would end up forgotten at the bottom of the toy bin like everybody else.  Which isn't to say that toys don't matter--oh, do they ever.  Willow will fixate on some toy or other, and for that hour, that toy is all she wants.  You can try and remove that junky little McDonalds toy that Toaster or RockNoodle got years ago from her grip, but I wouldn't advise it.  Usually she picks something or other to bring to the park with us for the afternoon--one day it was Winnie the Pooh, the next day it was a mitten.  And last week it was a fake Lucky Strike lighter of Toaster's.  Boy did I ever look like mother of the year, letting my 17-month-old carry a lighter around the playground.

5. Affection.  She is all of a sudden the most affectionate child, and this one I actually would never forget, because having Willow crawl into your lap and crush you with the strongest hug she can manage, and slobber all over you with a kiss she can't contain, is the single greatest part of my day, and it happens over and over and over. 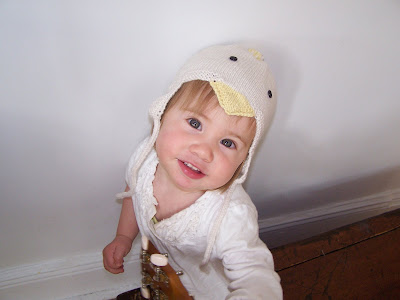 Hi, I love your blog and today want to say thank you for this post. My 2 month old was a complete stinker last night, and this morning not proving to be much better. So today I haven't started in the best of moods, but this post just made me smile and reminded me what it's all about. Thank you :)

Love the pictures - Francie has that turquoise shirt too.