I've read all those same things you have, about how babies can use sign language way earlier than they can speak.  Obviously--I mean, monkeys can sign but they can't talk, right?  Well, I didn't teach my little monkey any sort of fancy signs, but she manages to make herself understood in even the most subtle ways. 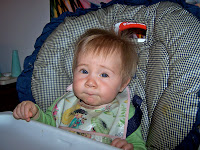 Cheerios were one of Willow's first great loves, but they have begun to fall out of favor (the arrival of the Mum-Mum may perhaps have hastened that, much to my dismay).  Oftentimes, I confess, Dave and I wait until Willow has gone to bed to eat our dinner so that we may enjoy it in peace with some wine and some Rubicon.  But when Toaster and RockNoodle are over, an 8:30 dinner isn't really an option.  And when there's food being consumed, Willow doesn't want to be left out.  So though her dinnertime is long past, we pop her back in the highchair and dump some Cheerios in front of her, replenishing them as necessary while we enjoy our meal.  It worked great.

Until she figured out we weren't eating Cheerios.  And then she wanted what we were eating.  Last night she completely refused the Cheerios in front of her, but instead stared and grunted in the direction of my plate, until I finally gave in and offered her a bite.

Willow, it seems, does not like butternut squash (I could have told her that).  She spat it out and reluctantly went back to her Cheerios.

I laugh whenever I read that you should engage your child in "directed play."  I mean, sure, but who is doing the directing here?  If Willow wants to do something, then by golly that's what we'll do. 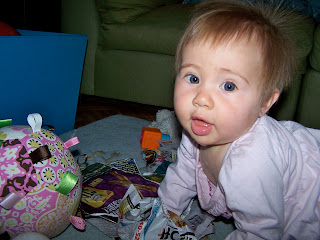 Willow, do you want to try stacking this on top of that?
No.  I want to read a magazine.  (As demonstrated by throwing this at that and grabbing the magazine).

Willow, do you want to practice standing against the couch?
No.  I have no interest in standing.  I have you to carry me.  (As demonstrated by letting go of said couch and falling over backwards into my arms and then refusing to let go.)

Willow, do you want to come out of the swing?
NO.  (As demonstrated by gripping the swing with arms and legs and yelling ferociously).

More than that, though, she's able to let me know what she wants to do.  She lunges for the exersaucer, the book of photos, digs through her toy box for the ball to bounce or the car to push, and picks out the books she wants me to read.

Until recently, when it's been time to leave the park and go home to take a nap, it's a struggle getting her back in the stroller, complete with screaming and arching.  But in the past couple of weeks,  Willow has not only gone willingly, but has occasionally directed the departure.  She'll be swinging happily, until she's not.  And then she'll point at the stroller behind me.  I'll take her out, turn her so she's looking at the stroller, she'll point again, and off we go home to bed.

If, for reasons of my own, I don't want her to go to bed right that second (say somebody's taking a shower outside her bedroom, for instance), she will point the way all the across the house (and it's kind of a maze of a house) to her room and to the nursing chair. 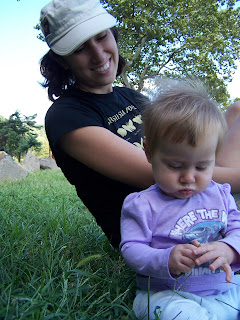 And really, what else is there in life?  We sleep, we eat, we play.  This child may never learn to talk--she's able to say everything she needs to without uttering a single syllable.

CUTENESS! Man, I just love her!

Talking is overrated. We're hoping to raise this next one as a mute, not like he'll get a word in egdewise with Parker around. :)