Now that Willow is of an age where going to playground every day is a necessity,  I've been introduced to yet another scene in which there all these unwritten rules that nobody told me.  So here I am, writing them down.  As far as I understand them, anyway.

1. Staring.
We've all been there.   When your child has a meltdown because they don't want to go in the stroller thank you very much, and yet they have to, and so you force them, which involves a whole lot of screaming and thrashing and general misery and is very very noticeable to everyone within a five mile radius.  And part of me is all "Gah!  They must think I'm the worst mother ever forcing my child to go through this," while the other part is all "Quit staring at me, it's not like your child has never cried."  And really, I think the second one is the correct response.

And yet, there are times when I stare.  Like today, when this eight year old kid screamed at the top of his lungs from under the slide for thirty minutes.  No joke.  Shrieking.  He was still at it when we left.  I couldn't help it--I stared.  What can I say?  It was impressive. 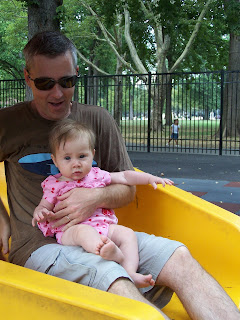 As you go wheeeee! down the slide.  And clap and say Yay!  We went down the slide!  And your child just kind of stares, because the slide?  Not really that fun yet.  But we go down it anyway, even though it's not that fun for either of us, because someday it will be fun, and what's more important is that it takes up some time and I'm not going all the way to the playground for ten minutes in the swing.

And every parent must have ridden the slide with their child at some point, right?  But maybe not every day with a baby who clearly couldn't care less for it.  Which brings us back to the staring. 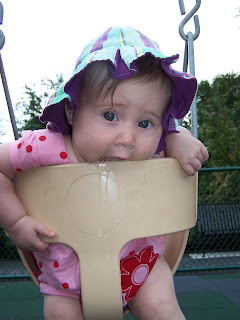 3. Your child counts more than my child.
I feel like since invariably my child is the youngest child at any given playground, we should cede use of the slide/swing/whatever to any other child that wants it.  Like we're not really supposed to be there yet.  Which is ridiculous--just because the sign says that the playground equipment is intended for children 2-5 only, that doesn't mean my ten-month-old doesn't have every right to enjoy herself on a slide.  You know, if she did enjoy herself on slides.

But this is the sense that I have, and I'm sticking with my instincts on this one.  God forbid some three year old comes to shove Willow out of her way; I'll wait until she can, you know, crawl at least before I let her fight it out with the other kids.

4. Hang with the other kids.  I find parents to be much more sociable than nannies.  Nannies seem very happy to talk to other nannies, but not to the parents.  It's not for me--I'm not the chattiest of people (although honestly this one nanny seemed really cool and about my age and none of the parents there were so I thought maybe she would make an exception, but no) but if you've got a kid within three or four months of my kid, I'm going to plop her down over by your kid.  The parent will happily try to interest their kid in my kid (Look!  They're playing!  Or trying to rip each other's ears off.  One of the two) but oftentimes the nanny will give me a cool look and try to distract their charge from interacting with Willow.


It's bizarre.  I really can't explain this one, I'm afraid, but I have found it to be the case.
Posted by Nikki Van De Car

you're pretty. so, they're just jealous. and intimidated. plus, Willow is the cutest baby in the whole world. They'll get over it ;)

There seems to be quite a trend here for seeing lots of Dads in the park with babies (recessionary times and all that), and they are definitely more shy about talking. You'll have to visit Ireland one day, there's quite a baby boom here and a lovely community of mummies to hang around with!