With energy and appetite back, and really nothing to do, I've gone kind of insane on the baking front. Within the last two weeks, I have, with and without the help of household small fry, made sticky toffee pudding, Nilla wafer banana pudding, a souffle, and today is pasta.* Mac & cheese is planned for sunday. (And there was pumpkin bread tucked in there somewhere, but that one wasn't my fault. I just ate most of it).

I have calories to catch up on, you know. Everybody else can just go jogging or something if they have a problem with it.

I think, thus far, the pasta is my favorite. The souffle (Julia Child's recipe--why mess around with lesser substitutes?) was certainly fun, and something I've always wanted to try, and it rose quite nicely and tasted delicious and is something I think the kids will eat which is always a plus.

But the pasta is messy. And mindless, yet exacting. And soothingly repetitive. And extremely time-consuming. Also messy: 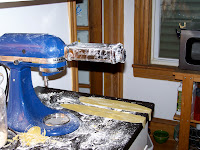 There was flour everywhere. I've made pasta once before, but that was with Toaster and RockNoodle's assistance, and they tend to somehow toss flour about the place while appearing to be standing completely still. But no, in this instance it was not their fault.

It is the nature of pasta-making, I have determined, to be extremely flour-y. Like a flour explosion. 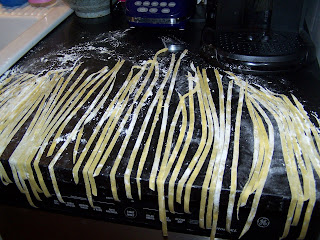 Having learned a lesson from the first pasta-making experiment, I separated the strands of fettuccine and let them dry before bundling them up. Last time we ended up with some pasta dumplings. I'm hoping to avoid that this time around.

I ended up kind of inventing a recipe for the pasta, which is a little fear-inducing; I followed the recipe on the package of semolina flour, because it seemed to make a smaller amount of pasta than other recipes I was looking at (necessary since I had only a limited amount of semolina flour, not to mention I was only looking to feed three people). It called for two eggs, some olive oil, and some water--most other recipes I looked at called for way more eggs and none of this olive oil and water business.

It was way too dry. It crumbled. I decided to add another egg, which with the less flour and the olive oil and water may end up producing some excessively sticky pasta, but it rolled out easily enough. And as I said, I added lots of flour.

Toaster and I are going to go make some sauce now. Although I think I'll have to let him use the computer for a few minutes before that, because I'm on it now as he's getting home from school and he is completely beside himself with this lack of access--what if his friends that he just saw at school updated their facebook pages within the five minutes it took him to walk home???

*Not baking, I know, since it doesn't use the oven, but feels very bakerly anyway.


EDITED TO ADD: Success! Was smooth, lengthy, non-clumped pasta! I'm entirely too pleased with myself about this. Next time, some kind of fancy ravioli.
Posted by Nikki Van De Car

What attachment is that - the pasta making one?

I so heart my mixer. I have the meat grinder attachment.

Teach me to knit a blanket, please. I'm sure this can be accomplished in an hour or so, right?