The nesting urge, it has struck.

We bought diapers yesterday. Wee little things about four inches across with a little notch for the umbilical cord (which Dave tells me will stink of rotting flesh before it falls off. How revolting). We bought socks, we bought pants, we bought a little sleeper sack thing because I'm convinced she's going to freeze to death and we're not allowed to use blankets to cover her. I'd put up pictures of the little socks, but I couldn't possibly capture how very small they are, nor could I really explain how many times I've rearranged her dresser drawers--we're on the fifth incarnation of dresser organization. I think I've got it this time. Probably.

But I will post a picture of a finally-finished sweater: 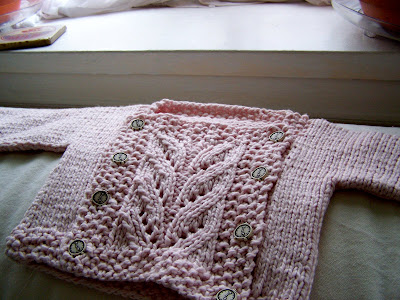 Presto Chango, by Valerie Wallis, in Blue Sky Alpacas Organic Cotton, using the called for US8 needles. A lovely and excessively simple little pattern, and quite quick really, and there was no reason at all it should have taken me two months to knit this tiny little sweater, except for the things that are the bane of my knitterly existence: buttons.

I love buttons. I especially love these buttons: 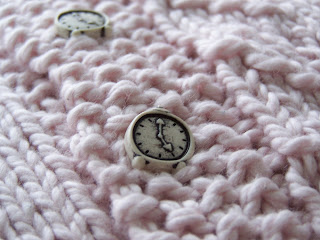 Because seriously, who wouldn't? Unfortunately, I have a little mental block about buying buttons. I hate going up to M&J Trimming and dealing with the what seems to me unduly arduous process of selecting and paying for buttons. For one thing, buttons should not be that expensive. They are utilitarian (and I don't usually buy buttons as cute as these). And for another, there must be an easier way of purchasing buttons than having a store clerk come over and write down the buttons you're buying, and then look at you as if you're insane for buying them (what am I doing wrong? I'm buying buttons at a button store. Why do I feel your disapproval? I don't understand.)

Anyhow, after finishing the sweater, or nearly, I dutifully made the trip to M&J Trimming, and found the perfect buttons, and bought six of them. Notice anything about the sweater? 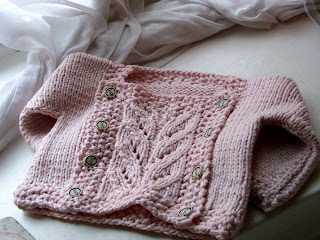 Yeah, it has eight buttons. I'm a dumbass.

Easy enough to go back to M&J Trimming and buy two more of the stupid things, but then of course I got sick, and just couldn't get myself there. And so the sweater languished. For months. Now that I'm better, I did go back, and I did endure the looks of the sales clerk ("You'd like to buy these?" "Why yes. That's why I'm in your store.") And then I didn't sew on the buttons for weeks.

Why? Because I hate sewing on buttons. I loathe it. I hate sewing period, and sewing on buttons is just a needle-scraping-plastic exercise in the tediousness of sewing. It makes my skin crawl. An overreaction? For sure, but there you are. I also am kind of crap at it. No matter how hard I try, the buttons do not line up properly, nor do they end up being sewn where I want them to be (how do they move? What causes this? I do not understand.) And they are always, always crooked. Those little alarm clocks look like they're doing a little tilty dance.

But then the sweater is done, and it's sweet and charming, and those really are some wonderful buttons and they're totally worth all the trouble they cost me. And I think I'll just go put the sweater in a drawer. Perhaps in a drawer all full of baby knitwear? Or maybe I'll reorganize so that it's all by size. But then the knitwear is kind of guesswork, and I don't want to stick something in the 3-month drawer and have it actually fit her right away, and by the time I move on to that drawer it won't fit her anymore...maybe if I reorganize so that the clothes are on the left as opposed to the right, I won't have any trouble remembering. And now that I think about it, we're really going to have to access the spare sheet sets often, aren't we, so those shouldn't be in the bottom drawer, and oh look, what a lovely little blanket Susan sent, and I should just refold all these things, they're not neat enough.
Posted by Nikki Van De Car

That is *so* ridiculously cute. And the buttons! Perfect!

I finished Owls a month or so ago and need to find buttons for their eyes. I haven't seen any I love, and not in the quantity I need, either. (I need 34. I have 17 owls.) So my owls will continue bing blind for a while longer. :)

Lurve the sweater!
As to the baking, remember to make some (or, LOTS) to freeze. People told me this before I gave birth, but then...oops, he was 3 weeks early. So I'd done absolutely none of it. Point is, it is (or was, for me) nearly impossible to cook in the first few weeks. Frozen meals or snacks are a godsend. As is takeout, but that can get kinda pricey.

I really should knit this sweater considering am friends with the designer! Yours turned out adorable! Love the buttons!

Hi! Do you mind if I add you as a friend on Ravelry? I'm only just getting my head around raverly and it feels weird adding people as friends that I don't know!!! I'm only about a month behind you and am starting to symaphise with your discomfort!!! I was doing great all the way through, but I think the little fella is squashing my stomach completely now, 'cos I can't eat anything! How are we supposed to get all our vitamins inside of us when the little bundle of joy doesn't let us??? ;)

Beautiful sweater, so adorable! It is so exciting to be getting everything ready for a New Arrival, isn't it? Congratulations!

Please do be my friend! I'm Cordelia on Ravelry...

Yeah, the small snacks thing just has me eating all the time. A nut here, a yogurt-covered pretzel there, some really healthy and full of vitamins baked goods...

So, I was going to make you a blanket for the baby and then it struck me. You are far better at knitting than I am at crocheting. Not only that you probably made several blankets. I'll think of something.
Love you, Auntie Annie