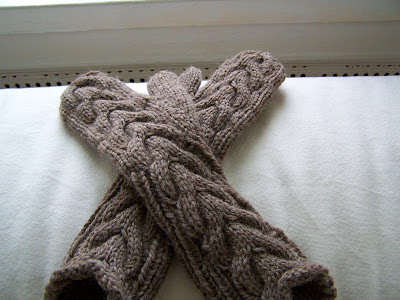 Well, Bella's Mitts are finished, and I'm quite pleased with them.

For me, they're sort of symbolizing what I hope will be--they're RockNoodle's Christmas present, and the hope is (providing Baby Roo arrives by the time she's supposed to) that with that day, and with these mittens made with love and warm fuzzy wool, things will get a little easier for RockNoodle.

For they are emphatically not easy now. The no-sleeping thing continues, and while there were a few nights there where the Claritin really did seem to be helping matters, it's clear that it isn't anymore. The tantrums also continue, and are as mercurial and unpredictable (that is, it's predictable that one will happen, like predicting that you'll get stung by a bee when you wander into a beehive. It's just hard to say exactly where the bees will strike) as could be. Yesterday's tantrum was over such a routine thing as yes, indeed, you do need to do your homework and cannot simply watch TV instead. Perhaps that is, as you say (or rather, scream) not fair, but it is how it has always been and always shall be. Perhaps you'd like to sit down with me and give that math problem a try?

The one person who seems to be the RockNoodle Whisperer is her brother. Dave and I can be loving and patient but calm and firm all we want, and it will be as nothing in the face of Toaster cheerily asking RockNoodle if she would like him to sit with her. Then all is sweetness and giggles, with the tears still drying on her cheeks. Which isn't to say that she's at all easy-going with him either; she goes out of her way to make him crazy. And then he does in fact go crazy. But except in the face of the most severe provocation, he is incredibly patient and generous with her, and it's wonderful to see.

Of course, he has good reason to be patient, as do we all--our theories and fears about the probable cause of Hurricane RockNoodle have been confirmed. RockNoodle told Toaster that once Roo is born, Daddy & Nikki won't love her anymore. And later she told Dave the same thing.

No amount of preemptive explaining that love is not like a cookie, that needs to be divided up, has really sunk in, nor has Dave's emphatic "that could never happen, it's just not physically possible" response had any effect. And I suppose how can it? But it tortures me to think of her living with this fear, with this belief. It's awful. And the craziest thing is that it doesn't seem to have any impact on her feelings about Roo at all. If I thought a new baby was going to mean that my father wasn't going to love me anymore, I would not think much of that baby. I would loathe it. But she doesn't bear a grudge--she's excited and loving and full of anticipation.

It isn't much longer. Soon enough, Roo will be born, and RockNoodle will see that the world did not end, and that the love we feel for her is as infinite as it ever was. Or that's the working theory, anyway. My concern is that if she can believe such crazytalk now (and however common, normal, and natural it may be for her to feel this way, it's crazytalk, of the craziest kind) what's to stop her from turning our unavoidable preoccupation and exhaustion with having a newborn into the very thing she fears? Obviously, I'm going to try not to be too preoccupied and exhausted, but I hear tell babies take some time and energy, no? And if RockNoodle can feel this way when she has our complete attention and all of our time, how will she feel when we have less of it to give? Not less love, of course, but less time, which may translate to less love in her crazytalking mind?

I just feel so bad for her, living like this, and I want to stop it, but of course I can't, so I want some guarantee that it will stop, but of course there isn't one, so I make mittens, and fill them with love, and hope that she will trust it someday.
Posted by Nikki Van De Car

aww, that is so sad...I feel for both of you. When I was having my second baby I worried that my love wouldn't go round, but of course it did and I went on to have 2 more babies. Good luck x

The wonderful thing about newborns is how much they sleep. For the first 3 or 4 weeks of my son's life, it seemed like he slept all the time. Not, of course, in long enough segments to allow one to feel particularly well-rested, but I was assured of at least one long nap each day, if not two. So, yes, you will be tired, but the baby also doesn't need that much attention or stimulation in the beginning, so take advantage of your relative freedom. My husband and I went out to dinner, attended (very tame) parties, and took our baby everywhere we could. I imagine you'll be able to give Roo's siblings plenty of face-time to allow them to adjust to the wee one. Babies are so much fun once they reach about 5 or 6 months - by then, most of the sibling fears will disappear, I hope.

There is a saying that a mother's love can never be divided or subtracted. It can only be multiplied and added to. With each child there is more, not less, love to go around. God's arithmetic, I guess. Way better than Murphy's Law!

You could tell her that her daddy didn't speak to Nama for a few days when she brought Uncle Brian home from the hospital. I bet she'll laugh at that. He seems like he might've eventually gotten over it.