Roo and I hit the halfway mark in our bodily cohabitation on Friday, which coincidentally was my birthday, so that was a nice little gift there. Roo remains, sad to say, nameless. That is, I have a name. Got one all picked out. Pretty damn certain. But despite countless unsubtle promptings, a certain other member of the naming team didn't start doing any of his research until Saturday, and has not finished, and so Roo is the only name Roo's got.

I'm bummed for her sake, but also somewhat sheepish, in that I am entirely aware of the insanity of needing to name the child 20 weeks before she is born, and that perhaps 19 weeks will still be plenty of time for her to have a name--she's made it this far (how on earth do people not name their children until days after they're born? It would drive me bonkers. It does drive me bonkers when other people do it), she'll make it a little while longer. And I will too. 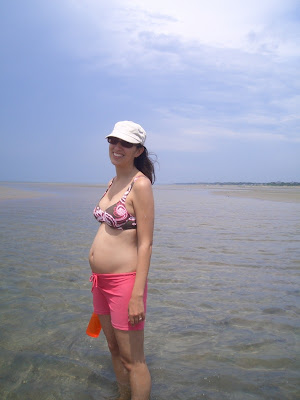 This is actually from a week and a half ago, but is generally accurate still. I'm refusing to buy a maternity bathing suit--have you seen those things? They're ghastly. By what math does pregnancy= ruffles? Also the summer is almost over. I can make it.

My birthday presents from Dave are somewhat hilarious in their representation of my personality--obscure cd by artist doing stuff he doesn't usually do? Check. Expensive knitting book (A Stitch in Time--yay!)? Check. TV shows by Joss Whedon? Check. Book by Michael Ondaatje that I by some strange happenstance don't already own? Check. Cooking gadget designed to make it so cooking food takes all day long? Check.

Covers all the bases.

The only thing I haven't cracked yet is A Stitch in Time--I'm saving that one until I have the kind of body that can wear those clothes again. But I watched the missing Dollhouse episode, listened to the cd, started the book, made Dave watch Dr. Horrible, and MADE PASTA.

Yeah. With the possible exception of the Dollhouse episode (damn that was good), that was the most fun. I wish I had pictures, but when all four people in the house are covered in flour, nobody's running for the camera. Dave laughed at me when I insisted on starting dinner at 3:30, but it was totally the right call, because it takes a very long time indeed, but at the same time it's so much fun and I can't wait to make more next weekend.

I love fresh pasta. There's a dish that I crave just about every week (and I've only had it maybe three times in my life)--it's very well-cooked tagliatelle with a creamy tomato basil sauce. And that's it. Just almost-mushy creamy tomato-y noodles. It's heaven. Does anybody know how to make that sauce? I want that sauce.

We did have some hiccups, this being our dry run and all. We ran out of space to dry the sheets before cutting them into spaghetti, so we did a round of spaghetti and went back to making sheets. Mistake, apparently--the first spaghetti batch clumped alarmingly (still tasty though!). And I think we didn't need to do quite so much folding as we did. But it was hard to resist.
Posted by Nikki Van De Car

One of your very own Aunties(who is on a son's computer) did not name any of her 5 children until after they were born. Oh, she had lists of names, many possible names but all of them were named "Baby" for a while. Tried to get a feel for their personalities which I probably never really did. I think it probably drove your Granny bonkers,too. She was once set on John Kyle then her daughter-in-law changed it to Kyle James. Oh well.