If you want to be surprised, stop reading right now...

Wasn't sure we were ever going to find out, though. That is one uncooperative baby in there. Or, taken the other way, with the polite, unintrusive baby thing I was talking about earlier, that is one likes-to-keep-still-and-keep-its-legs-crossed-thank-you-very-much baby. We ended up having to go twice for the ultrasound--Baby gave us great shots of heart and brain and hands, but nothing of spine and feet. So they sent us away, said come back later when you've had a shot of apple juice.

Baby was certainly more energetic three hours later--but mooned us instead. It really wasn't until the last possible moment, right when Joanne the technician had wrapped up all her shots, and we were resigning ourselves to boring knitwear...okay, maybe Dave wasn't doing that exactly. But he asked Joanne sadly whether this was our very last chance, or whether there was another scan at some point. Joanne said hmm, no, you're having a girl. Baby had suddenly flipped over and given us a nice look. Oh yeah. Clear as day. 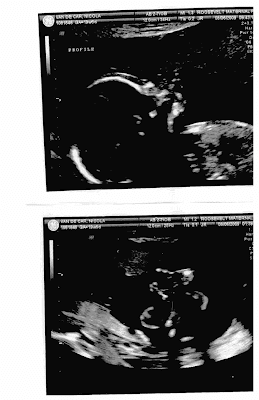 These pictures are not what you'd call clear as day, but....there she is. The bottom one is a floating hand, giving us the thumbs up. The top one looks like she's blowing bubbles.

Generally speaking, looking at the ultrasound looks to me like alien blob, with only a few glimpses of "hey, that's totally a little human in there!" Or maybe more like Gunn on Angel talking about how they were going to find a "cannibalistic humanoid underground dweller" in Darla's uterus, only Wesley* says "No. Human as in a boy." Although given the Connor** that boy turned out to be, maybe a cannibalistic humanoid would have been better.

Except for how it's a girl we're talking about here. I'm a little all over the place.

And now the naming begins. I am an insanely decisive person, so this child will be named by tomorrow sundown at the latest. But it's a lot of pressure. I mean, what if the name Dave and I pick is completely wrong for her personality? I was thinking about Clementine, but as Mary pointed out, Clementine is quite a name to live up to. What if she's shy? What if she's not particularly quirky? What if she likes Death Metal? Clementine would sit wrong on her (and invite the unfortunate nicknames of Clem and Tiny, so scratch that).

Then again, people can rise above the worst names. Look at His Girl Friday--Rosalind Russell's character's name was Hildy, short for Hildegaard, for crying out loud. It doesn't get much worse than that, and she was awesome. So that takes some of the pressure off.

We're going to do right by you, though, Baby Girl. Not to worry.

And yay! So much more fun knitting to be done!

I'm really very pleased. Everybody we talked to was convinced we were having a girl, but Dave and I both thought it was a boy. And honestly, though I thought I would, I didn't care either way--I had these visions of a laughing little running boy, and wanted to scoop him up and hug him. But does that translate to disappointed? No. Oh, no. I can't quite believe I'm having a little girl. Love, love, love her.

*Damn. There goes Wesley as a baby name.

**What is Vincent Kartheiser's deal? Watching Mad Men now, and I swear to God, some of those lines he utters are pulled directly from Angel. And I'm sure he whines "Blah, blah, typecasting, you all just don't want me to be likeable because you hate me."
Posted by Nikki Van De Car

congratulations! we're all very excited for you.

Yay!!! Congratulations! I expect to see oodles of cute little dresses from now on.

Also, how much do I adore you for comparing your unborn child to something from an Angel episode!!! (And ultrasound photos look like blobs to me, too.)

P.S. I thought it was a girl. Baby girls make you feel barfy. Oh, not officially, of course. It's scientifically unproven. But every single preggie I know who's lost her appetite is having a girl.

Have to say, Clementine is a fabulous name!