I don't know how I've managed it (I do sleep, right?) but somehow in the midst of cleaning/painting/showing the house (which is all we've done since coming home. Is depressing), I've knit a lot.

Not entirely successfully, though.

Spina di Pesce is a beautiful sock. My Spinas di Pesce were not. I made it all the way through the heel before I realized that my fudging was not cutting it, and I needed to try again. Here they are now: 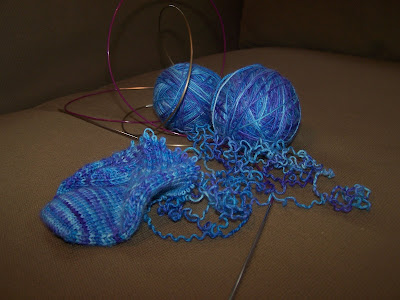 It's tragic. I've frogged before, but not often, and I always have this Hulk-like rage at myself, the pattern, the yarn, my stupidity in not realizing earlier that this was not salvageable, my inability to knit properly, etc.

I think part of the problem is I've knit a whole lot of socks lately, so I wasn't really enjoying these as much as I wanted to, and so was powering through disgustedly from fairly early on. And now we're into Christmas knitting, and....well, usually I make somebody or other socks. I have one pair of socks on the list, but if I don't get over this sock-aversion by Dec. 1, she's getting something else. (It's unlikely that I'll go that long without the sock-love, but we must be prepared for the worst).

Speaking of Christmas knitting, I'm actually quite proud of myself there. Cobblestone is nearly done--wrapping up the yoke now. I think it'll fit Dave perfectly. I did spot one mistake in the yoke where I knit instead of purled, or purled instead of knit--hard to tell. I'm telling myself it's invisible to the untrained eye, which it probably is because I have to look for it, but if it makes me twitchy I'll rip back. Like I do lately, apparently.

Foliage was not meant to be Christmas knitting, it's just taken me so long to finish that it crossed over into Christmas knitting territory. I did not enjoy knitting this hat. My needles are small and pokey, the RockNoodle-dyed yarn is kooky and makes it hard to see the pattern, which in turn made it hard to appreciate the pattern. However, it looks surprisingly cute on her: 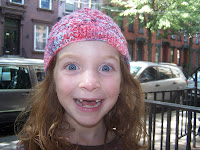 She doesn't normally look so much like a child-vampire, but she lost four teeth in just about as many hours, and is utterly delighted by her toothlessness. 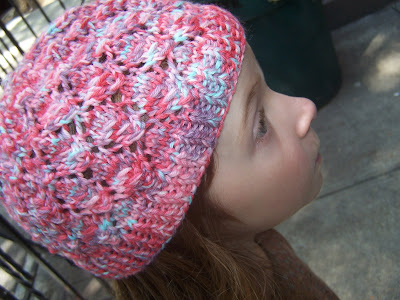 So that's done. Thank God. I seem to have somehow accidentally signed on to make another Foliage, however, and I'm not looking forward to it. I bought longer needles, though. That'll help. 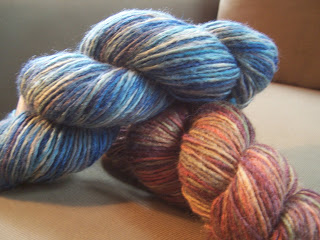 I bought some Punta del Este Lava Space Dyed in support of Jersey City's new yarn shop, The Stockinette (woooo! yarn to be had within walking distance!). It is riddled with acrylic (the yarn, not the shop), but this is Christmas knitting we're talking about, and I've had enough relatives shrink things I made them. The yarn still feels soft and woolly and not like plastic, and the colors are lovely. Dad's getting a Dashing, and I'm halfway through Mom's Fetching: 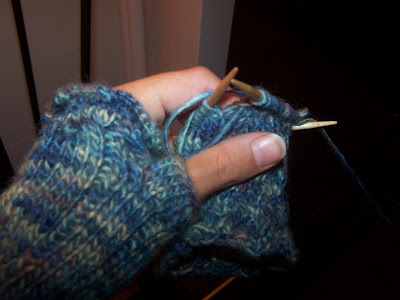 Let's hope this is one of those days she's too busy to read the blog, eh?

Christmas projects in the queue:
--Dashing for Toaster
--Monkey socks for Hannah (caveat: if I can knit socks. If not, one more year where Hannah is knitless)
--Potato chip scarf with extra ruffles for RockNoodle
--Clapotis for Mom
--Some cowl or other for Grandma, another cowl for Puanani. Possibly a cowl for me too.

So! It's mid to late September, and I've made fine progress on some Christmas knitting, and planned out the rest, which is the hard part, right? So I should carry on with some knitting for me, right?

(I'm just as bad when it comes to normal Christmas shopping--I always have to buy myself something too.)

I just find knitting for myself soooo much more fun. And look--it's beautiful! 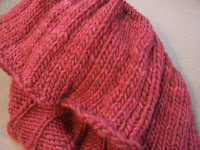 This is the won't-it-look-great-on-me Luna Dress by Katie Himmelberg, in Burgundy Malabrigo. It's got a much squisher feel to it than the original looked in the photo,
but I think that'll give it a woodsy and definitely oh so comfy look.

And after some dithering over what to do with the Punta del Este Mericash, I've decided to knit Molly Ringwald. So far I've managed to wind a ball: 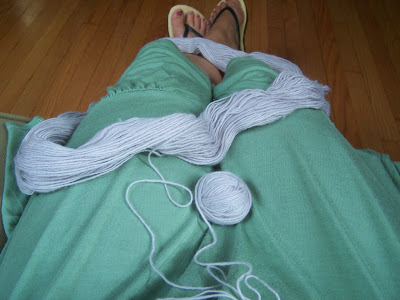 When I'm in yarn shops, I really really have to remember that I don't own a ballwinder and swift. And they do. I should maybe take advantage of this.
Posted by Nikki Van De Car

And I thought I was getting a sweater for Christmas!

You are, dork. Cobblestone IS a sweater. You've seen me knitting it. It's for Christmas.

Fingerless gloves? Or a scarf? I can't tell which. Thanks in advance, though.

I am impressed with your christmas knitting list. I wouldn't be able to handle that!! Love the foliage hat, super cute model.