I didn't do much knitting while on honeymoon--certainly not as much as I expected! Guess the half-finished socks AND two more skeins of sock yarn was a little ambitious, given that I didn't exactly plan on sitting around knitting. But you know. It's not like sock yarn takes up much room.

I did finish the socks: 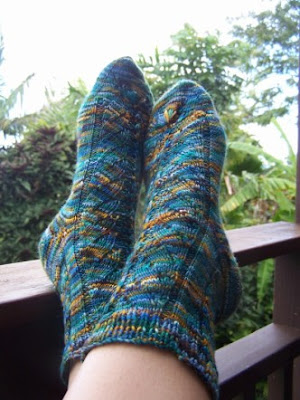 Wellfleet, my own pattern. I haven't decided whether or not to write it up and post it--it's a cute enough pattern, and I'm absurdly delighted by the clam shell on the toe, but it doesn't blow me away or anything. It was designed as a gift--my friend Laurie got married a month ago on Cape Cod, and I wanted to dye and design her some socks. I think I may have tried a little too hard to incorporate all the colors of Cape Cod there, and that hides the shifting sands pattern I was going for, but...if there's demand, I can certainly write it up, but for now--meh.

And I did finish and model the shorts & pajama set (from Wedding Knits, Suss Cousins): 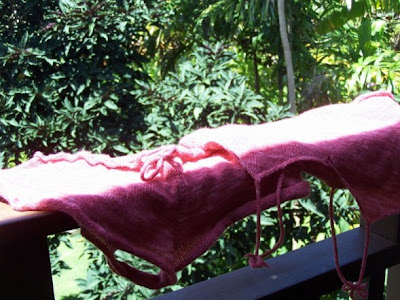 Too shy to model them for the photograph though. They were very popular, put it that way. 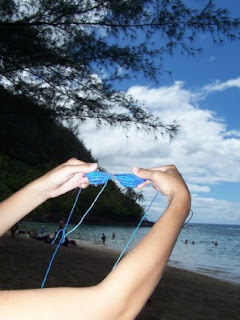 And that was pretty much the extent of my knitting. On the last day, I started Spina di Pesce, and I don't know whether I honeymooned out my knitting mojo, but holy mother, those are some hard socks. For one thing, they are not meant to be knit 2 at a time. And for some reason, I didn't pick up on that until I was cabling off the wire and pulling one sock onto another needle, and generally making my hands cramp with the twisting of the stitches and the frustration of my inability to make this work right.

My tension, as you may imagine, is a little more than usual. Thus they are a little small. This only adds to the frustration.

Arrrrgghh. Spina and I aren't really speaking right now. I did have one supremely awesome find though! In the same little behind-the-Shell-station shopping plaza that Monico's Taqueria lives in, there's a used bookstore called the Tin Can Mailman. And they had this: 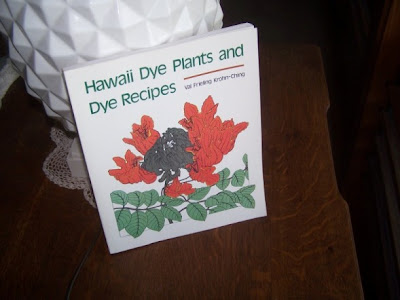 How awesome is that? Luckily, it's not just plants that I could only find in Hawaii--it's avocado, gardenia, and a ton of others. I'm very excited. Similarly, Dave and I were going to bring home a baggie of red dirt to dye some Kauai-colored socks, but we were prevented. The plant-and-dirt police were not impressed with the idea. Probably for the best, as I would in all likelihood do it incredibly wrong and bleed dirt all over everything ever.