My Weekend. It Was Busy.

I have no intention of having a bachelorette party (despite urgings from everyone from my boss to my sister). They're kind of, um, gross in that strippers = blech. (Or so I imagine. Never actually encountered a stripper outside of television. But I assume my response would be something along the lines of "That thong looks...nice? I appreciate your oily pecks? What reaction are you going for here, sir?") And the idea of a last blast with friends is silly. I will go out with my friends as often as I ever did (i.e. hardly ever. But still).

However. I have finally attended a bachelorette party. My dear friend Nicole is getting married, but it's in California, and I'm--how shall I put this? Poor? And so can't attend. But I could muscle up for a bachelorette party. (I confess, I was actually busy until it was confirmed that their would be No. Strippers. I am a bad friend. If Nicole reads this, she will never speak to me again.)

The bachelorette gifts were a pair of panties, and Nicole was supposed to identify who the giver was. Impossible task. Being the token knitter, I made it a little easier for her: 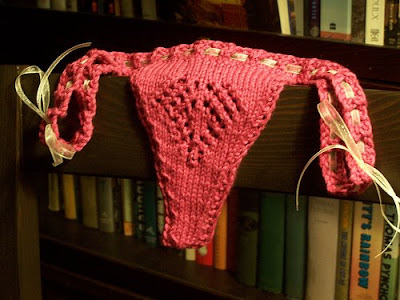 Yarn is Knitpicks Shine Sport in Orchid, and the pattern is Lacy Thong.

It was quite a hit. And got passed around a lot. Hey, she'll never wear the thing. I certainly wouldn't. But it's funny.

As was the bachelorette party. We bopped around, drank champagne, teased Nicole, and stayed out until the hours were both wee and small. I'm still not having one, but I no longer shy away from them.

Dave injured himself. He picked up RockNoodle, and his back died an agonizing death. I woke up, all cheery and impressed with myself for being cheery given the copious alcohol and staying out late, and found an broken and unhappy Dave struggling up the stairs.

Needless to say, we spent most of Saturday stretching Dave and feeding him Advil (bonus! No Alzheimer's for him!) and I watched him worriedly while setting Serenity's heels.

I also spent most of my time arguing with him. You see, we had tickets to see my favorite band. (British Sea Power! They rule! People should listen to them!) Dave loves them almost as much as I do. We were very much looking forward to this show.

However, it's a rock show. People bump into people, and there's standing and occasionally vigorous head-nodding (but not dancing. This is New York City, after all) and none of this is good for people with broken backs. And while they are my favorite band, this also means that we've seen them lots of times, and indeed, we have tickets for their next show in a week. Missing Saturday's show would not have been the end of the world.

But Dave. He is stubborn. He insisted. Partly I think because he didn't want me to miss the show since I was insisting on staying home and looking after him (he had on more than one occasion fallen down without the ability to get up. Really). So we went, and Dave had a grand old time. I did not. I was grouchy with people who were spending more time blocking my view and fiddling with taking pictures with their iPhones than paying attention (and, in one case, showering ever. Stinky man), I was worried about Dave who kept periodically almost falling down, and then I was grouchy with him for insisting on going even though he had a great time and seemed to be fine with the pain it caused.

His back better be repaired by next week's show, is all I gotta say. Or I'm making him stay home and I'm going by myself.

We had other tickets. And these, I wasn't willing to give up. Dave could be hobbling, and I'd borrow the kids' Radio Flyer red wagon and wheel him into midtown.

A little backstory: I can be a bit obsessive. (This comes as a surprise to no one). In college, I lived in London for a few months, and during that time, I saw Twelfth Night at the Globe Theater a total of five times. It was that year's Enchanted. And while I loved everything about the production, I went back so many times for one reason alone: Mark Rylance.

He was the Artistic Director for the Globe Theater for ten years, and among many other roles, played Olivia in such a way that I still cry with laughter just thinking about it. And years later, friends still send me text messages whenever anything to do with him pops up. Like an article in The New Yorker. An article that mentioned, briefly, that he's in Broadway's Boeing Boeing.

Now, I never saw the stupid-sounding Tony Curtis film (Tagline: "The Big Comedy of Nineteen-Sexty-Sex!"), and frankly, I miss Olivia. I have seen just about everything Mark Rylance has ever done that I have had access to, and while I loved him in everything, nothing came close. And I am also, as aforementioned, poor.

But Dave looked up the play, and pointed out a tiny, insignificant little detail that The New Yorker had failed to mention--Bradley Whitford. Bradley Whitford was in it too.

I have great affection for him as well.

So we got tickets. And were very proud of ourselves when the Times ran its rave.

On Sunday afternoon, Dave was still a-hobbling. Standing and sitting to let folks in and out of our row was, um, interesting.

But once the play started, he forgot all about his pain (except for one time when he laughed so hard his back seized). I can't explain why it's funny. It's really stupid. A sleazy American dangles three Air Hostesses, and his provincial friend watches in awe. Definitely sexist, and even kind of lame. I asked Dave what his favorite part was, and he had no earthly idea. There aren't "parts" to this play--it's just bouncy and silly and deeply, giggle every time you think about it funny.

I confess, I like Bradley Whitford better as Josh on The West Wing. His assholeishness is more appealing there--and funnier. But his character warmed up as his life went awry, and the neuroses and panic were priceless.

But Mark Rylance. Oy. People applauded when Christine Baranski (also wonderful) came out, but Mark Rylance's appearance had only me clapping. Has no one heard of him?!?

Well, they have now. 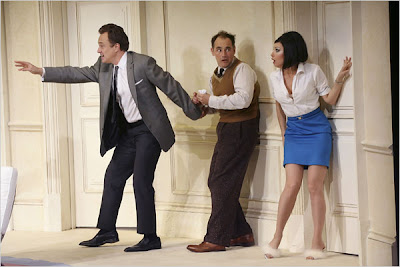 That look there, of slightly whimpering fear? The flopping, the rolling about, the gentle moans of distress, and the wide-eyed can't-believe-my-luck at all these women?

I wanna go again. Maybe a few more times. I bet it just keeps getting funnier.

Mark Rylance is a combination of Stan Laurel and Buster Keaton, with maybe a touch of Harpo Marx thrown in for an extra kick.