Everything I do lately can be traced back to going to Kauai. All the shoes/clothes I look at online (but don't actually buy, since I have no money) are for the trip. Everything I knit is for the trip. I'm planning rather gross things like when in the summer I should stop shaving so I can let my leg hair grow long enough to have it waxed.

So I took $15 and went to Citarella and bought 3/4 lb of Ahi (mercury-poisoning be damned) a red onion, some scallions, and a head of broccoli.

I cubed the Ahi, mixed it with the onions and some soy sauce, sugar, sesame oil, and red pepper and left it to sit on the counter. We chopped up the broccoli, drowned it in olive oil and salt, and broiled it. Dave mixed some poi powder into something sort of vaguely resembling poi (sigh. It's as close as I can get without paying for a plane ticket) and we poured some Albarino and sat down in front of the television and ate delicious food and watched The West Wing. And then I fell asleep.

Now, this may sound like the least romantic anniversary ever, but I think there's something to be said for just doing what you feel like doing. I'd had a stressful day of cutting and pasting (my office is planning a party for 400 people. Of which I'm the spearhead. Mind-numbing and stressful at the same time.) Dave is allergic to being alive when there's pollen in the world. We weren't really up for anything celebratory that required energy.

Is it unromantic of me to sort of hope, though, that when we're eating this exact same food (albeit with real live poi, made from taro grown in Hanalei Valley) in Kauai, that we'll still be watching TV? You know, after a long day of snorkeling/hiking/driving about/baking in the sun? 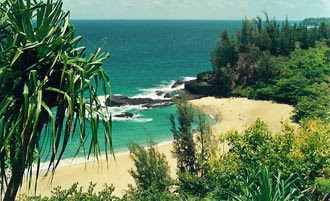 That right there is Lumahai, the very best beach in the entire world. That curvy lagoon is filled with sparkly schools fish, and you can dive off that rock outcropping into water as deep and clear as an Olympic Pool, but salty and clean and untouched.

What do you bet, before we reach August, I'll be knitting something called "Lumahai?"
Posted by Nikki Van De Car