I've had a migraine since Friday that is only now starting to fade. I spent Saturday at first a wedding shower, and then a musical (Hairspray. Gah. Both events were inescapable). I don't think either the bride-to-be or my future in-laws, who bought us the tickets, had any idea that anything was wrong, but in so doing, I used up any ability I had to keep my chin up and suffer through with dignity.

You see, I was raised by my mother, a woman who works hard, loves hard, worries hard, and never lets a little thing like crippling pain stand in her way. (Of course, my sister and father and I could tell when she had a migraine, as she was way less fun than usual, and tended to kind of look through you when you were talking).

I normally attempt to emulate her, and do a good job--this is something that I have, and it's not going away (meds, accupuncture, eliminating red wine be damned for uselessness) and I'm not going to let it affect my life any more than it has to.

Unfortunately, the combination of musical and migraine pretty much destroyed my will to live at all, and so I spent Sunday and Monday either collapsed on the couch in front of Sports Night (Aaron Sorkin's quick dialogue forces me to concentrate on something other than pain) or knitting something mildly complicated.

So I decided to try Perdita. It was small, every row was different, and it involved something I'd never tried--beading. 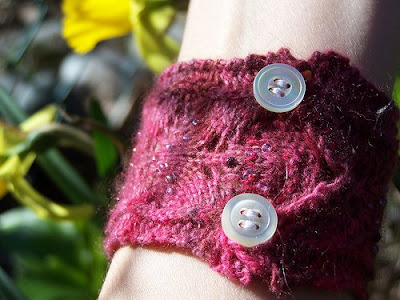 I've knit patterns upon patterns that called for beading, but I've skipped the beads every time.

Part of the problem is that I'm too lazy to really research where on earth y'all are finding crochet hooks that are small enough to slip through a bead that isn't the size of my pinkie, and the other part of the problem is that stringing several hundred beads onto a ball of yarn sounded like something bound to induce a migraine, not alleviate one.

But fifty beads--that I could probably handle. I rummaged through my stash and grabbed the prettiest remnant I could find (Jade Sapphire Silk-Cashmere), borrowed RockNoodle's jewelry-making kit, and threaded the beads onto the yarn via a sewing needle and thread.*

The problem was, despite the fact that all the beads were the same size, they didn't all fit on my needle. Some did, but some didn't, and so searching through RockNoodle's not-terribly-organized beads for a) beads that were the right size and color and b) beads that not only appeared to be all those things but actually were all those things when put to the test could potentially have been an exercise in extreme frustration.

Not to mention, occasionally stabbing my fingers with the needle provided a kind of relief--much like when I was a kid and complained that my arms/feet/whatever hurt, and my Dad offered to help out by cutting off a finger to distract me.

In any case, there's nothing so relieving as producing something, something beautiful and utterly frivolous. 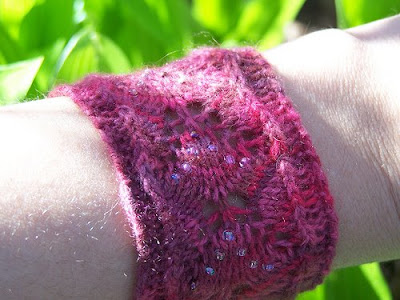 *I'm sure this is the wrong way to do it--but it's what Kim Hargreaves told me to do. I listen to Kim Hargreaves.
Posted by Nikki Van De Car

The pain thing (stabbing is good) is the dual-gate theory. And it works. Wesleyan psych 101 was good for something other than convincing me not to take more psych classes.