There are some perks to the publishing industry besides free books.

Dave's client Jason Sheehan, of Denver's Westword, heaved a sigh, sucked it up for his readers' sake, and finally dined at Le Bernardin. And Dave and I dragged our obliging selves to keep him company for a best meal of our lives (not just our lives to date, mind. Our lives. And we've got a ways to go still).

Our reservations were for 8:15, prime eating time for cool New Yorkers, but requiring of caffeine for dorks like us. So we holed ourselves up in an underground Starbucks (hey, it's midtown. You find a cool place to have coffee in midtown). Dave, in what I considered a worrisome way to start the evening, dithered for a full five minutes at the counter--how many shots of espresso? How tall? How much foam? The barista and I laughed at him until I finally staged a one-woman intervention and ordered for him.

Armed with our caffeine, we played cards. War, to be precise, as Dave is still trying to win back his manhood. Out from the bottom of his bag, Dave pulled an ancient and spectacularly tacky deck of cards. It was Injun-themed. Sachems and Squaws ruled but my favorites were the jacks. One of them had a Mohawk. He was Magua (not really a Mohawk. Underneath, he is Huron. Grey Hair was the father of all that.) His brothers Agua, Ragua, and the lesser son Bagua were supposed to lead me to victory--but it turns out that Sachems and Squaws--not to mention Aces--outrank even the most bloodthirsty and brave of warriors.

The Huron lost. The Mohicans live another day.

This sort of thing is entertaining when you've had evening caffeine for the first time in months and are supremely excited about the meal to come. 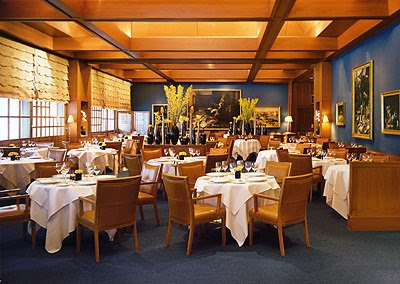 And what a fabulous, nine-course, four-hour meal that it was. Jason (probably wisely) stuck to Bourbon, but I drank whatever anybody told me to. Champagne? Yes please! Sake? Sure!

When Eric Ripert offered to make us a meal of his choosing, we, not being stupid, said ohyespleasethankyou. And I knew I wanted wine, but what on earth do you order when you don't know what you're eating? I confessed my dilemma to the very charming sommelier (whose name upon Googling turns out to be Aldo Sohm, aka the Best Sommelier in America but we didn't know that at the time because we are in fact stupid) who offered to pair the wines for us, if he could be so bold.

And then I got up to go to the bathroom, and waiters laden with trays stepped aside for me, and I skipped my way down the long hallway to the bathroom (sans embarrassing attendant, I might add) and returned to a man waiting by my chair to pull it out for me again and gently place a fresh napkin. Everybody's so nice there...gee...I must state that such treatment normally makes me uncomfortable, but in this instance everyone seemed so genuinely delighted to assist, as though it would make them happy to make me happy, that I felt at home in the palace of Le Bernardin.

I'm going to let Jason, the professional, talk about the food, because frankly nine courses with nine wine pairings makes for Nikki not being able to remember much besides mmmm.... yummy....

We spent much of our four hours musing about Le Sommelier--where precisely was he from, which decade was he from--Dave was convinced that he was Swiss, while I thought he was a member of La Resistance. He's awesome. I want to keep him in that pseudo-closet off my kitchen, behind the TV trays and under the precarious stack of very heavy cookbooks.

"Ah, you are having Trader Joe's frozen pesto gnocchi this evening, allow me to take a slight risk, as it will be the second time you are enjoying this dish this week, and suggest the [mysterious wine that we've never heard of] for the following reasons that I know you can't really follow but you love to hear me describe."

And I also must confess that Jason, having access to the internet, has seen the photos of Dave in the Charlotte scarf, and no longer respects Dave not even in the slightest.

For the record, after seeing the photos of David wearing the scarf, I have MORE respect for him. Any fella willing to model his gal's creation is A-OK in my book.

Well, not my book. I don't have a book. Book writers are twerps.