For this, my second year at Rhinebeck, I drove up by myself again, listening to Arcadia on disc.  I spoke to very few people, but admired many things.  I know this isn't quite how most knitters experience Rhinebeck, but for me, it's a wonderful, cleansing experience, and I feel so much better.

I did buy a lot.  That seems to be pretty common.  And I wore my most favoritest newest knits, which also seems to be the thing to do.  (I wore my Milkweed, some mitts I haven't shown y'all yet, and my Rikke.)

I visited the sheep, because I love them, and this one is my favorite.  I took a video of him, I loved him so.

I went in with Purchases in Mind with Shops to Buy Them From, so I moved through pretty fast.  Next year, I'll try to carve out time for some workshops.  And so, the goods: 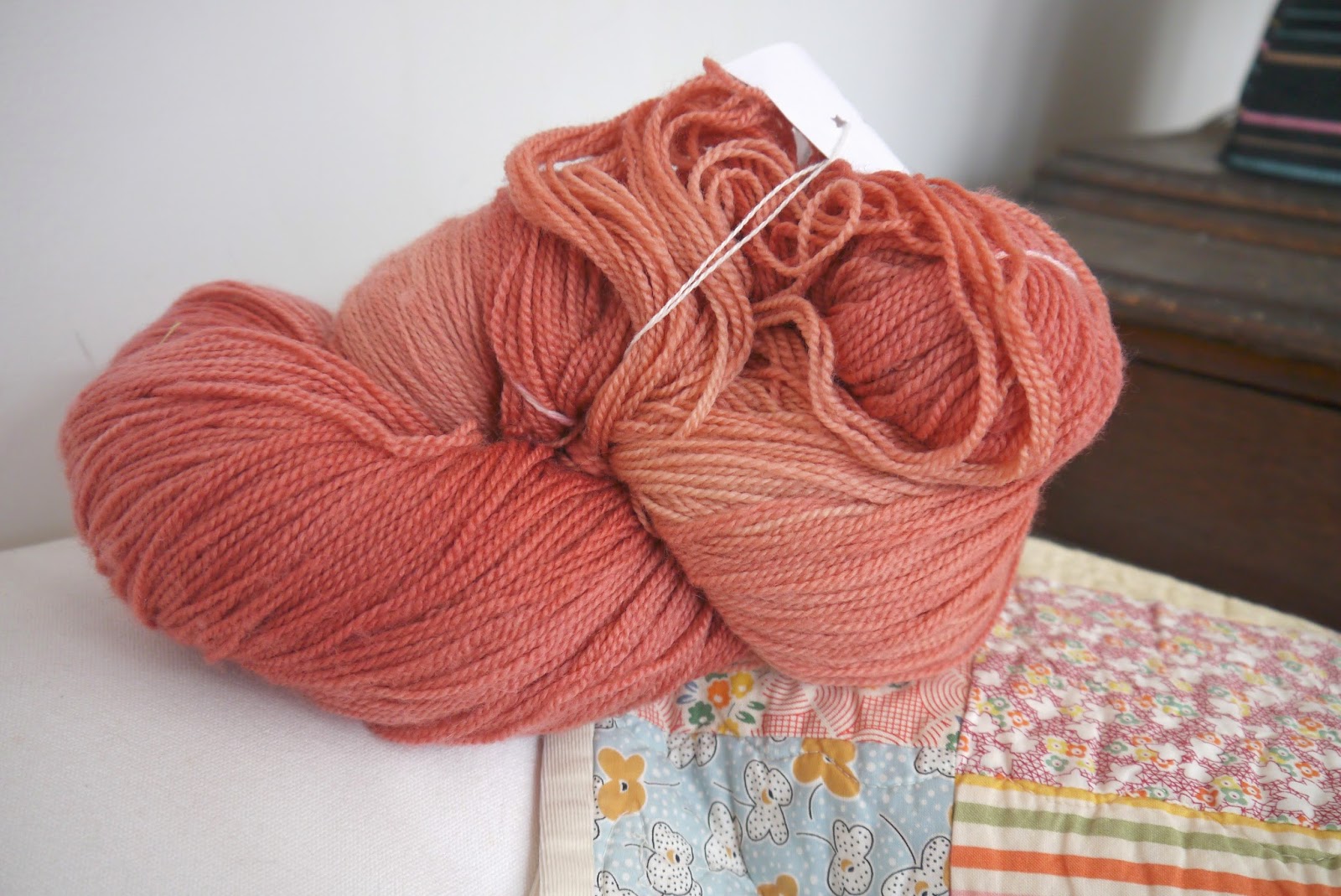 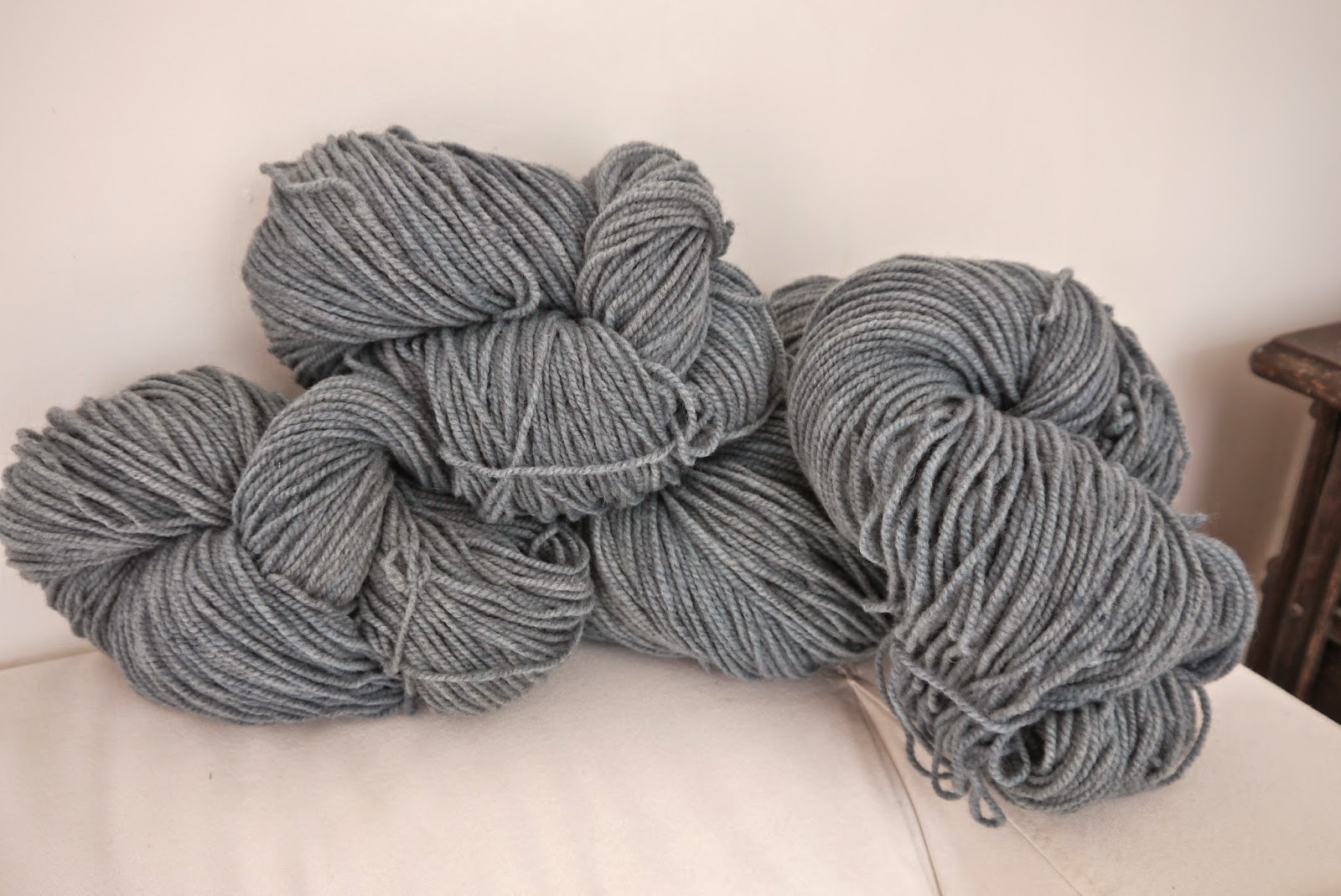 This for Dave.  It's Seacolors Yarns light worsted, in their signature color.  I spotted it last year, and it called to me again. 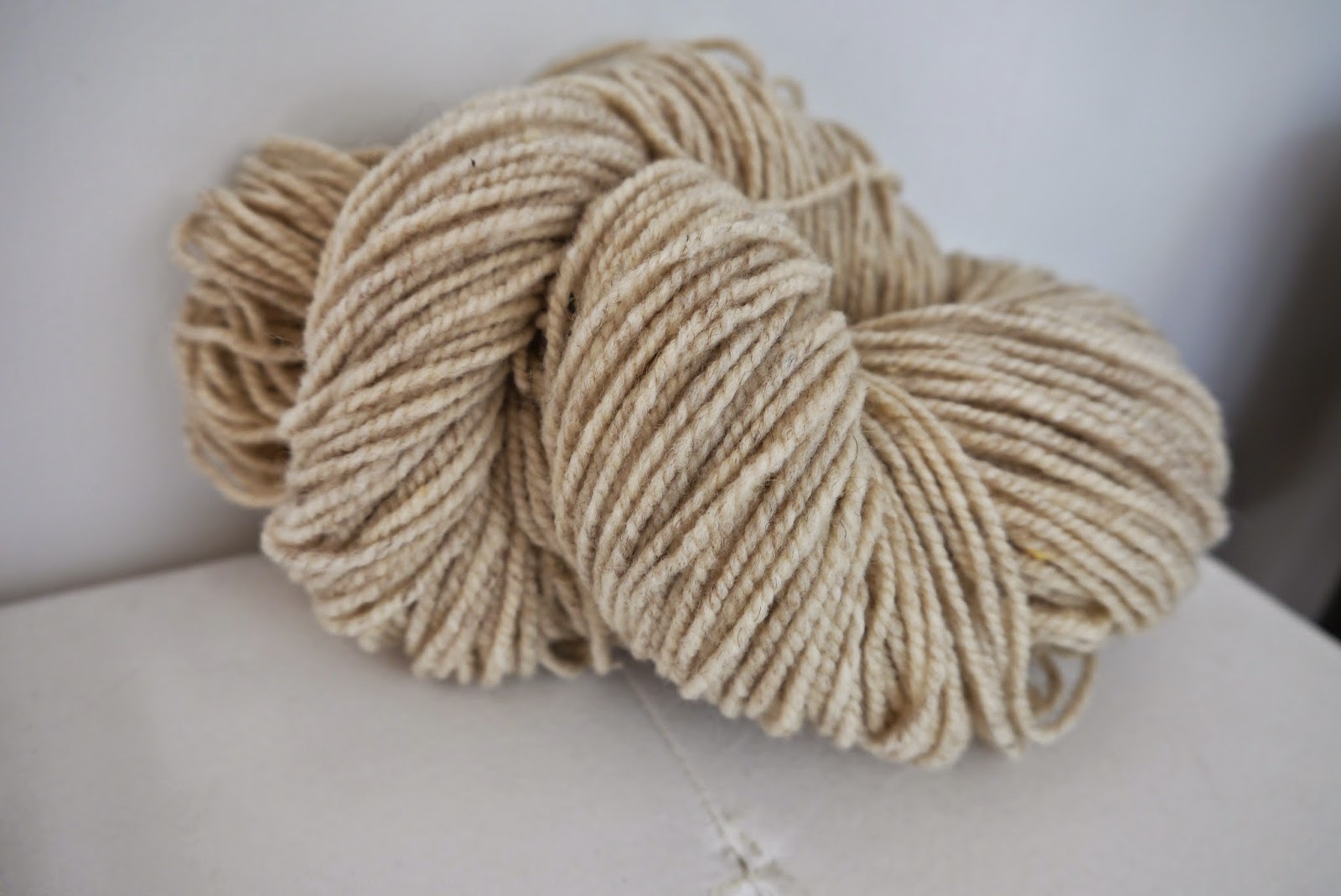 And then I got one undyed.  See, this yarn is fancypants because it's machine washable without being superwash.  And Willow and I can dye it together, and maybe it'll turn into a Bulle or something! 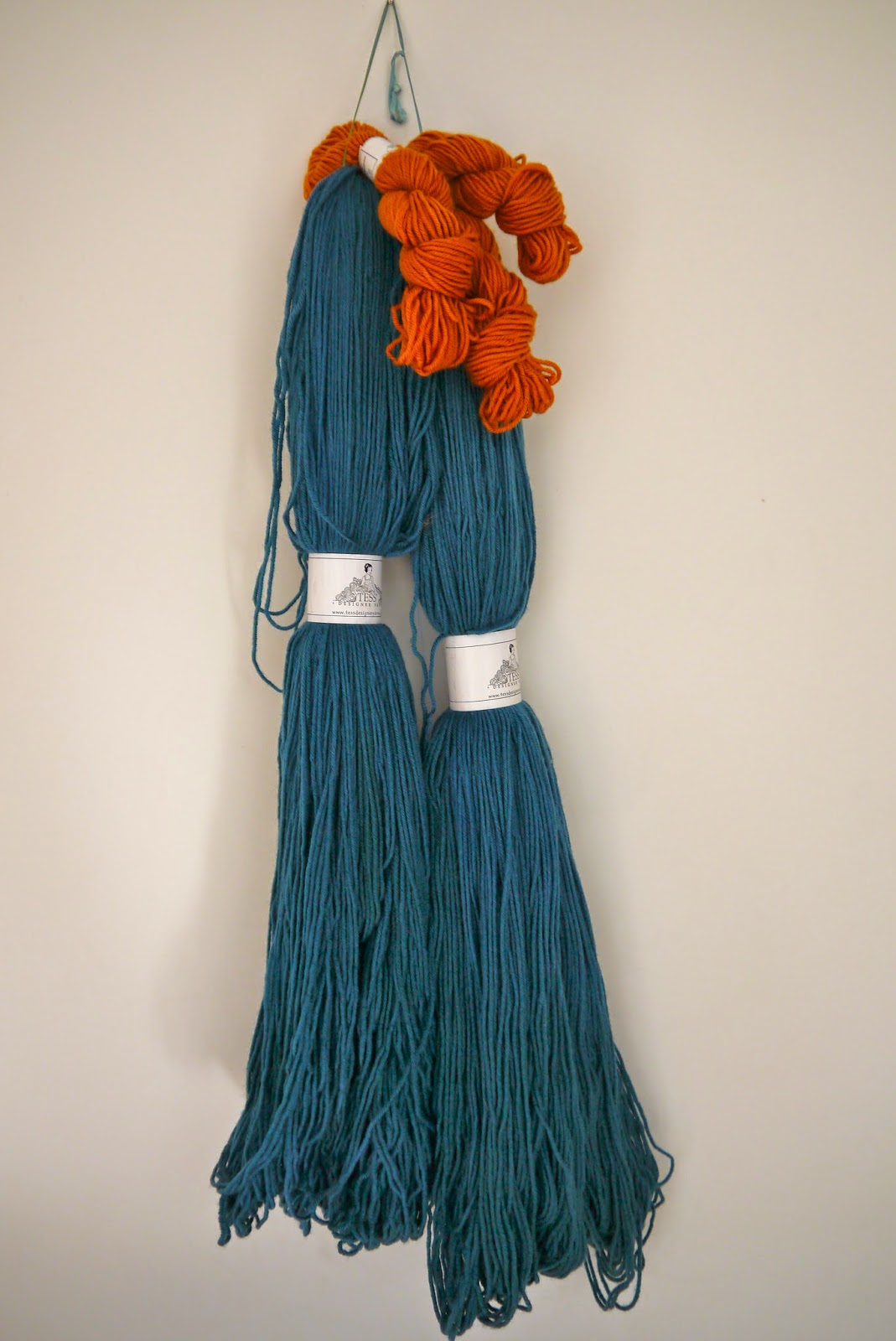 These are for me.  Tess Superwash Merino Worsted.  It's going to be a something with a big cowl neck with buttons on the side (I got some perfect ones from Melissa Jean) and a little bit of orange striping in the body. 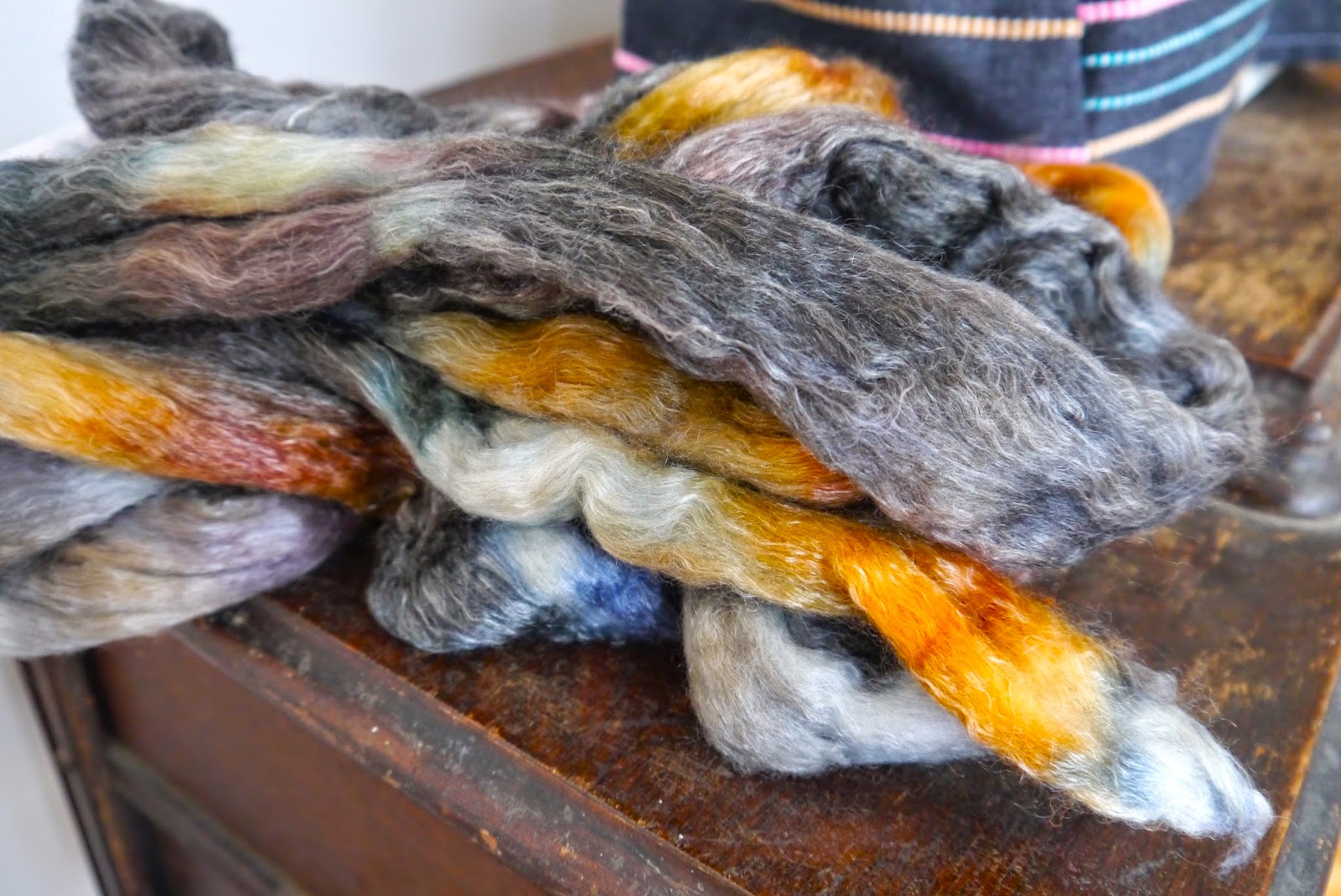 And then I bought this fiber, because honestly.  It's a merino/tencel in Winter, from the Sheep Shed. 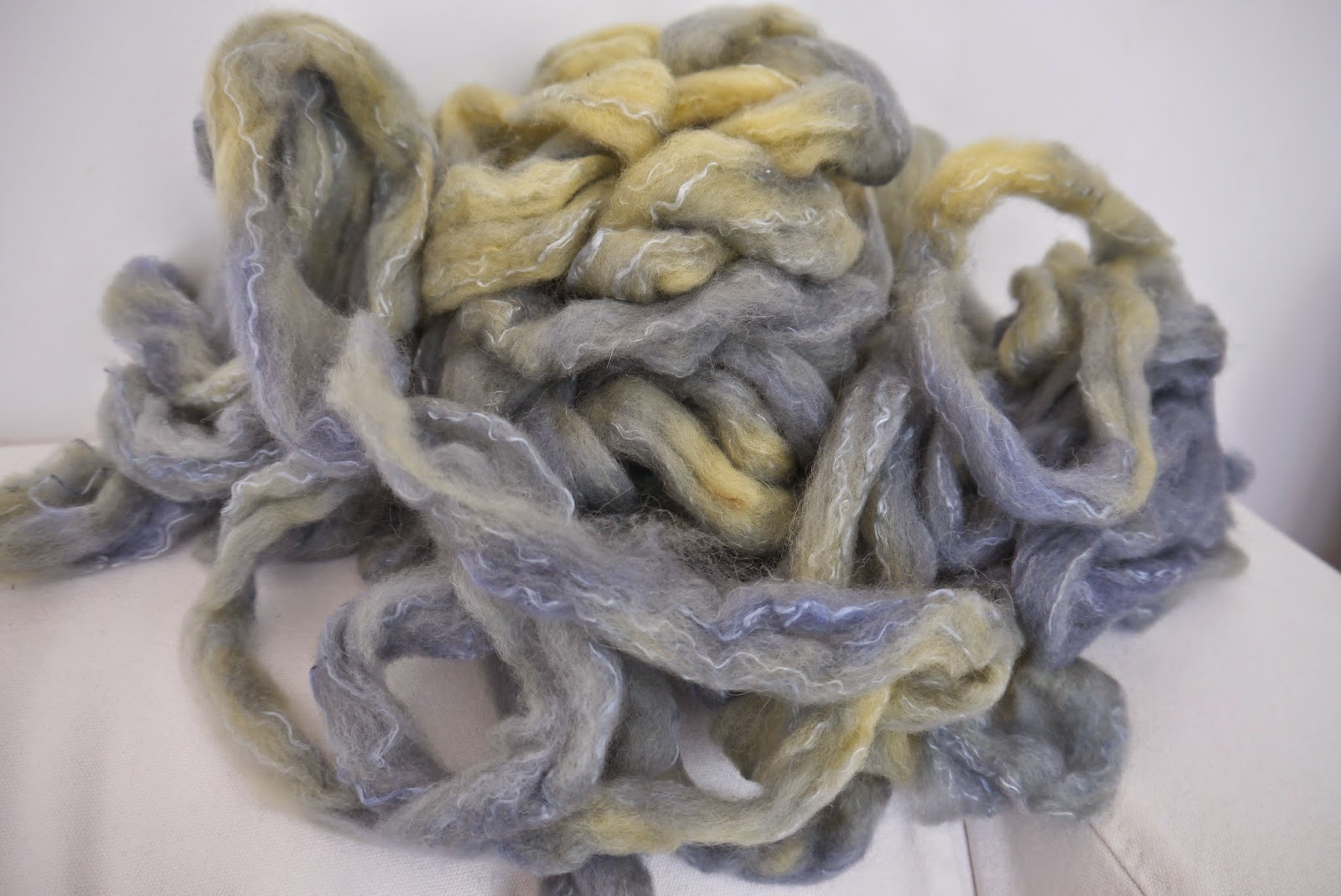 And also this fiber, because it glowed and whispered sweet and mysterious things.  Foxfire Cormo Silk Handspinner's Silver. 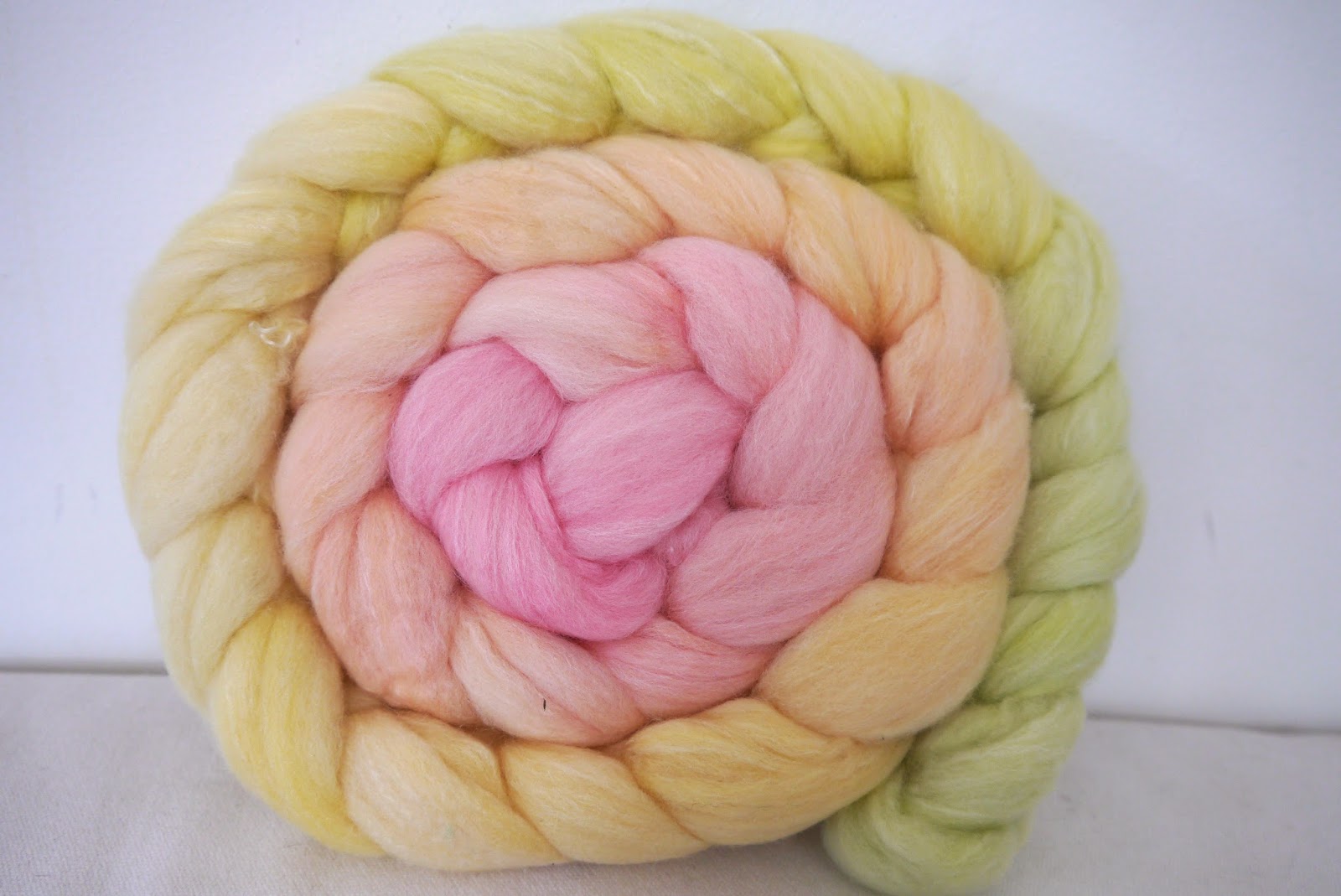 And this because I really, really want to make some kind of gradient into something strong and angular, like Low Tide or Herbivore or Viajante or... 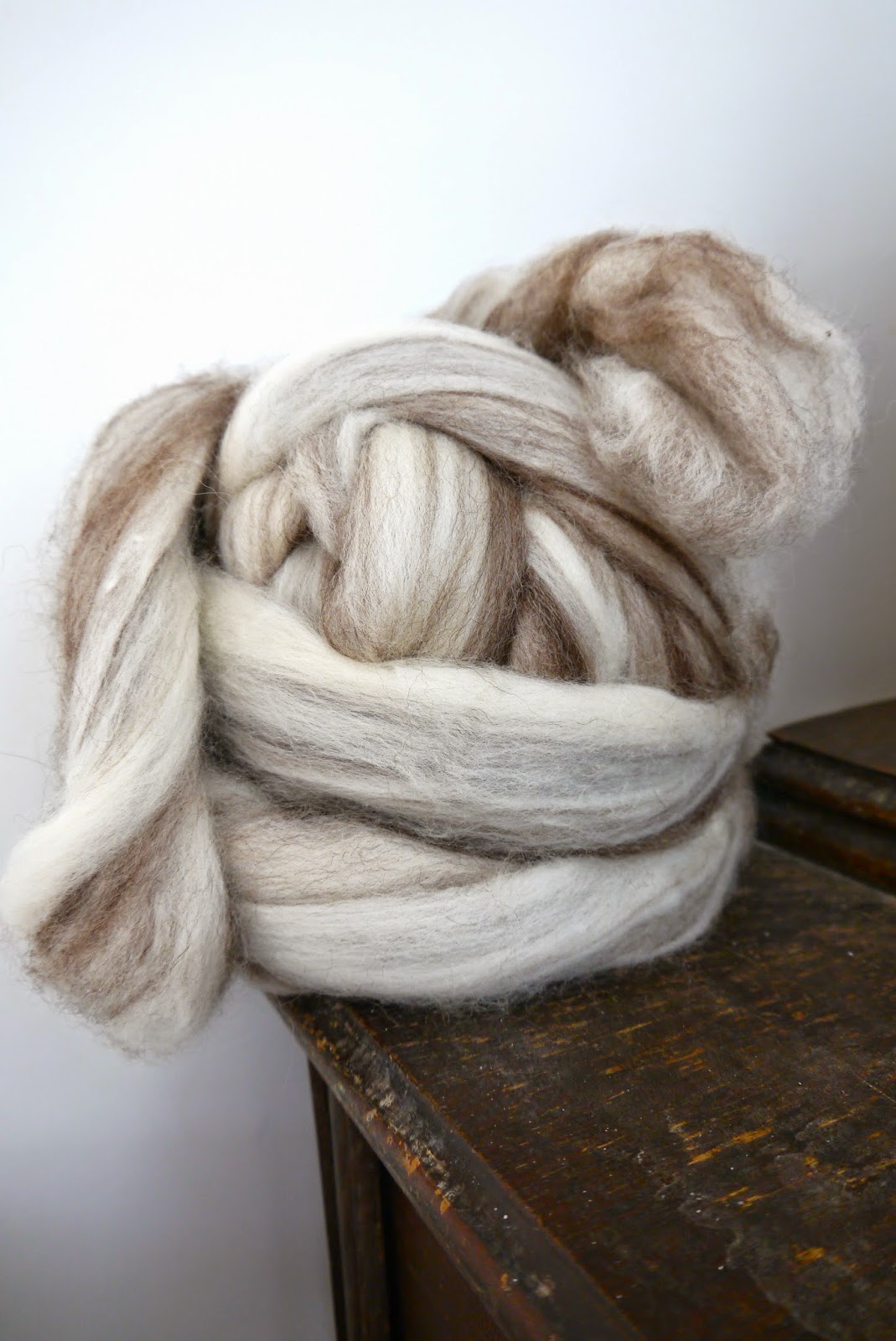 And this Falkland Wool Top because obviously I'll need the practice since I'll be doing lots of fancy spinning. 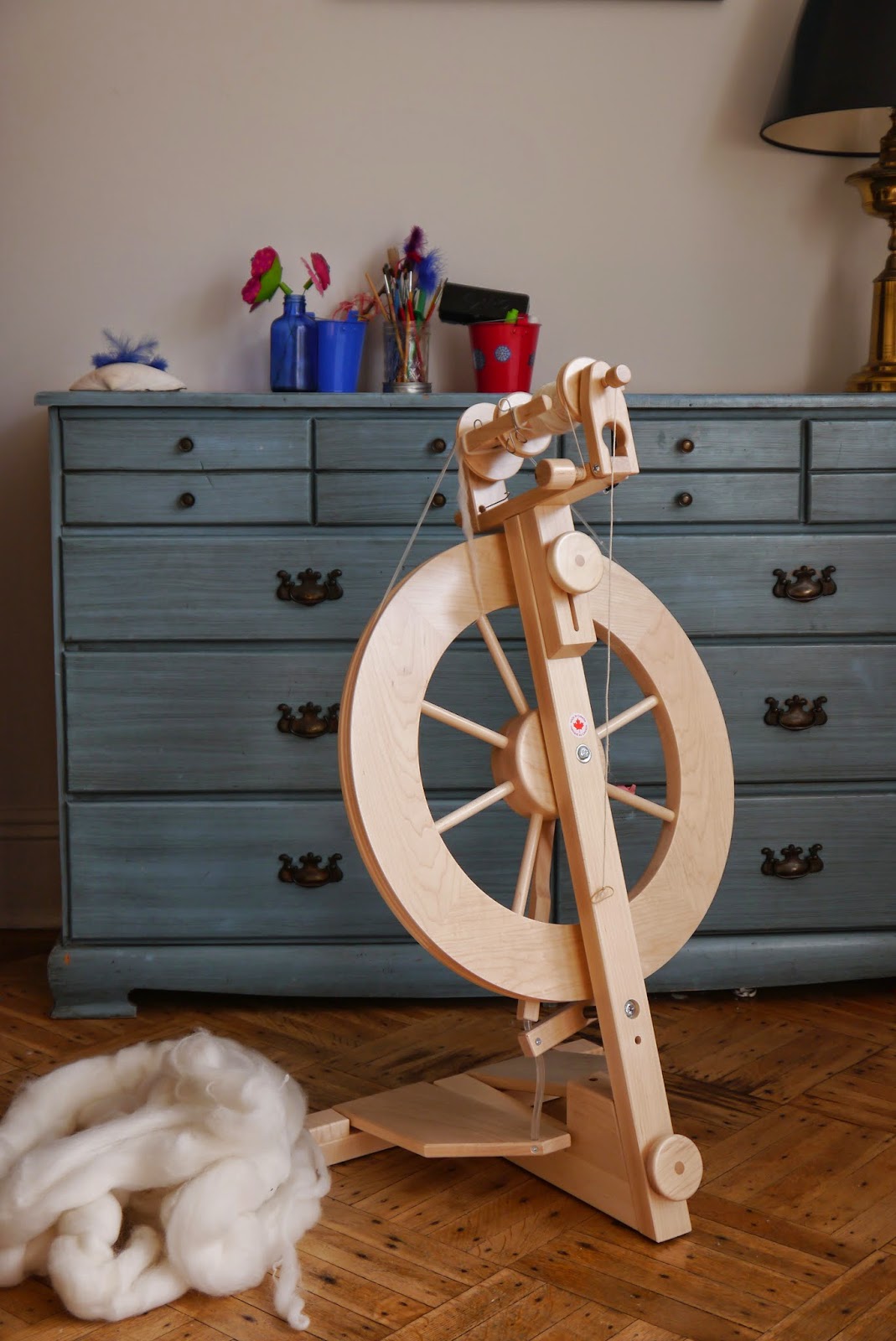 And this to do the fancy spinning.

It's not totally an impulse buy.  I mean, kind of, but bear with me.  I like spinning, I do, but the reason you haven't seen much of it is because I pretty much hate my drop spindle.  And so I thought--well, maybe I don't like spinning.  That seems counter to my essence, but so does me not liking Monty Python (there! I said it!) so I guess anything's possible.

But I love the feeling of the fiber.  And I like drafting.  And so as I poked around and watched some demonstrations and asked some questions, it seemed that disliking drop spindles and liking spinning are not mutually exclusive--in fact, it's a common problem.  I had suspected as much, and so had considered asking for a spinning wheel for my birthday, but then I chickened out because of Monty Python.

Thank God for Rhinebeck.  I got to talk to people who know stuff, I got to sit down and try stuff, I got advice about stuff, and at first it all just seemed like so much stuff and my brain was going to break.

I went to Carolina Homespun's booth and Morgaine sat me down and patiently showed me all the things.  And ooh, the twist does go into the fiber supply if you're not careful!  And it's hard to keep the treadle going.  And it's hard to make the wheel go in the direction you want.  (I read all about that when studying how to use my drop spindle, but it never applied because drop spindle).  And Morgaine seemed like a goddess of spinning and possibly other things too, and I focused and got kind of lost in the spindle, and then all of a sudden it clicked and I was spinning.  I let out a gasp of joy, and cheers and applause rang out and I looked up and a crowd had gathered and I was surrounded by spinners and would-be spinners and I got this huge shot of adrenaline and I bought that Lendrum on the spot.

And then I left.  Because clearly it was time and I had to go before I went and bought a sheep or something.

I came home and immediately set up my wheel.  But the magic was gone.  I couldn't get it to spin right, I couldn't get the fiber to join, it kept breaking, the tension was all wrong, my back was hurting, nothing was going right.

So maybe 9:00 at night while trying to sort of watch a movie after spending a long and adrenalized day walking around was perhaps not the best time to try to make friends with a spinning wheel.

I just spent the last half hour hanging out with it one-on-one and it went much better.  See? 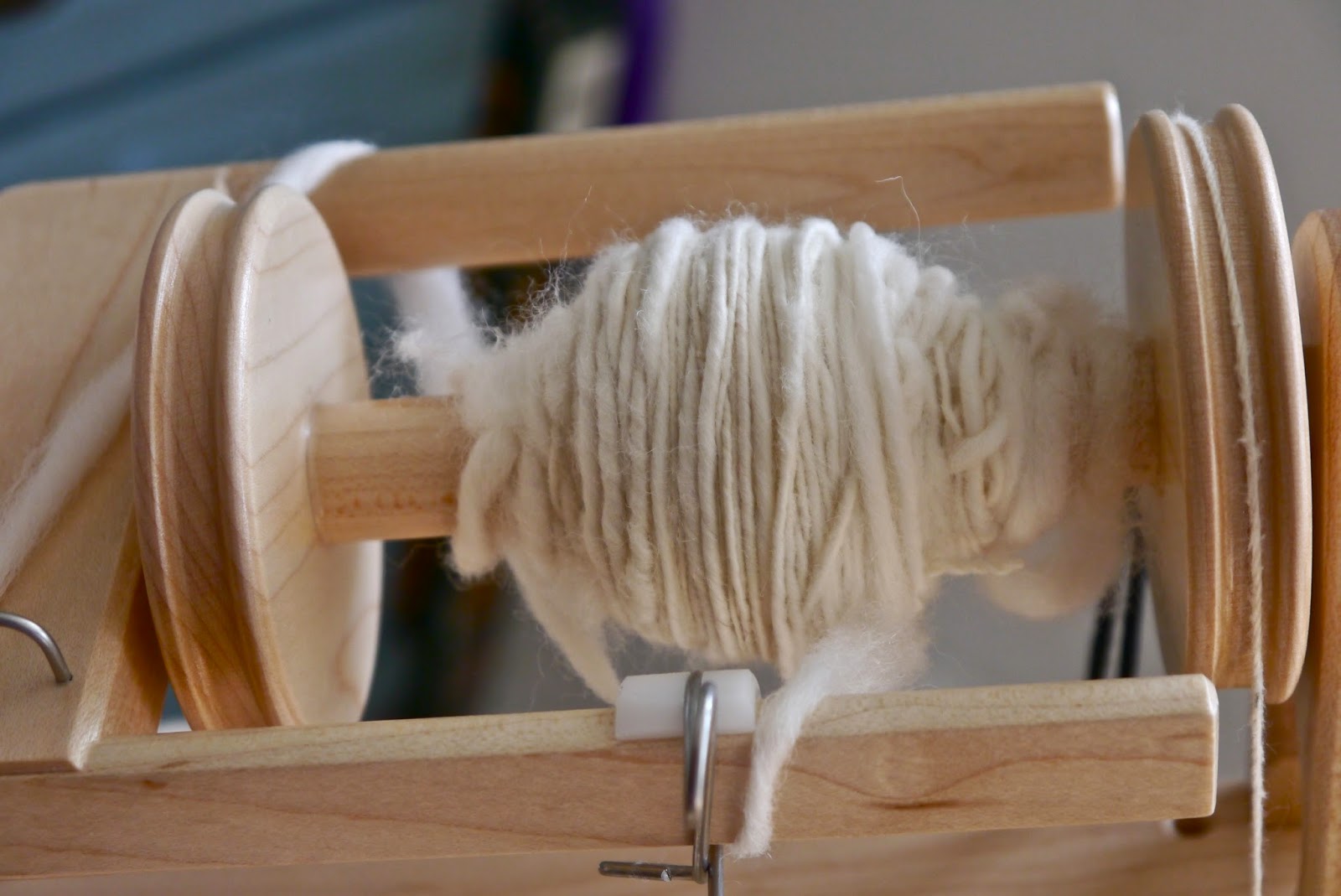 That was a fun read! I've done Rhinebeck alone and loved it. I felt I could enjoy seeing what I wanted without the pressure of ruining someone else's time.
I couldn't get into the drop spindle either. Just keep going on the wheel. The first few times the yarn is a blob and then magically you start spinning really thin yarn. Eventually you start to spin a yarn that you actually want!

I, too, hate my drop spindles. I bought my wheel in February 2011 and while I don't spin as often as I'd like, I do still love it. Oh, and I had to have a "Come to Jebus" talk with my wheel, as well...we get along fine now (unless I'm spinning Corriedale - then we're not friends).