We went skiing this week.  Those of you who have been with the blog for a while know this is impressive because of that time I fell off the side of the mountain skiing and thought I was going to die and declared that there would be no more skiing for me no sir not ever. 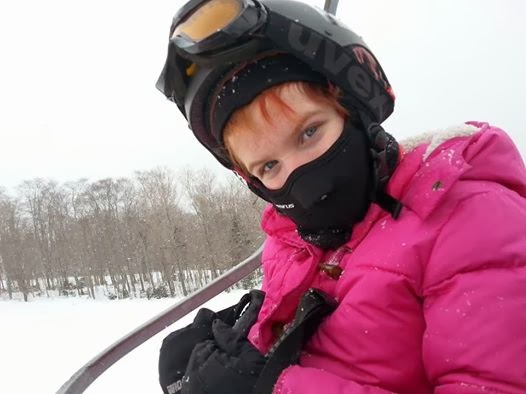 Five years later, I reconsidered.  Not because of any particular desire to ski, mind you, but because Dave loves it, Toaster loves it, RockNoodle loves it, it's a whole family tradition, and it was time for Willow to take part in it, and therefore, obviously and of course, also love it.  I know that I could have waved and said "Have a nice time, y'all, I'll see you at the bar after!" but that's kind of a bummer, because who likes to voluntarily exclude oneself?  And then there's the fear: I fell while skiing with Dave.  Therefore Willow could also fall while skiing with Dave.  So clearly the only thing to do here was to ski with Willow because of course if I were there I could prevent all accidents and injuries, being such an amazing skier myself. 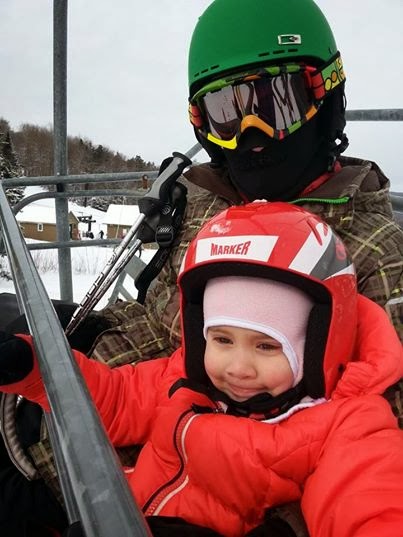 I knew that was dumb.  But if I were going to allow Willow to do something that fills me with fear, I needed to be there watching her to make sure she was okay.  Not being entirely self-delusional, I signed up for a lesson while Dave took her out on the bunny slope.  The worst thing that could happen there was that she could break a bone skiing or falling off the chair lift.  Death was unlikely.

Such was my state of mind starting my lesson.  Luckily, the woman with me was in similar straights, though without quite so much fear.  And also luckily, I am a very competitive person, so I was determined to be more fearless and more awesome than her.  If I'd been in a private lesson we probably would have never left the bunny slope.

I did fine.  I stumbled and fell once, but it was no big deal, and the instructor did precisely what we asked him to--he taught us how to have more control and be able to go as slowly and safely as we wanted to.  I finished the lesson feeling quite proud of myself and went to check on Willow. 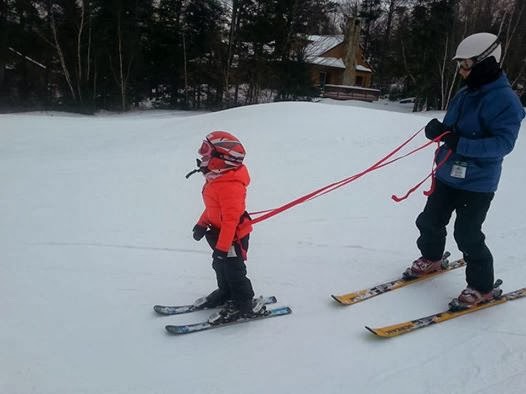 She, as anticipated, was great and loved it.  She wouldn't form a "pizza" with her skis because a) she doesn't like pizza, and b) she understood that was meant to slow her down, and who wants that?  That there leash made me very happy.

I put her down for a nap and went out with Dave.  That was slightly trickier, just because despite Dave's ski cred, he doesn't have "Certified Ski Instructor" on his resume and therefore won't magically be able to protect me from all things. 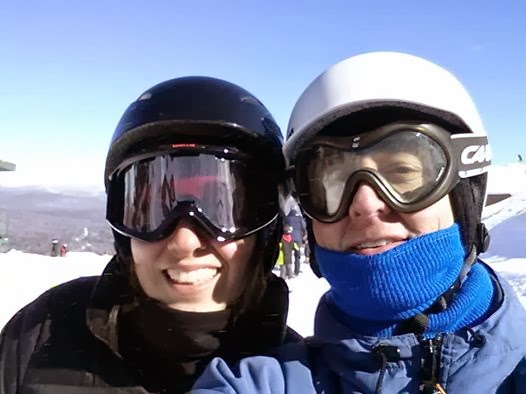 But there we are at the very top of a mountain and I have a smile on my face.  I skied back to the condo fantasizing about how awesome a skier I was going to be and how we as a family would zoom all over the place together.

The next day when Dave took Willow, I went out with Toaster and RockNoodle.  Please take a moment to admire my bravery.  And not only that, I was rockin.'  I kept up with super-speedy Toaster and stopped making the super-wide turns the instructor taught me because I no longer felt like I needed them--I was in control, and I wasn't having to say "wheee!" under my breath to remind me that it was supposed to be fun.  (Yeah, I was really doing that.  It worked.)  I put Willow down for a nap and I went out with Dave and RockNoodle.  She took us on this gorgeous run, absolutely my favorite run, and I was having a great time--and then I hit a patch of ice and fell.

I had fallen before, but this was a harder fall.  Mind you--it still wasn't a big deal.  I wasn't anywhere near the edge, I wasn't in any pain, but I had twisted around and I had a hard time getting up.  A snowboarder yelled at me to get out of the way, which was nice and helpful, since I absolutely could not.

I was hysterical.  I knew I wasn't in any danger, but I didn't feel that way--I flashed back to my fall five years ago and I was sobbing uncontrollably and shaking and panicked.  Dave got me up and back down the hill, and then from some fit of hardy New Englander nonsense, I got back on a lift to ski the run again.  I cried the whole time.  I didn't fall, but I wasn't in control, and I was tense and miserable.

I made it back to the condo and I didn't ski again.  Willow did, and she still had a great time.  I'm not sure what to do at this point.  My reasons for wanting to ski on this trip haven't gone away...but clearly neither has the fear.  And while I don't want to communicate this fear to Willow, I also kind of do because hey I think skiing equals death.