I am a member of that rare tribe--knitters who don't like the cold. I hate winter. Sure, I like being able to wear my lovely wool sweaters and socks, but I can do that in the spring and fall. Winter sucks, for the following reasons:
1. Cold hurts. It makes your muscles tense up, and that hurts. It makes your skin dry out (or the heat in my house does, but since that's because of the cold, it counts) and that hurts. It just hurts.
2. You can't go outside. Because of the aforementioned pain, and because it's dead and ugly out. Not to mention dark.
There are those who love winter (and don't even knit), and Dave is one of them--he thinks it's pretty, and he likes to ski. Skiing seems to make winter palatable for people. And so, in an effort to make winter bearable, I have tried skiing. A brief history:
Skiing Trip The First I was twelve years old, and my parents took me and my sister on a winter vacation. Being from Hawaii and not particularly familiar with snow, this was fairly awesome. ( 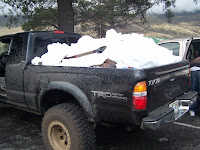 Snow is not a thing of my people. Sure, it snows sometimes on Mauna Kea and that's neat, but it's not real life. We freak out when it snows up there. We drive up and bring it down in the backs of pickup trucks, as if to display some bizarre artifact and marvel at the idea of snowmen on the beach. For about twenty seconds). We wandered around Yellowstone, and went skiing for a few days at Big Sky. This RULED. My dad had just broken his Achilles tendon, so he sat in the lodge.
Skiing Trip The Second After the success of the first trip, we wanted to go again as soon as possible. And my dad struggled mightily not to break anything this time. And so, a few years later, we flew down to New Zealand in August--where it was winter. Kind of. It was about forty-five degrees. This made skiing challenging. We all fell down. A lot. Mostly my dad, as the last time he'd been skiing was twenty something years ago. My sister sat in a puddle of melted snow and cried. We're lucky we didn't kill ourselves.
Skiing Trip The Third My dad and I visited my brother in Colorado Springs. While he was at work, we decided to try this skiing thing again. Kind of. Since my dad had such a miserable experience in New Zealand, and since he surfs, he decided snowboarding was the sport for him. And he said that since he was paying, I had to snowboard too. We got there too late for a lesson, said the hell with it, we can figure this out, went up a lift and proceeded to fall. A lot. Every few feet, in fact. It took us about four hours to get down a single run. And let me tell you, getting up with a snowboard strapped to you is not that easy. We returned to lodge exhausted, sore, and cranky. We returned our stuff and went home.
Skiing Trip The Fourth Dave took me and Toaster skiing three years ago. I was still kind of reeling from my previous two experiences, and suddenly not being twelve anymore, realized that there are big cliffs there, and I don't have much control over what I'm doing and this is pretty freaking scary and OH GOD. Dave tried to help me along, but I was distracted by Toaster who, although a decent skier, was an overconfident one, and seemed to me to be zooming all over the place and about to kill himself. I insisted that Dave stay with him, and I would make my way down somehow and OH GOD.
Skiing Trip The Fifth Yesterday, Dave and I went on a secret ski trip. We were going to go just the two of us, so he could focus on me, and teach me, and I would get comfortable, and then the four of us could all go skiing together and maybe repeat my Yellowstone Vacation of Joy and Wonder someday. We went to a really easy, uncrowded place. We went up to the top of the bunny slope. Where I didn't move. At all. My skis did not slide--Dave slid just fine, if slowly, because really there was no kind of incline, but I was having to push myself down the slope with Dave's poles. This was exhausting and pointless.
So Dave went to exchange my skis. The ski rental guys said there wasn't anything wrong with them, but that the bunny slope was just too flat--we should go on this really easy run instead. We did so.
It was a little steeper than I was prepared for. I was doing okay, though, working on stopping and turning, and making lots and lots of turns because speed, at that moment, was not my friend. We got to one particularly steep and particularly narrow section, and I resolved to take even more turns. I skied to the mountain side, I turned. I skied to the cliff side, I tried to turn. I wasn't making it in time. I tried to stop. I didn't stop. I tried to sit down and stop, because that worked with the snowboard. I didn't stop. I slid over the side of run, bounced off a few rocks, and smashed knee-first into a giant pipe. (Ow, but thank heavens for the pipe, otherwise I'd probaby still be sliding).
I'm okay. Nothing's broken. But nobody knew that at the time, and I was stuck, wedged in against the pipe and afraid of moving and sliding down farther. Also, I was crying hysterically. Dave climbed down, as did a friendly ex-ski patroller, who summoned current ski patrol, and assured me that I was going to be okay.
Ski patrol made me a makeshift splint out of cardboard boxes and really ugly strips of fabric (called cravats, which now strikes me as incredibly funny) said my name reassuringly several times, while I tried to calm down and hang on to their names (friendly ex-ski patroller guy told me his when I barely knew my own). Pete, Dave, and my Dave carefully heaved me up the hill and into a sled, where I was strapped in like a mummy and towed head-first down the hill. That was terrifying. And embarrassing.
I probably could have climbed up on my own, but I was shaky and weepy and scared and in all likelihood would just have fallen again. Plus, they seemed to have no intention of letting me do so. My knee is swollen and sore and feels pretty wimpy, and most of the other parts of me are sore and stiff. I have absolutely no illusions about how lucky I was, but this trip certainly didn't help my confidence any. My dad pointed out that skiing is a sport, and in sports a 1/5 average ain't bad. I told him I hate winter.
Posted by Nikki Van De Car

Jeez, I'm so sorry you smashed up your knee. This totally validates my complete and utter lack of interest in skiing (or any winter sports, for that matter). Not that I needed validation, but you know what I mean. Ugh. I hope you feel better soon!

Hmmmm, I remember this 12-year-old dragging me up to the top of an intermediate ski run in Big Sky . . . not pretty. I also remember a smashing trip to New Zealand where I was the ONLY ONE who didn't fall. Yes!

I mostly skim read blogs but I read every word of your well written and entertaining posts. Poor you, I don't think skiing is your forte, knitting is far safer! Unless of course you sit on a cable needle!

Nikki, really! Skiing is not that difficult. If, IF you try it again, take a lesson. I was your age when I first learned to ski, actually that's the only time I went skiing. Anyway, it's fun once you get the hang of it, really, I promise.

P.S. I have to admit I was laughing while reading about your "accident". Sorry, it just sounds so much like our family!