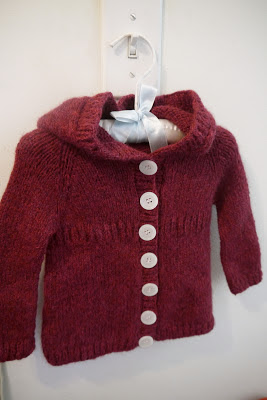 Rowan Lima and I have fought and struggled and compromised and redrafted and said nasty things about each other that I feel like I kind of have a sense of what it's like to be a politician (two guesses as to which of us is the obstructionist).

But, in the end, we have passed something that I think we both find more than acceptable.

This is Little Red, and it's super soft, and only so very slightly swingy.  Knit in Rowan Lima La Paz on US 9 needles, the edging for the buttons and around the hood are picked up after the sweater is finished, which is a technique I should really consider doing more often--way easier to place buttonholes precisely where you want them.

I had wanted this sweater to be a bit more feminine, but Lima strongly disagreed, so much so that I think this turned out fairly unisex...which is nice.  It's not that long (any longer and I think it would have been too girly) and the puffed sleeves and gathered cuffs I wanted were rejected in favor of some light ribbing.  Very well then.
Posted by Nikki Van De Car

I like the color , looks easy to make. Not sure that I would have use white buttons though. Maybe it is me. Is it in the new book? Alice