Rainy Days--and only two of them

It has rained here for the last two days, but it has felt like a week.

I am completely dreading the cold weather.  I have a girl who loves to be outside.  She lives for outside.  With the new walk-to-nap routine, we go out three times a day.  We are doomed, I tell you.

I did my best over the last two days.  I did get one nap in!  Miraculously.  But more than anything, we practiced our cold weather existence. 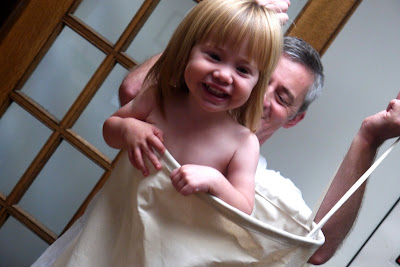 First, there was dancing.  Using Spotify, we went a-hunting for new fun music.  We listened to a cool kid mix that I chose because it had a Tom Waits song and Sarah Maclachlan singing The Rainbow Connection.  And then I kind of stopped paying attention because I was typing an email and Willow was playing by herself and I sort of zoned out until I noticed her yelling "hop hop hop" along with something apparently called The Hoppity Song. 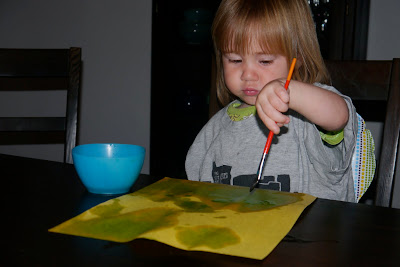 But hopping will only get you so far.  We tried painting (our supplies are limited, so it was food coloring paint.  She didn't seem to care), which was fantastic not only for the time it took up but also because when I gave her one of my old shirts to wear and told her it was a smock, that prompted Willow to produce a whole line of rhyming words: walk?  clock?  smock?  bockbock?

(I think I may have mentioned we're really into Dr. Seuss lately.  "What good to a nook is a hook cookbook?")

That took care of Day One.  Whew, I said.  This cold weather thing is going to be a snap.  All I have to do is stock up on art supplies.

Of course, I hadn't yet done that on Day Two.  No problem, I said.  What's a rainy day activity enjoyed by children from the dawn of time?  Baking cookies!

Oh dear God.  I really wanted to take photos to document the cookie-baking process, but I didn't have enough hands to make and protect the cookies, much less hold a camera.  Suffice it to say that by the time they went in the oven, all the baking soda had been spilled on the floor, Willow's clothes had all been removed due to excessive cookie dough drool, the egg shells had been crumbled, and my hair had frizzed. 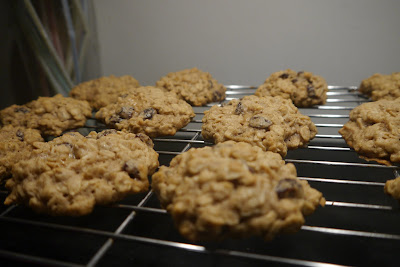 So--harried, but essentially fine.  And the mess turned out to be no trouble at all, since I popped Willow into the bathtub with a small plastic basin, and cup, a funnel, and some warm water, only to discover that this half-assed bath idea was apparently the best activity ever and she would only come out if I bribed her with a cookie, and so I had ample time to clean up. 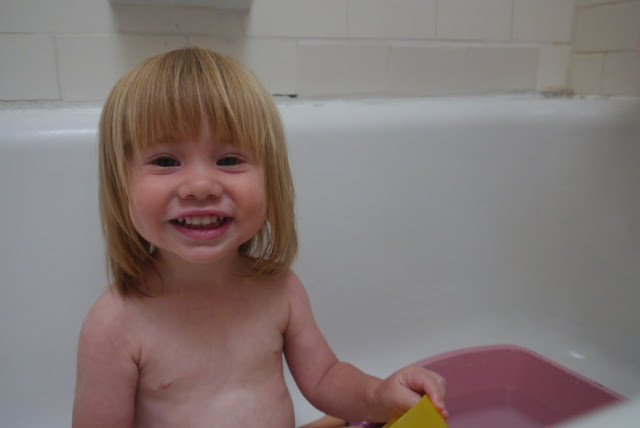 And that was the end our run.  My art supplies had dwindled (crayons?  I hate crayons, mommy!  I break them and yell at them!) the Hoppity Song lost some of its magic, all toys were now boring and despised, and the only thing that Willow found even remotely fun was attempting to injure herself by slamming herself into glass cabinets/walking into walls/eating dirt.  Oh, and throwing food on the floor.

We are doomed.
Posted by Nikki Van De Car

Aww she sounds very cute, love the description of the hop song! The cookies looked yummy!

Independent play. It's a wonderful thing. It'll start soon. Hopefully sooner for you than it happened for us. She'll start making her little dolls and stuffed friends have adventures and you will survive the rainy, wintery days.

You must just collapse at the end of the day! I know I do. We're definitely not looking forward to winter over here, either. The only way we've survived the cold months in the past is by making many trips to the dollar store. Balloons, bubbles, glitter, pipe cleaners... That, and play dates. Still, it's a loooong couple of months.

Anyway, so nice to see Willow getting so big and so beautiful! I love catching up on your posts.