Funny things that have happened recently 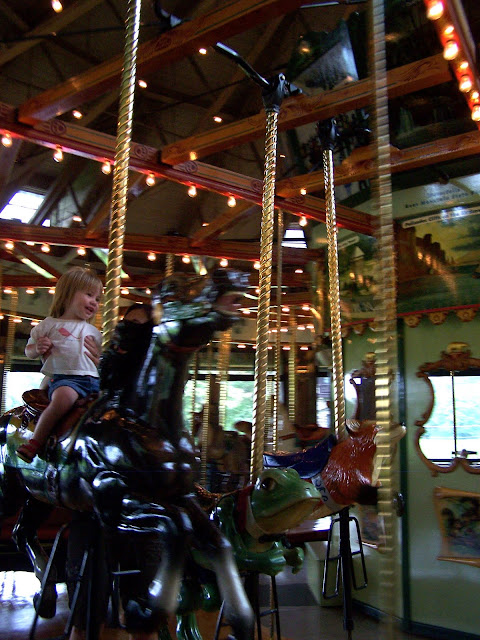 We went to Bear Mountain recently, and hiked (brutal--we're clearly out of shape), and then we went on the merry-go-round.  Willow required a little convincing that this was supposed to be fun: her first ride was suspicious, her second ride was joyous, and her third ride was unavoidable.  We were trying to leave, but she would. not. go.  That horse is about to go flying like pegasus.


We are also spending a phenomenal amount of time at playgrounds these days, since I'm convinced the weather is going to turn arctic at any second and we should get all the climbing in that we can.  Plus, there are other kids there and Willow kind of needs to work on her people skills.  She's very good at seducing the grownups, but seems to think kids her age are good only for their snacks.  Which she steals.  Other than that, they are jungle gym and toy hogs and need to be put in their place. Case in point: Willow and another little boy are arguing over whose turn it is to drive the bus.  There's mild whining and hand-removing, but it hasn't required parental intervention yet (both sets of parents are actually amused, and we joke about how we all argue about whose turn it is to drive, too).  Then Willow employs an unusual strategy--she gives the little boy a hug.  A great big bearhug, and he just kind of stands there like, what?  Oh, okay.  This is nice.

And then she shoves him off the bus and takes her turn at the wheel.  The poor kid just kind of gapes at her, and in a spectacular show of poor parenting, we all crack up.


I wrote that last post partly because I knew that if I did, it would be rendered entirely irrelevant.  And so it has.  The list of words grows and grows, but better even than that, she loves using them.  She won't just say "apple" if you ask her to, she'll say "apple" if she sees a pile of them on a fruit cart.  And she answers questions now!  Not just with an emphatic head shake no, but "would you like to read a story or go for a walk?"  "Walk!"  "Are you ready to go get some breakfast?"  "Yes!"  Or rather, "yes?"  Every yes is said as a question.  I assume that's because I always said "Breakfast?  Yes?"  I've been so used to my questions being rhetorical. 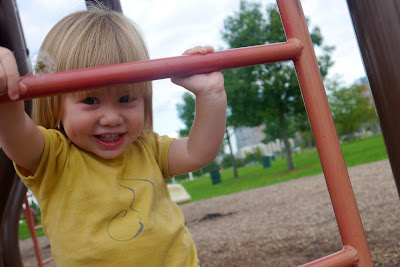 And in a break-my-heart, make me savor every second of every day kind of move, she  spent twenty minutes of playground time practicing her new word over and over: happy.  Happy!  Happy!  Happy!

Although.  I do have to claim a little less happiness about time at the playground than Willow--I, uh, seem to have suffered a mild concussion yesterday.  I was sitting under the jungle gym watching Willow play, when she wandered into dangerous, big kid territory.  I jumped up to grab her, and slammed the top of my head full force into a bar.  I lost vision for a moment (though not consciousness, thank goodness) and Willow kindly wandered back into safety.  I stood there clutching my head feeling a little ridiculous--we spend so much of our days saying "you're okay, it's fine, let's go play," and here I was feeling like I was going to pass out from a little head bonk.  So I went and played.  Half an hour later when the dizziness and nausea was still there, I called Dave saying, uh, maybe you should come home early if you can.  And four hours later when we sat down to dinner,  I vomited.  Not cool.

I'm feeling much better, obviously, and Willow has kindly let me read stories while lying on the couch today.  And it's raining, so I'm spared the dangers of the playground this afternoon though. Anybody else have injuries they can lay at their child's door?  Any black eyes, broken arms I should know about?