Well, let's see.  I could post about how my daughter seems to think that big girls who sit in boosters don't need to take naps, or I could talk about how today is our last day of swim lessons and thank God for that, but instead I think I'll talk about....food.

I may not post about food a lot, but I think about it.  A lot.  I like food.  More than TV, even.  And while having a toddler who refuses to nap of late has hampered my cooking abilities, we do still try.  And so I shall describe for you our dinner of a couple of nights ago, because it is delicious and pleases me oh so very much. 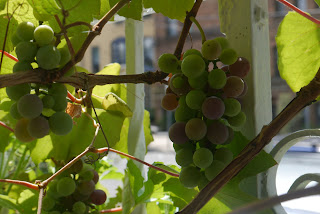 We have a tiny garden on our porch, just a few wooden barrels' worth, but we grow tomatoes and kale and basil and--wait for it--grapes and watermelon.  The last two haven't ripened yet, so I'll have to report back, but the few tomatoes Dave and I have been able to eat have been delicious. 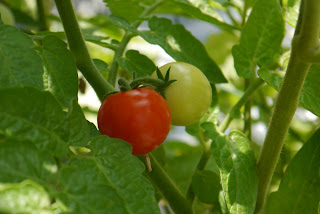 I don't, by the way, mean to imply that our tomato plants are anything less than heavy producers--not at all.  It's just that others get to them before we do.  The squirrels eat up the heirlooms before they're quite ready, and Willow takes a cherry tomato with her every time we step in or out of the house.  She doesn't generally eat them, mind you--she just carries them around, delighted by their very existence.  And then she squishes them before, you know, I could eat them or something. 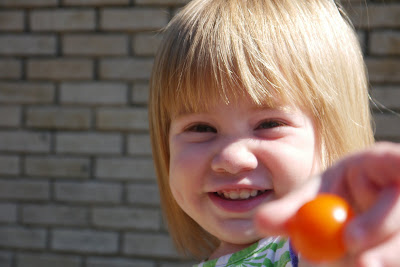 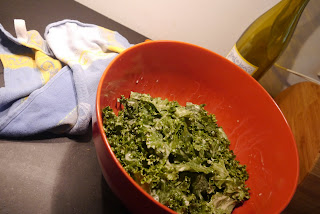 Anyway.  She and I collected a bunch of kale, and then after deveining it I soaked it in a solution of coconut milk, lemon juice, salt, and red pepper.  It was a recipe in the Times Magazine ages ago, and for the longest time I didn't believe the marinating could possibly serve any purpose--it's leaves, after all.  They don't soak in flavor.  But the steeping does seem to help the kale soften up a bit, which is good since it isn't supposed to be simmered at all--we grill it.  The recipe demanded grilling on an actual grill, but our charcoal Weber isn't really up to it.  Or at least Dave's arm hairs aren't.  I just crank up the heat as high as it will go and spread the kale around a large frying pan until it looks done.  It's weird, kind of intense, and delicious. 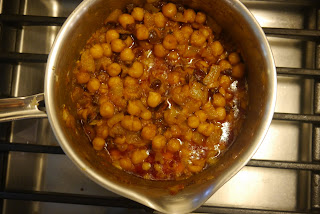 But while I do like healthy food like kale (when, you know, it's been fried in coconut milk) I do not and never will like quinoa.  Dave does.  Even Willow does, sometimes.  I think it tastes like dirt.  And the only way I will eat it without complaining is if I smother it in something really intensely flavored--say for instance, chickpeas with cumin, cardamom, and star anise (same article in the Magazine).

Under all that, you can hardly taste the dirt at all.

And for dessert, I messed around with Padma Lakshmi's plum granita by stewing some fresh nectarines with lime juice, white wine, and basil. 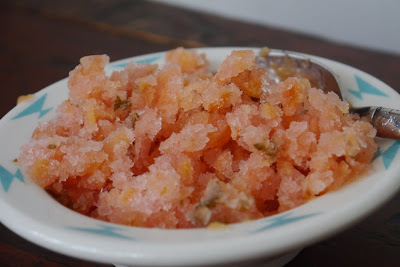 Yum.  I like food.
Posted by Nikki Van De Car

Email ThisBlogThis!Share to TwitterShare to FacebookShare to Pinterest
Labels: food