Willow does not like to do tricks.  On her recent visit, Cousin Francie impressed us with her clapping, her sooooo big!-ing, her standing, while Willow does...nothing.  She can do twinkle-twinkle, and clap, and identify the kitty in the picture, but she just doesn't want to.  She's all "yeah, I know what you're saying, but why would I want to do that?"  Dave and I have joked that we should offer little bits of fish like you do at Sea Life Park, except for how that would be wrong. 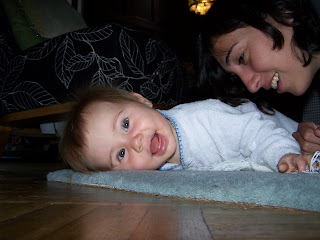 It's the same thing with crawling.  Willow has been threatening to crawl for months now.  She'll see something she wants, go on her hands and knees, rock around a bit, and either give up and flop down on her belly whimpering for us to pick her up, or if we refuse she'll sit up and go find something else to do, like eat bits of carpet.

Last Sunday, we had some friends over for brunch, and they brought their fourteen-month-old, who of course was crawling all over the place.  And Willow was all "Whoa.  Whoa!  What's happening?  How is this possible?  Nobody told me babies could do that!"  (Ignoring the fact that we had been telling her--and showing her--for ages.  Apparently Baby Ike is a better teacher than we are.)

And the next day she crawled.  Six inches.  And then flopped on her belly and whimpered for me to pick her up.  But she crawled!  She had the general mechanics and she knew it was possible, so all we had to do was practice and soon she would be off all over the place and I would wish we'd never invited Ike over and would refuse to open the door to him ever again.  Except this is Willow we're talking about, and so we got little bit more crawling--like, a foot--and more belly-flopping and general "why would I want to do that?" attitude.

Today after lunch we were playing on the floor of the tv room and a cheerio fell out of her clothes.  She saw it and pointed for me to get it for her.  I refused.  She tried to get it, belly-flopped, and started her whimpering routine.  I hauled her back up onto her hands and knees and sat back to see how badly she wanted that cheerio.  She crawled over to it, and she was ecstatic--that must have been the best-tasting cheerio in the entire world!

And I thought "Hmmm." 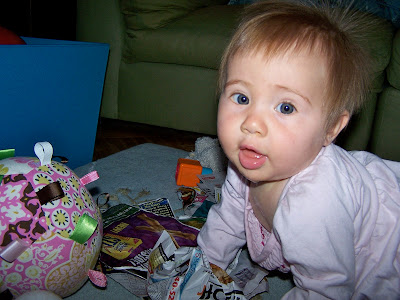 I got a handful of cheerios.  I dropped one three feet away from her.  She crawled to it and ate it.  I dropped another one.  I led her all over the room and back again and she thought it was delightful. I patted her on the head and said "good doggy."

My little crawling baby.  I'm so proud of her.  And so ashamed of myself.
Posted by Nikki Van De Car

I love it!! I hate saying it out loud, but the same techniques that worked with my dog's training also worked with my son, Logan.
Just wait til you try reverse psychology!

Hmm. We get rewarded with paychecks when we go to work... I think cherrio rewards are just fine!!

Imagine what you could get the kid to do for a dumpling!

Love your story!! SO awesome! Dog training works in so many ways!