When Tragedy Turns To Fun

I loaded Willow and all our vast amounts of gear onto my shoulders to head to Brooklyn for swim lessons, when to our dismay all travel across the river was cut off due to some stupid MTA issue.  I was enraged, but in retrospect it's amazing that it has never happened before.  Having lugged a rather heavy baby all the way into the city (if not to the city I was planning on) I refused to go home right away.

But what was there to do down around Battery Park, with a baby and not much else besides some swimwear?  A lot, as it turns out.  Willow had the best day ever.  We found a little cul-de-sac of a park right outside the World Financial Center, which clearly had been marked as "Set Aside For Babies."  Willow kicked some toddler's ball, to the delight of both baby and toddler, ate some leaves, laughed at some pigeons, and generally just enjoyed being someplace new. 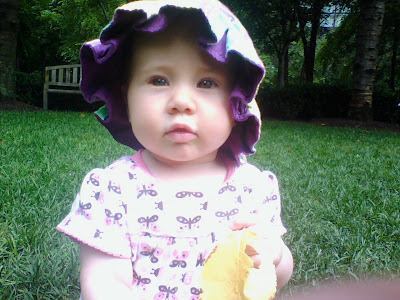 How I wished I had a camera other than my cellphone.  When we got too hot (or rather, when weird nannies got too pushy and insistent that I use Desitin on my child's bum rather than Vaseline, and I was all, lady, go watch your kid and leave mine alone) we headed into the World Financial Center for some A/C and people-watching, and boy, is that place ever good for both.  Between the tourists, the nannies, the hedge fund dudes, there was much too see.

We left for the Battery Park playground, where Willow played in the sprinkler, or rather stood and batted at the water while I flirted with a 15-month-old who wasn't much bigger than Willow but was very chatty and sweet (unlike a certain toddler I could mention, who horned in on tiny Willow and began throwing buckets of water on her--and by extension on me--despite my asking him not to do that). 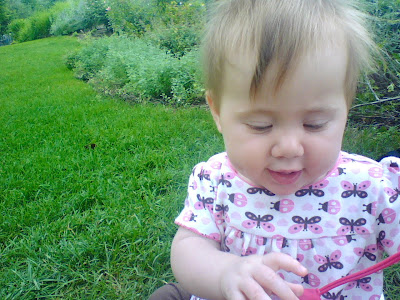 Then we parked ourselves on the lawn next to the basketball courts and watched the boats go by on the river, dogs go by on the path, played with our unused swimsuits, and generally had a fine time.

Note to self: yes, routine is good, but sometimes the easiest days involve doing something new.

So with that thought in mind, Willow and I are off to Hawaii in a couple of days.  (Because a plane will be new and therefore there's no way she'll get bored or fussy on a twelve-hour trip, right?)
Posted by Nikki Van De Car