MYO Food That She Will Eat

First of all, thanks, LJ, for the Smitten Kitchen heads up--I used to read (back when I had time to, you know, read blogs while I was at work), I knew she had a baby, and I completely failed to put two and two together.  I will definitely be hitting that.

But in the meantime, for an update of my own much less knowledgeable and photo-tastic baby food experiments, I bring you AvoNana and Thanksgiving Yams Without The Marshmallows. 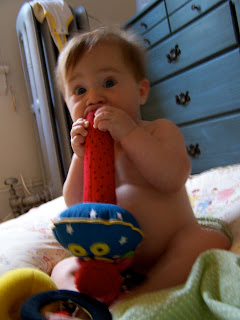 I got it in my head that Willow Must Eat Avocados and Sweet Potatoes or Else She Will Die.   I'm not really sure why,  (I also got it in my head that solid foods = less breastfeeding, which seemed logical enough to me, but Willow emphatically did not agree and started going on sleep strikes and giving me hickeys everywhere to demonstrate her displeasure with this.  Militant member of La Leche, she is.  And in case anybody's wondering, she won.  She is currently breastfeeding more than she was before the introduction of solid foods.  I'm sure this is actually a good thing, I was just sort of hoping to maybe one day not have to wear a sticky-ass, smelly bra on a hundred degree day).

ANYWAY.  The child does not like her avocados and sweet potatoes.  She also doesn't like peas, but I don't care so much about that (logic, you are no friend of mine).  It is my belief that this baby food recipe business is nothing more than trickery--a way to get Le Bebe to eat food she would otherwise refuse in favor of the all-beloved cheerio. 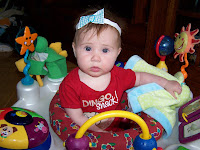 3 parts sweet potato, which have been rinsed, stabbed, rinsed again, wrapped in foil and baked at 400 forever.  Until soft.
1 part apples, steamed until soft.
brown sugar, to taste (I used a tablespoon for 2 lbs sweet potatoes).
cinnamon, to taste (teaspoon).

I know, I know.  I added sugar.  What am I thinking.  But dudes, it tastes good.  And it isn't that much sugar.  I'm sure it could have been left out, but I really really wanted her to eat this, since I was making so damn much of it.

These are her two favorite foods that I have made.  She does eat other things, but these are so popular I thought I'd pass them along.

But nothing, nothing will ever compare to the joy that is Sugar Plums.

I have to confess, I didn't know they were a real thing.  You know, visions of sugar plums, and sugar plum fairies--I figured they were some kind of candied plum business that people did in the way back when.  Indeed no.  They are delicious, and Dave bought them for me, and I don't really get to eat them.  I peel the skin off and feed them to Willow bit by bit (we're a regular English Patient duo) and I get some of the flavor by sucking the skin, but generally speaking I am incapable of getting a bite to her mouth fast enough.  She gets very angry and intense--it's scary.  And it only gets worse the more she eats.  I do have to wonder if someday we will discover that the reasons the children had visions of sugar plums is because they actually have some kind of THC-type chemical and my child is an addict. 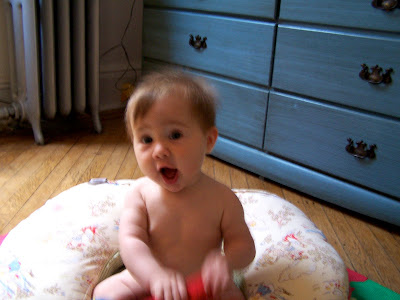