Our Fourth of July was sort of a wash--we didn't have the kids, and it was hot, and we'd gone to the beach the day before, and we had groceries to buy, and babies to visit, so we just weren't feeling very patriotic.

We decided we'd wait and celebrate the Fifth of July.  We'd take the kids out to Swartswood State Park, play in the lake, come home, bake an apple pie, biscuits, corn, and fried chicken (with the exception of the apple pie, all from our new hero, Thomas Keller.  I feel like we should actually eat some of the fellow's food in one of his restaurants if we're going to be all worshipful like we are, but we can't afford it so oh well.  I've gotten half a sandwich from Bouchon Bakery once.) 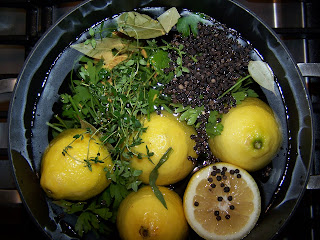 We brined the chicken on Sunday--and incidentally, did you ever think brine could be gorgeous?  I have no more food pictures for you, since fried chicken is not the most photogenic of foods, but check this out:

I want to drink it.

I wish we had pictures of our day at Swartswood to show you, because it was beautiful, but the thing is we were all just way too hot to live, and Willow had been on the go too much, and Toaster was too excited about the arrival of his iPad to do anything but think about the arrival of his iPad, and I was grouchy, and Dave was tired.  RockNoodle was fine, but the rest of us were a downer.  The four of them played in the lake a lot, while I looked at the brown water and the lakeweed and called myself spoiled and stood there looking displeased.  I'm lame.

We got home at 4:30 and immediately had to get to work on the chicken.  I looked at the recipe, laughed, and said, we'll have this again next Fourth of July.  Dave was all, what, it might not be that bad, let's see how it is.  Thomas Keller says it's a weekly staple.  (Ha.  Hahahahaha).

We ate at 8pm.  The kids spent their time playing with the iPad and creating dead body parts out of socks and lipstick.  (I wish I were kidding.  It was bizarre). 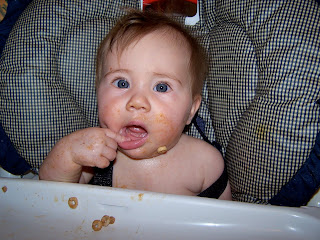 Willow had chicken too.  And cheerios.  Her skin was dry so she thought she'd give herself a food-facial.

Our chicken was delicious.  As were the biscuits.  The apple pie was nonexistent, as we were being way too ambitious, and it was too hot, and we didn't have enough butter, since it turns out we would have needed, like, eleven sticks for the whole meal.

But Toaster didn't like the corn.  He explained that it was getting stuck in his teeth, but his choice of words cracks me up: "I can't eat this corn.  It's making me uncomfortable."

Uh, is the corn touching you in inappropriate ways?

Between the dead body parts and the Dirty Old Man corn, our house is less Good Ol' US of A than I would prefer.  Maybe if we'd made the apple pie. 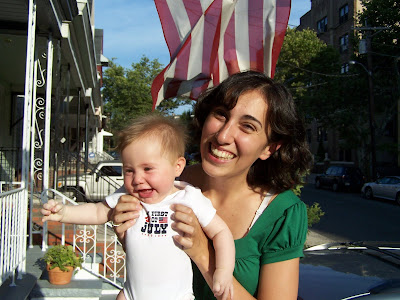 I can't look at the food yet but the bambino is squeeze-a-licious!