So here are the things we're currently working on:

1) Napping not on me.  Verdict?  Successful!  I'm typing this right now!  She is therefore asleep elsewhere than on me!  Actually, she is currently on the floor in Toaster's bedroom, since the house is in complete disarray on account of the electrical work getting entirely redone.  (I want you to just take a moment and think about what that entails.  Complete disarray.)  Watch, now she'll only be able to nap on the floor of Toaster's bedroom.

2) Eating solid foods.  Verdict?  Um, scary?  Not for the reasons you might think, though.  She's just really intense  about it.  You put a finger smear of banana in front of her and her eyes get wide and her whole body quivers and she lunges for you.  It's freaky.  But we've tried banana to obvious great success, avocado to lesser but still intriguing success, and applesauce to straightforward failure.  But we shall soldier on.  She's not really interested in anything the barest amount of flavor--anything that she might have to swallow gets spat out.  I don't think my breasts are going to be retiring anytime soon. 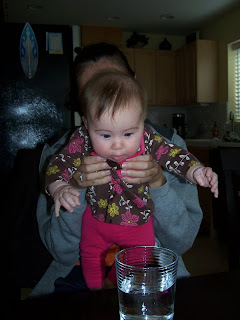 3) Drinking from a water glass.  Verdict?  Semi-successful!  I'd read that you can skip sippy cups entirely, and since Willow appears to be skipping bottles entirely, why teach her to suck on one of those?  But actually, the whole glass thing was her idea.  She got jealous of mine, so I held it up to her to try, and damn.  Did you know that drinking from a glass is akin to smoking crack?  I had no idea.  It's her favorite thing in the world to do.  I have to hide my own water-drinking from her if I don't want to get into a marathon Willow-drinking thing.  (Wow.  I know my sentences are sometimes a little, um, creative, but that one was extra special.)  The reason I have to tag on the "semi" though is because I'm not entirely certain she's actually drinking anything.  A fair amount seems to end up on my shirt, and there's definitely some backwash action.  She could just be lapping at the water and then spitting it out. 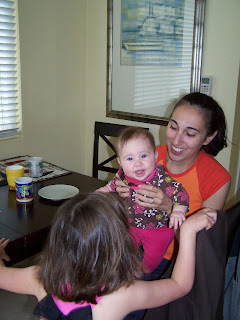 5) Getting Willow to like other people.  Verdict?  Successful!  We took a trip out to San Diego this past weekend for my sister Hannah's college graduation.  The flight was, um, not as fun as the one to Hawaii, but I've been on planes with way crabbier babies, so I call it a win.  But this girl was absolutely charming to everyone she encountered.  She adored her cousin Lauren, mostly because Lauren was willing to spend a great deal of time jumping up and down for her entertainment: 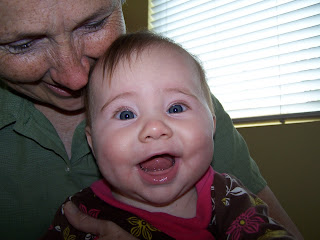 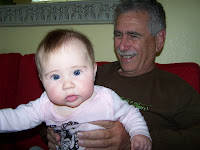 She was way nicer to her grandmother this time, she didn't insist that her grandfather wear his glasses to be interesting, and she was appropriately pleased by her Aunty Hannah, who was nice enough to hold the crying baby while the rest of us played Scattergories.  How's that for a graduation present? 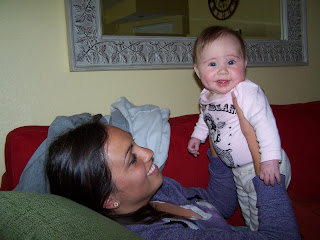 Awww! What a happy girl! Thanks for all the pics. :)