The Cat and The Baby

For all that we love her, Maud is not a very nice cat.  I know this.  She isn't particularly cuddly, unless of course you're not in the mood to pet her--say, for instance, when you're trying to get dressed, or make a cup of coffee, or you have a sleeping baby on your lap.  Then she's totally into you.  The rest of the time she's a hide-under-the-covers, nip-at-your-ankles-when-she's-feeling-frisky, knock-over-your-glass-of-water and howl-at-your-bedroom-door pain in the butt.  And that's with the people she likes.

Houseguests of ours can attest to what she's like to everybody else.  She hisses, she bites, and she doesn't just go away and hide like normal cats that don't like strangers--no, she stalks invaders, and stares at them until they go away.

(As if she knows I'm not saying nice things about her, here she is coming to prove me wrong and being all sweet.  Which she is, often enough.  I exaggerate.  A little).

Given all this, we were a little concerned about what Maud would be like with a new baby.  When Toaster was a baby, Dave's cat peed in his crib (Toaster's.  Not Dave's.  Sorry), and as I understand it, that was a relatively nice cat.  What would Maud do?

The first clue came one night when Willow was shrieking at the top of her lungs, for hours at a time.  Maud came into the room and started rubbing against my mom's ankles, so hard she was almost knocking her over.  Then, when it was clear that this was not calming Willow down, Maud decided that my mom must be making the baby cry, so she hissed at her.  Now, the hissing at my mom was not a new occurrence, but the rubbing at her ankles was, and when Maud repeated all this with me a few nights later, we started to wonder.

And then Maud started sleeping in Willow's crib.  Willow wasn't sleeping in it at the time--she was still in her bassinet, but obviously this wasn't a habit we wanted to encourage.  So we kicked Maud out, and she would constantly jump back in.  Until the day we moved Willow into her crib.  Maud hasn't gone in it since.

On Willow's end of things, she wasn't really aware Maud was alive.  Maud would come and sniff her, and Willow wouldn't even glance over.  Until recently, when Maud jumped up and patiently let Willow bat at her face and pull out a clump of her fur.  "Gently!  Gently!" we said, afraid of reprisals.  But there have been none.  The verdict is in. 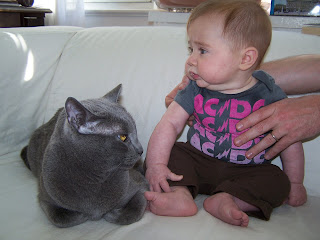 Of course, Maud being Maud and all, this could change at any time, and probably will now that I've written a post about it.  At least we're prepared. 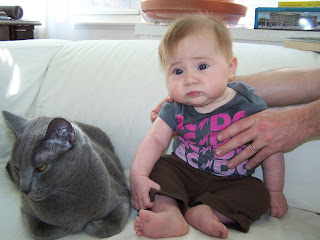 Cute kiddo! Pretty cat, too. Is she a Russian blue? I love gray cats. My cat is not gray. She's swirly dirt colored. And evil. And stick stupid. I had to cover P's crib mattress in double-sided tape to convince her it was a bad idea to go in there. As dumb as she is, she did get the idea after one attempt.

Ha! I wish you'd taken a video of that. Hi-larious.

Maud isn't a breed of cat of any kind--we found her in a junk shop in Buttzville, NJ (real name, I swear) and the other kittens weren't all grey. She may be a pain in the ass, but she's very decorative.

i still can't believe that Willow has actual hair. How fancy!