Toaster and RockNoodle are on Spring Break, and they are spending it like they often do--touring the sights and museums of Manhattan.  That's their mom's gig; we have a car, so we take them out on hikes and stuff, but we leave the culture to her.  But as Toaster was raving about the Tim Burton exhibit and pleading with us to take them to MoMA (though they'd just been) so he could show us around, I figured hey, why not.  I have some time on my hands. 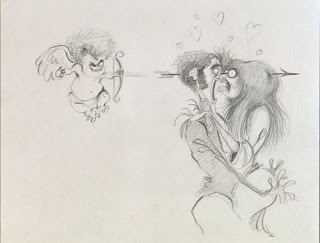 So Willow and I trooped into the city yesterday to see some Tim Burton.  I don't think I have ever seen two children so excited to show off something they hadn't done themselves--RockNoodle and Toaster were each vying for my attention to show me this drawing, that doll, that Edward Scissorhands costume (cool!).  The above drawing is one of Toaster's favorites.  It was a challenge, maneuvering the stroller, maneuvering the RockNoodle who would not let go of the stroller, but it was fun.

And I don't know that anyone had as much fun as Willow.  That baby did not cry AT ALL yesterday.  Not a peep.  She would snooze for about twenty minutes, wake up, look around at everything, doze off again--she was completely fascinated.  I figured she would just sleep the whole time, but no.  There was much too much to see.

After waiting for hours for burgers and then Jamba Juice, we parted ways with RockNoodle and Toaster--they were headed to the Central Park Zoo, but despite Willow's contentment, I wanted her to have some time out of the stroller.  We found a shady spot and I set about unloading her.  A cute little toddler about a year and a half old (I guess) wandered over and began giggling at the baby and licking the none-too-clean stroller.  I looked around for her parents, but saw no sign.  I chatted with her and tried to distract her from both baby-poking and stroller licking, and spread out Willow's blanket.  The toddler promptly started to walk all over it with muddy shoes.  I reached out to stop her and Bam!  Over she went!

Yep, that's right.  I go to parks and topple babies.  That's me.

I picked her up and dusted her off and apologized to her finally appearing father (he thought it was funny).  And Willow and I people-watched for an hour or so.   I avoided making eye-contact with any babies.
Posted by Nikki Van De Car